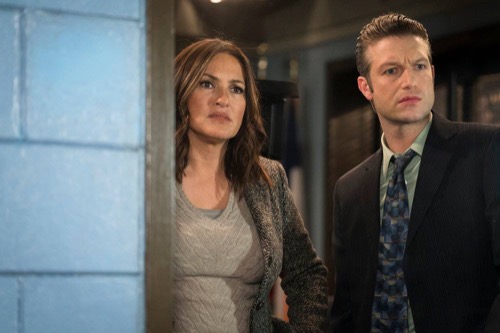 On the last episode, a famous actor was arrested for rape, but then the charges were dropped due to lack of evidence. However, Rollins wasn’t satisfied with that and took matters into her own hands. Did you watch the last episode? If you missed it, we have a full and detailed recap right here for you.

On tonight’s episode as per the NBC synopsis “an investigation into the sexual exploitation of underage Catholic schoolgirls leads to shocking charges against judges, legislators, DAs, and members of the NYPD. Starring Mariska Hargitay, Kelli Giddish, Ral Esparza and Peter Scanavino.”

Tonight’s season 17 episode 17 looks like it is going to be great and you won’t want to miss it, so be sure to tune in for our live coverage of NBC’s Law & Order: SVU at 9:00 PM EST! While you wait for our recap hit the comments and let us know how excited you are about the new season?

Tonight’s episode of Law & Order SVU kicks off with Carisi undercover – he is at a party that Olivia’s team was tipped off to. Rollins, Olivia, and Dodds are watching the camera feed from Carisi in a van outside. Dodds wants to move in – but no one has broken any laws yet. Olivia is concerned, Judge Wheeler is at the party, and so is an assistant district attorney and two council men.

Everyone at the party is drinking, Carisi gets in a fight with Judge Wheeler because he is roughing up one of the girls. One of the men at the party pulls a gun on Carisi and Olivia and her team rush in, guns drawn and badges out. They are shocked when two guys at the party pull their badges out – they have been undercover for two years. He grows at Olivia that she just “derailed a two year operation.”

At the police station, Rollins is interviewing three of the girls from the party – and none of them appear to be 18 years old. They say that they heard about the party from “friends” they met at a Wiz Khalifa concert.

Barba shows up and asks Olivia what the hell is going on. She explains that they received a tip that underage girls would be at a sex party. But, when they busted in they realized that the much older men at the party were ADA Winn from Bronx, two assembly men, a council man, and Judge Wheeler. Olivia says the pimps told the girls what to say and they aren’t giving them any information as to who threw the party. She explains that Russo and Jefferson, two Detectives from Vice were at the party – they are waiting for their captain to arrive and clear things up.

Meanwhile, there is one older women who was at the party and serving drinks – her name is Nina, and apparently she is a nun. Olivia heads in to the interrogation room to try and get info from Nina the Nun. She tells Olivia that she has spent weeks trying to infiltrate the sex ring to save the teen girls. Nina says that she went undercover on her own accord because the police can’t do anything – the men involved are too powerful and have too many connections.

The Vice Captain shows up at the station to talk to Olivia. He demands to know what Olivia was doing at the party – she explains that she got an anonymous tip. The Cap says that this goes “deep” and he can’t risk the operation. He wants Olivia to back off and let it go, it’s a Vice operation. The Cap gathers his detectives and leaves the station. Olivia fills her team in on what the Vice Cap told her. They have no choice right now but to let the Johns go that they picked up at the party.

When Nina the Nun sees the Captain leaving with his detectives, Russo and Jefferson, she is not happy. Olivia tries to explain that they are cops – but Nina won’t hear it. She says that she has seen Russo and Jefferson rape and abuse underage girls first hand. Olivia decides to check out Nina’s story and heads to the Church where she is from. A woman in charge confirms that Nina brings back abused girls all of the time and has been saving them from sex traffickers, one girl named Cara is still at the church.

Olivia sits down with Nina and Cara – she picks a picture of Russo out of a line-up and Cara says that he and Jefferson were always making her and the other girls “do stuff” at the parties. She says that the “dirty cops” used to force them to perform oral sex, one night they got really drunk and took turns raping her. Olivia tries to find out who the pimp is that set up the parties – but Nina interrupts. She won’t let Cara answer any more questions. Apparently, whoever the pimp is, he is a dangerous man.

Olivia and DOdds go to Tucker for advice – he says that he has dealt with Russo and Jefferson in the past, and he doesn’t doubt that they are dirty. He has Russo and Jefferson brought in and questions them himself – Tucker accuses them of raping underage girls, . He threatens to charge them, and tries to get the two dirty cops to give up the target – who is in charge of the parties. Jefferson and Russo won’t give up the target though.

Tucker is stumped, he doesn’t get why Russo and Jefferson and the Vice Captain won’t tell them who is responsible for the parties. Dodds has a theory – he thinks that the Vice detectives are running the sex trafficking ring themselves and are just claiming they are undercover to save their asses.

Tucker learns that two of the girls go to a religious school in the Bronx – his cousin is a priest and a teacher there. Tucker heads to the school to try and get some information. His cousin Father Eugene blames it on gangs, he says that the “gangs” got a hold of the good girls. Tucker does learn something interesting though – apparently Sister Nina has mental health issues, and she shouldn’t be trusted around children.

Rollins and Carisi head to the Church where Cara was staying with Nina to talk to her – but when they arrive they find Cara in her room….and she is dead. Cara apparently overdosed, a doctor does an autopsy and says that Cara took a lethal dosage of heroin. Rollins and Olivia are obviously skeptical, Cara had been sober for 6 months. Nina is an emotional mess when she learns that Cara is dead, and she keeps saying that “they killed her.”

Rollins and Carisi question another nun at the monestary – she says that right before Cara went to her room and overdosed, she spoke to Father Akantola. Rollins and Carisi track down Akantola, he is broken up about Cara’s death but says that no one should be blamed because Cara is “an addict and addicts will always find a way.” He offers to talk to some of the other girls that were staying the shelter.

Tucker freaks out when he hears that Cara may have been murdered – the only person that knew that Cara was cooperating with the police was his cousin Father Eugene. Tucker and Olivia rush to the school to talk to Father Eugene – he accuses his cousin of being on the Vice police’s payroll. Eugene screams that Tucker has turned his back on God, and he is the kids’ guidance counselor – he would never put them in harm’s way. Tucker growls at his cousin that he is coming for him, and he “better get right with his God.”

Meanwhile, Olivia and her team are afraid that Nina may be in danger too – so they have her hidden away at Nina’s house. Olivia brings Tucker to her house to meet Nina, she reassures her that Tucker is on her side and they need more information. He asks Nina if there is someone at St. Fabiola’s School that they need to look at. Nina tells Tucker that he needs to talk to Father Eugene – when Nina realizes that Tucker is Father Eugene’s cousin, she starts acting really strange and says that Tucker needs to go and then she picks up Olivia’s son Noah.

Olivia convinces her to put Noah down, and then Nina starts freaking out. Nina screams that she is not crazy and she is not going back to shock therapy – she accuses Olivia of being in on this with Father Eugene. Nina accuses Olivia of bringing her to her house to kill her, and then she grabs her bag and leaves. Olivia begs Nina not to go – but she is gone.

Olivia heads to the precinct and tells and tells Dodds and Barba that Nina is gone – she became irrational and panicked when she learned that Father Eugene was Tucker’s cousin. Barba tells Olivia he needs to talk to her in private. Barba tells Olivia that the Monsignor paid him a private visit, and he told Barba that he and Father Eugene went to Tucker a year ago and told him about the sex trafficking ring, the judges, and the dirty Vice cops. Olivia defends Tucker and says that he knows there is no way he is doing it. Barba realizes that Olivia is sleeping with Tucker – and accuses her of protecting him, he kicks Olivia out of his office and says that their conversation is over.

Olivia meets up with Tucker later that night, Barba has shut down her warrants. Tucker reveals that in the morning he has to go to a meeting with Group 1, and he is being investigated for sex trafficking and murder. He tells Olivia to stay out of it, he doesn’t want her to risk her job. Olivia gets a message while they are talking, 1PP wants to see her immediately, apparently she is being investigated too.

Rollins, Carisi, and Dodds are all sitting at the precinct and trying to figure out what is going on. Olivia shows up at the office, in a huff, she says that she has been fired and Dodds is now the active Commander. She congratulates him on his promotion – and implies that Dodds is behind getting her fired.