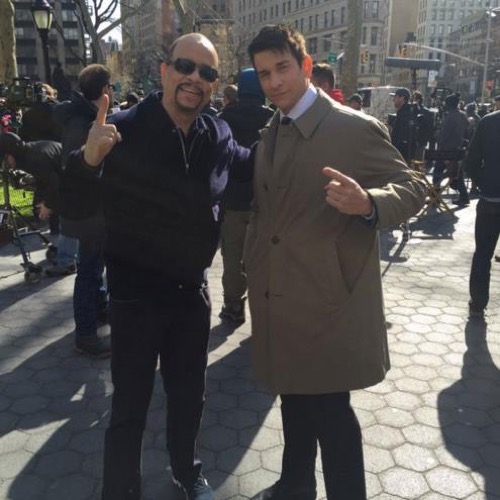 On the last episode, an investigation into the sexual exploitation of underage Catholic schoolgirls lead to shocking charges against judges, legislators, DAs, and members of the NYPD. Starring Mariska Hargitay, Kelli Giddish, Ral Esparza and Peter Scanavino. Did you watch the last episode? If you missed it, we have a full and detailed recap right here for you.

On tonight’s episode as per the NBC synopsis “a squad member is implicated in a cover-up for a sex-trafficking operation involving high-ranking government and church officials, so the SVU team work to sort out the complicated case and clear their coworker’s name.”

Tonight’s season 17 episode 18 looks like it is going to be great and you won’t want to miss it, so be sure to tune in for our live coverage of NBC’s Law & Order: SVU at 9:00 PM EST! While you wait for our recap hit the comments and let us know how excited you are about the new season?

Tonight’s episode of Law & Order SVU kicks off with Dodds’ father briefing Olivia’s team about her temporary leave of absence – he tells them to keep working, and won’t go in to details about why she is being dragged in to Tuckers mess.

Meanwhile, Tucker is at Internal Affairs – he is being accused of covering up a sex trafficking ring. Tucker says that the Priest, Eugene is fueling the whole conspiracy. He tells them that the detectives at the underage sex party are dirty – but internal affairs isn’t buying it. Tucker says they need to find the nun Nina, she will back up his whole story.

Olivia corners Barba and demands to know why he ratted her and Tucker out for being in a relationship. She shouts at Barba that he knows Tucker is innocent, Barba doesn’t exactly seem like he believes that. He tells Olivia that the best thing she can do for herself and Tucker is to stay out of it until the case is solved.

Olivia calls Nina to try and get her to prove Tucker is innocent, but Nina is on the road – she tells Olivia she is leaving town, she has a teen girl with her. After she hangs up the phone, a van pulls up behind her and runs her off the road and forces her to crash her car in to a ditch.

Back at the precinct, Rollins brings Father Eugene in for questioning. Eugene and the Monsignor insist that they sent Tucker a letter telling him about the sex trafficking last year. The dirty detectives, Jefferson and Russo, tell Fin that Tucker took them aside a year ago and said he wanted in on the action.

Dobbs decides that they need to try to track down Nina to see who is telling the truth, they trace her cell phone and it leads them to Nina’s crashed car on the side of the road. Rollins determines that there was another vehicle involved, and it looks like they dragged Nina to their car.

Fin and Carisi track the mini van down to another priest named Father Joseph, he says that he loaned the can to Nina because she said that she was in trouble. Joseph confesses that he and Nina used to be “involved.” Joseph thinks that there was a girl with Nina.

Rollins and Fin get a phone call from the hospital. A teen girl named Natalia was brought in to the ER and had a reported overdose. Natalia explains that a black priest with an African accent drove them off the road. Then he walked them in to the woods, and the priest raped Nina and shot her. He let Natalia live so that she could warn the other girls what happens if she talks. Natalia says that the priest injected her with heroin and left her to die.

That night, Carisi heads out in the woods with the NYPD and the dogs – they find Nina’s body in the woods, and she is definitely dead. Dodds can tell that Carisi is shaken up, Nina was starting to grow on him.

The next day, Rollins and Carisi head to the church – but the nuns are all giving them the run-around. The Monsignor told them not to talk to the cops, it’s not what God would have wanted. Father Eugene, Father Akintola, and the Monsignor all seem to be in seclusion or on full lock-down praying for Nina.

Carisi and Fin track down the address of a loft that Father Eugene rents, a guy named Lance answers the door in his underwear and says Eugene isn’t there. The loft appears to be some sort of sex dungeon – Lance insists that he is just a personal trainer and all of the equipment is for cross-fit. They’re not buying it, they drag Lance down to the police station for questioning.

Lance calls his girlfriend Heidi down to the police station – she’s a lawyer. She is furious when she finds out that Lance was still in a “deviant relationship” with Father Eugene. Heidi says that Father Eugene was stealing money from the church and using it to pay for his creepy sexual fetishes, and she shows them pictures of Lance and Father Eugene having sex on the Church’s altar.

Barba and Carisi sit down with the Monsignor, he says that he had Eugene’s finances investigated and everything checked out, he wasn’t stealing money from the church. A few hours later, the Monsignor hold a press conference. He announces that the NYPD is responsible for the sex trafficking and have been covering it up for years. Then the Monsignor goes on to say that the police were blackmailing Father Eugene with photos from his scandalous sexcapades to help them traffic the girls from the church. The Church calls for the government to step in and take the case away from the NYPD, so that it can be handled by outside sources.

Dodds is being pressured by his father and all of the NYPD brass to drop this case ASAP. Tucker agrees to an early retirement instead of being charged, and the church agrees to send Father Eugene away to deal with his issues. Carisi isn’t okay with this – he thinks that it is a cop out, and someone has to pay for Nina and the other girs’ murders.

Carisi goes to the church late at night to talk to Father Eugene, Catholic to Catholic. After an emotional talk about God and forgiveness, Father Eugene finally agrees to cooperate. He tells Carisi where he can find hundreds of files buried in the yard behind the church. Carisi and the team dig up cases of files and photos – documenting all of the church’s sex trafficking, and the johns that came to party with the teen girls. They have all the proof they need now to clear Tucker’s name – and bring down the church.

The girls in the photos are tracked down and brought in to court to testify against the Monsignor and the priests. They confirm that the priests would bring them to parties and force them to have sex with cops, lawyers, judges, and politicians. Father Eugene takes the stand and testifies against the church. Jefferson and Russo also testify and confirm that Tucker is innocent, and the Monsignor set them up. The NYPD manages to track down Father Akintola at the JFK airport before he flees the country, and they charge him with killing Nina and Cara. Case closed! Olivia and Tucker head out for drinks to celebrate their names being cleared, and getting their jobs back.