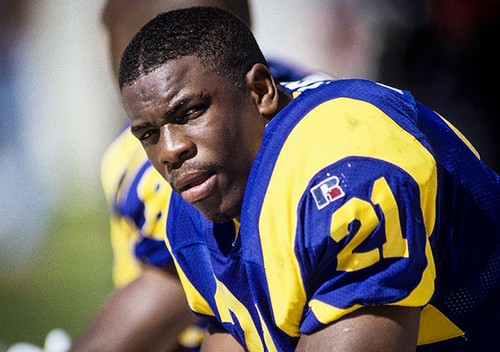 More breaking news linked to the NFL, former running back for the St Louis Rams, Lawrence Phillips was found dead in his cell located at Kern Valley State Prison which is located in Delano, California early in the morning January 13. He was 40 years old.

Lawrence Phillips was a first round draft pick for the NFL and had a successful yet short career as a star running back. He only played for NFL teams which included the St Louis Rams, Miami Dolphins, and the San Francisco 49ers from 1996-1999.

Lawrence Phillips was possibly going to face the death penalty for allegedly killing his former cellmate in April 2015, Damion Soward.

Phillips was in prison originally serving a seven-year sentence for felony assault with a deadly weapon where he drove his car into 3 teenagers, which was to be followed by an additional twenty-five years after that sentence elapsed for a domestic assault on his ex-girlfriend.

This guy was all kinds of trouble. In a sad twist to the report, Lawrence Phillips had written a letter to his mother in March 2015 where he predicted his death as well as the death of his former cellmate, Damion Soward.

“I feel myself very close to snapping,” wrote Phillips in a letter dated March 5, 2015. “My anger grows daily as I have become fed up with prison. I feel my anger is near bursting and that will result in my death or the death of someone else.’’

Yikes. No wonder his NFL career was a short one. He couldn’t keep himself out of trouble. It even seems like he could have had some mental issues that were left untreated and clearly led to the demise of himself as well as all those that were hurt and/or killed at the hands of Lawrence Phillips.

Mixed feelings are all I can think of when a “bad guy” kills himself. Definitely sadness that human life meant so little to him, and then I think of the families of his victims and how this must make them feel.

Drop your thoughts in the comments and let us know what you think about the sudden death of former NFL player, Lawrence Phillips.