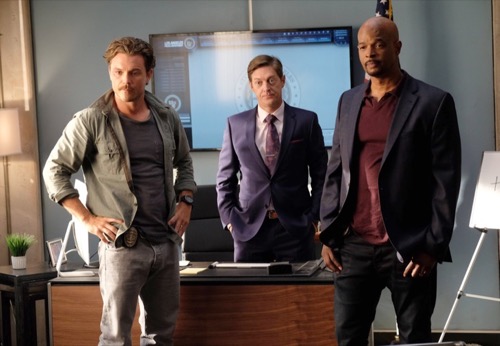 Tonight on FOX their new action drama Lethal Weapon premieres with an all-new Wednesday, September 21, 2016, episode and we have your Lethal Weapon recap below. On tonight’s Lethal Weapon Series premiere, an ex-Navy SEAL-turned-cop relocates to L.A. after the loss of his wife and baby in order to start over.

Lethal Weapon is a reboot of the hit movie franchised that starred Mel Gibson.  The new series follows classic cop duo Riggs, (Clayne Crawford0) and Murtaugh, (Damon Wayans, Sr.) who are working a crime-ridden beat in modern-day Los Angeles. Grief-stricken after the loss of his young wife and unborn child, ex-Navy SEAL-turned-detective Riggs moves to California to “start over” at the LAPD. He’s paired up with Murtaugh, who’s just coming back to the job after a near-fatal heart attack.

On tonight’s Lethal Weapon premiere as per the FOX synopsis, “In the premiere, an ex-Navy SEAL-turned-cop relocates to L.A. after the loss of his wife and baby in order to start over; and is partnered with a detective who’s just returned to the job following a heart attack.”

If this new series is half as good as the movie franchise it is going to be one to watch.  So make sure to bookmark this spot and come back between 8PM – 9PM ET for our Lethal Weapon recap.  While you wait for our recap make sure to check out all our television recaps, spoilers, news & more!

Roger Murtaugh had once been quite happy on the job. Murtaugh had apparently devoted years of his life to the LAPD and he had thought he was finally getting the proper recognition he deserved for all of his hard work when his captain called him into his office on his first day back. But Captain Brooks Avery it seems hadn’t taken Murtaugh’s condition or his long service into consideration because he had decided to place a man that should remain calm with the newbie. The newbie being a hothead from Texas that Murtaugh didn’t even have to meet before knowing that something must be wrong him.

So Murtaugh had clearly had his doubts about Martin Riggs from the get-go, but he hadn’t thought that he would be proven about the other man on the first day they meet. Murtaugh and his quad had been called out to a hostage situation downtown and there he met Riggs for the first. Though, they didn’t really get to exchange pleasantries because their first introduction was Riggs running into the armed bank. Riggs had just gone right in there like nothing was wrong and there was no such thing called procedure so everyone outside had thought that he was going to get killed.

However, Riggs didn’t die when he entered the bank and instead he had spent several minuets inside joking around with the bank robbers. Then he suddenly disarmed/ killed everyone that was a threat. So it was safe to say that Riggs had a death wish and that everyone knew it. Including Murtaugh who tried to get Riggs throw off the force because of what happened at the bank. His captain though said that they couldn’t touch Riggs seeing as he had someone higher up than both of them protecting him so Murtaugh was told to just try to work with Riggs.

Riggs however, was hard to work with. Riggs and Murtaugh had been informed about a DOA so they had driven out to see the body for themselves. Yet, Murtaugh hadn’t thought anything was off about the body until Riggs began pointing little things out. Riggs said that their victim had a silver type dust stuck to the bottom of his shoe that would have shaken off if he had to walk all the way to his alleged suicide so that didn’t add up and neither did the fact that the victim had also told his family that they were moving. The victim had apparently wanted to leave town right away and that sounded like a man that was scared, not suicidal.

So the two men had gone out to see where Ramon was working and unfortunately they made some mistakes while they were there. Ramon it seems had been working for big racetrack types and one of the men that had been there had had a tattoo that looked like mafia tattoo so Riggs had made a mistake. Riggs had confronted the man with the tattoo and that led to a fight with the man’s person security team yet the later fight and car chase was what led to their captain being majorly ticked off with them.

The captain had gotten a call about how his two detectives chased a man into the street where he was then run over by a bus. So the captain had a PR disaster on his hands with what Riggs and Murtaugh did. But he couldn’t fire Riggs and didn’t want to fire Murtaugh so he ultimately decided to simply split them up. The captain told the men that they would have new partners in the morning and so that made Riggs say “good”. Riggs had seen Murtaugh freeze up on the job like he had been too scared to risk getting hurt and he had actually called Murtaugh out on that.

Though Murtaugh had had his reasons for freezing like he did so he had defended himself. Murtaugh had told Riggs that he has something to live for and that he doesn’t want to die. Unlike Riggs who has been running to the danger since the two men met. So Riggs did admit that he played things fast and loose, but he didn’t answer Murtaugh when the other man had asked what happened that broke him. And so for a while it had looked as if the two men were going to part as partners on bad terms yet Riggs had later surprised Murtaugh when he showed up at the other man’s house.

Riggs apparently had wanted to apologize for his comments and if it made Murtaugh feel a certain way. Yet, Murtaugh’s wife Trish had heard him at the door and had invited him inside to have dinner. So the two men were going to suffer through dinner playing nice when naturally Trish asked him about his wife. Trish had seen the wedding ring on his finger so she had been curious about the woman he was almost refusing to speak about though Riggs had initially tried to downplay what happened and so he didn’t confess that he was widower until Murtaugh began joking that the wife must have found his about love affair with guns.

So that little reveal made everyone uncomfortable. However, Murtaugh and Riggs ended up bonding afterwards and it had been Murtaugh’s idea that they continue to the case. Their captain had said that he was handing Ramon’s death off to someone else so the only chance the two men had to investigate what actually happened was for them to working through the night. And so the men left to investigate what Ramon was into and along the way they bonded.

Neither of them had ever thought they would find common ground however they had and so that’s why Riggs did what he did. Riggs had found out that Ramon had stolen heroin from a drug dealer and that the dealer had kidnapped Ramon’s son because he thought the little boy’s mother would hand over the drugs in exchange for her son. So Riggs knew that rescuing the little boy would be dangerous and that’s why he handcuffed Murtaugh to his trailer in order to keep Murtaugh from following him.

Riggs had apparently seen just how much Murtaugh had to lose and he didn’t want to get his surprisingly new friend killed. But Murtaugh followed him anyways and together they were able to take down both a dangerous drug dealer and the man that Ramon thought had been a friend yet who had ultimately betrayed him in the end. So the car chases, the rescuing, and even Murtaugh shooting Riggs to save Riggs’s life had brought them together. And had been what cemented their partnership.

And as for the man that was keeping Riggs safe on the job, that had been his father-in-law who had wanted to thank him for bringing his daughter’s body back to LA.