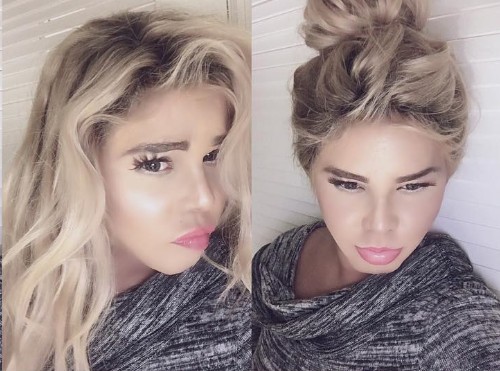 Did Lil Kim bleach her skin? Lil Kim is looking pretty white these days…and her fans are not happy about it. Over the years the infamous rapper has undergone so much plastic surgery that she is barely recognizable, but she still appeared to be African American…until now that is.

Lil Kim took to social media over the weekend and shared some videos and selfies of herself out on the town in Miami with a group of friends at Fontainebleau Hotel. Kim’s followers were shocked when they realized that the pale, bleached blond woman in her photographs were actually the rapper herself.

Some of her followers even joked that she looked like a member of the boy band One Direction (Ouch!).

Of course, Lil Kim isn’t the first Africa American celeb to be accused of bleaching her skin, and she most likely won’t be the last. The sad thing is – she really was a beautiful woman before she began drastically altering her looks.

So far, Kim has not spoken out on the accusations, if we were her we would lay low for a bit – because her fans are not happy with her and several of them made it very clear on social media over the weekend, calling Kim a “sell out.”

Now, there is a chance that Kim just has some state-of-the-art filters on her phone, and managed to make herself appear much paler than she actually is. Even if that is the case, and she didn’t bleach her skin, it still raises the question – why is she so determined to look like someone else?

Lil Kim’s early career was based on empowering women and encouraging them to feel comfortable in their skin – maybe it is time for her to start practicing what she preaches.

Do you think Lil Kim got her skin bleached? Or are her photos just extremely edited? Let us know what you think in the comments below!