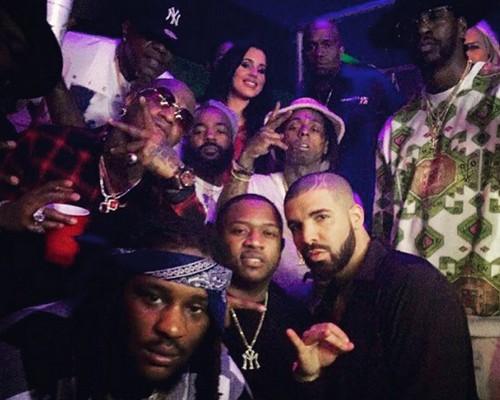 Lil Wayne and Birdman have ended their ugly feud and were even photographed together at Drake’s New Year’s Eve party at in Miami. It was a YMCMB reunion at the E11even nightclub in Miami where Drake, Mack Main and 2 Chainz were also partying.

Fans are stunned after Lil Wayne and Birdman posed in a group shot together during Drake’s party. The only way Wayne and his mentor would be willing to even be in the same nightclub, let alone pose for a picture together, is if they finally decided to end their very bitter feud.

Young Money president Mack Maine posted a star-studded photo to Instagram that showed Wayne and Bryan Birdman Williams looking pretty comfortable in a group shot. “United We Stand Divided We Fall!!” read the caption, letting everyone know the beef has been squashed but nobody knows exactly why or how.

Weezy started the public dispute with Birdman in December 2014 with a serious of tweets blaming Birdman for the continued delays in the release of his upcoming album Tha Carter V. Wayne explained to fans that his album was ready and that he wanted to release it but Cash Money Records refused to release it.

In a fit of frustration, Weezy fired off, “I want off this label and nothing to do with these people but, unfortunately, it ain’t that easy,” he continued. “I am a prisoner and so is my creativity. Again, I am truly sorry and I don’t blame ya if ya fed up with waiting for me and this album. But thank you.”

There was even talk that Drake and Nicki Minaj might also be upset with the label and there were rumbles that all three rappers were considering leaving Cash Money and Birdman. Weezy even sued Bryan Birdman Williams for $51 million in January 2015, claiming that his boss was holding back millions due for the unreleased album.

In addition to suing for quite a bit of cash, Weezy also made it clear that he wanted out of his contract in order to start releasing music again.

Lil Wayne definitely suffered financially due to his album’s continued delay. The rapper was unable to pay his bills, leading to lawsuits and ultimately a raid on his home. Police were sent to Weezy’s Miami mansion to seize and auction off valuable art to satisfy his upset creditors. It seemed as if Bryan Williams was putting a financial squeeze on his protege on purpose.

Does the YMCMB reunion at the E11even nightclub in Miami mean new music from Lil Wayne is coming soon? According to Mack Maine’s Instagram caption, it looks like the answer is yes. What other reason would so many members of the YMCMB offshoot from Cash Money Records all be together at the same party with Birdman?