Lily-Rose Depp Over Amber Heard and Johnny Depp Divorce: Clowns For The Camera With Friend 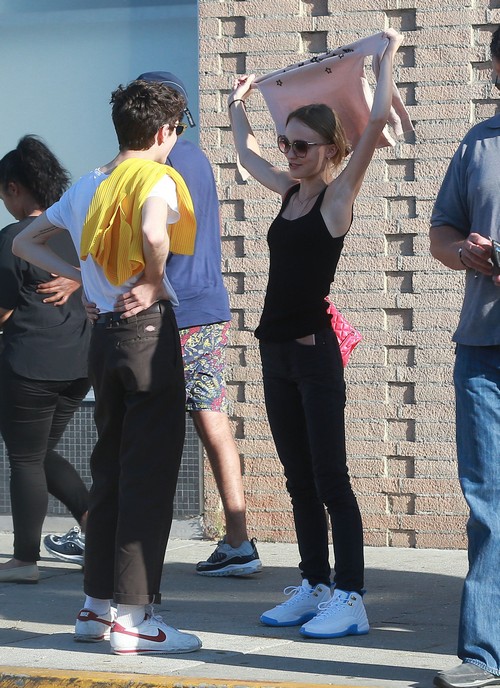 Lily Rose-Depp doesn’t seem too torn up about her father Johnny Depp and soon to be ex step-mother Amber Heard’s messy divorce and legal battles. The 17 year old actress and model was spotted out and about on Tuesday July 5 2016 with a friend and without a care in the world.

Lily Rose-Depp, the daughter of Johnny Depp and Vanessa Paradis was spotted in Hollywood, California yesterday grabbing a bite to eat with friends. Lily seemed not only unfazed by all of the drama surrounding her family, but the teen was actually in an exceptionally good mood.

Lily and her friend were photographed dancing and singing while they waited for their car at the valet. Coincidentally, they weren’t the only celebs waiting at valet, Charlize Theron was there as well, but the two women didn’t even acknowledge each other.

Lily Rose-Depp has always marched to her own drummer, of course, who would expect anything different from a child of Johnny Depp’s? The 17 year old has been in and out of the media over the past few years, and made major headlines when discussing her fluid sexuality, in 2015 she was part of IO Wright’s Self Evident Truth Project, and she confirmed she was a member of the LGBTQ community.

Since her father Johnny Depp’s messy divorce and alleged abuse scandal went public, Lily has stood by his side and publicly defended him. When the original story broke claiming that Johnny Depp had abused his wife Amber, Lily took to Instagram to shut down the rumors.

The teen spoke highly of her father and stated on Instagram that he was a “wonderful father to her and her brother” and went on to praise Depp for his kindness.

So, do you think that Lily Rose-Depp is handling her father’s scandal well? Is it a bit strange that she was out having such a good time with all of the drama and accusations flying? Share your thoughts in the comments below!

Model Lily-Rose Depp and a friend are spotted out for lunch in Hollywood, California on July 5, 2016. Lily and her friend could be seen laughing and dancing as they waited for their car at valet. FameFlynet