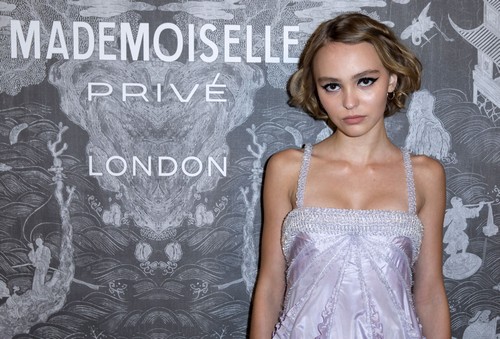 Lily-Rose Depp recently admitted that she is not 100% straight and refers to herself as sexually fluid but Johnny Depp is totally okay with that and says he’s known for a while. The elder Depp is proud of the relationship he has with 16-year old daughter Lily-Rose and says that his girl doesn’t keep secrets from him.

So it was no surprise when headlines started springing up about Lily-Rose’s sexuality because Johnny already knew how she felt.

The declaration about Lily-Rose’s sexuality came about back in August. In a recent interview with Daily Mail, Johnny revealed, “‘She’s got thousands of followers on social media, and they were all taken completely by surprise.” Depp went on to say, “But not me.

I already knew because she tells me everything – she’s not afraid to say anything to me. We’re super-tight and I’m very proud of our relationship.”

For those not in the know, being sexually fluid means not identifying as being 100% hetero or homosexual. Instead, sexual fluidity is the idea that sexual orientation changes over time and just because she might want to date someone of one gender now and necessarily not the same gender later.

So basically Lily-Rose Depp is just saying she might date a female or she might date a male. Those who claim sexual fluidity are more interested in connecting with a person than worrying about which box they fit into.

Johnny Depp has talked about how intelligent his teenage daughter is and he looks to be right. The up and coming model is just 16 years old and seems to be dealing with her born star status with grace. The younger Depp was just tapped by Karl Lagerfeld to model and has a couple of film projects in the works.

Lily-Rose posts a lot to her Instagram page and talks about things she finds interesting and important. She recently discussed the topic of the terrorist attacks on Paris. Lily-Rose Depp is the daughter of French film star Vanessa Paradis and claims Paris as her home.

It looks like we will be seeing plenty of Johnny Depp’s daughter as she continues to make quite a name for herself and it will be interesting to see who Lily-Rose Depp dates and spends her time with after proclaiming on Instagram that she is sexually fluid and just loves whom she loves.