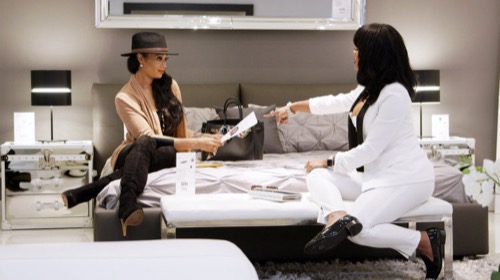 Tonight on VH1 their series Love & Hip Hop Atlanta airs with an all new Monday May 2, season 5 episode 5 called “Watch Your Back” and we have your weekly recap below. On tonight’s episode, Joseline Hernandez gossips about Karlie Redd, Stevie J and KK; Kirk Frost’s daughter asks for help with her music career.

On the last episode, Joseline returned to Atlanta; Scrappy and Rasheeda worked out their issues; Karlie let it all hang out; K. Michelle shows up. Did you watch the last episode? Did you miss it, we’ve got a detailed recap right here for you.

On tonight’s episode as per the VH1 synopsis, “Joseline gossips about Karlie Redd, Stevie J and KK; Kirk’s daughter asks for help with her music career; and Tommie’s suspicions about Scrapp continue to grow. Later, Mimi worries about Stevie J and Chris meeting for the first time.”

This week on Love and Hip Hop Atlanta Joseline continues to threaten Karlie Redd with putting information out on the blogs. She says “I not only have something for Karlie but for everyone who talks about me.” Karlie is angry and tells her “No matter what you and I have gone through I have never talked bad about you.” Joseline tells her “I am doing what I have to do to protect myself.” Karlie is absolutely stunned.

Rasheeda is working to end the feud between Scrappy and Kirk. Kelsie is also performing. When she is done Kirk and Rasheeda talk to Kelsie about her performance. Rasheeda tells her “You need to work on your stage presence and projecting your voice.” Kelsie asks them about them signing her to their label. Kirk tells her “You’re almost there.”

After talking with Kelsie Rasheeda tells Kirk “Come on we have some other people to talk to.” She leads him over to the table where Scrappy is sitting with Young Joc and Kirk is not happy. He says “Here I am trying to support my wife and now I have to deal with this mess again.” After talking to Scrappy Kirk says “After talking to Scrappy and him mentioning Kelsie I realize that it wasn’t about us being there it was about the possibility of him losing his daughter.” The two men apologized and hugged it out.

Stevie J and Joseline are planning a party for the release of her new video “Church”. They are looking at a beautiful room and decide that they want to hold the party there. While they are there Karen King shows up and Joseline mentions that Stevie and Karen had something going on. Stevie and Karen are appalled by her accusations. Stevie says “I am the godfather and this is family. There has never been anything between us.” Karen says “I am going to give her a pass today because she is a little kooky.”

Later that night Joseline and Mimi meet up to go furniture shopping for her new house. Mimi says “I don’t fully trust Joseline, but for the sake of Eva I am going to try and make peace.” The two of them are walking through the furniture store and Joseline says “I heard that you have changed teams.” Mimi tells her “Yes. I am now dating a woman.” Joseline switches gears and tells her “I am having a video release party and I want you to come. I also invited some other people.” Mimi looks at her suspiciously and asks her “Who else did you invite?” Joseline smiles and says “I invited everyone.” Mimi looks suspicious. Joseline pulls out a bunch of papers and shows them to Mimi. She tells her “This is all of Karen’s information.” She has copies of Karen’s mug shot and other criminal records. Mimi is stunned and says “This is the Joseliine I know and remember. She has barely set foot back in Atlanta and already she is stirring it up.” Joseeline invites Mimi to the party and tells her to bring Chris.

Scrapp is at his brothers mix tape release party talking to him about the situation with Tierra and Tommie. Karen shows up at the party and sas tries to talk to her about the situation with Scrapp and Tierra. Karen refuses to give an inch. Scrapp says “You two need to have a sit down and just talk.” Karen says “I will never be able to sit down with that woman. She is not my family.” Scrapp tells her “You are so selfish.” Karen says “You’re absolutely right.”

After talking with Joseline Tommie is really upset. She shows up at Scrapp’s house and starts tearing it apart looking for the other woman that Joseline told her about. Scrapp is upset and he and Tommie begin yelling at each other. Tommie says “I don’t know who to believe. I am starting to think that Joseline was just messing with my head. I am also starting to think that I might be better off without any of them in my life.” She throws money on the floor and storms out of the house. Once she gets outside Tommie realizes that she can’t find her keys. She says “I need to find my keys so I can leave before I do something I am going to regret.”

Stevie J, Scrapp Deleon, Scrappy and Kirk all go out paintballing. Scrpp tells the guys about his issues with Tierra and Tommie. He tells them about Tommie popping up at his house looking for another female. Stevie tells Scrapp “You can address the situation when you see Joseline. I’m inviting you to the premiere party.” Scrapp is not sure about the whole thing.

Mimi is having her housewarming party. All of the ladies are there and Tierra shows up. Rasheeda says “I didn’t even recognize this young lady standing up because the last time I saw her it was going down.” Tierra says “I apologized to Mimi and she accepted.” The ladies are sitting around talking about the Jordans party. Mimi says “I have to get along with her for the sake of my child.” While they are talking the doorbell rings and Karlie arrives. Mimi tells her that they are talking about Joseline’s party. Karlie tells them about the meeting where Joseline threatened her. The ladies are appalled. Tammy says “I would never blackmail someone I called my friend.” K Michelle tells the group “Joseline always has an ulterior motive and you better watch yourself with her. She is no one’s friend.” Arienne asks for a show of hands for those who are going and Mimi is the only one who raises her hand. She says “I am going because Stevie has never met Chris and he wants to meet her.” K Michelle tells her “You better watch your back too.” All of the other ladies agree.

The night of the party Chris and Mimi are there. Mimi asks her “How do you feel?” Chris tells her “Honestly I am a bit nervous.” Joseline and Stevie come in and come over to Chris and Mimi. Joseline says “Who is this young lady?” Chris says “I am not that young and not necessarily a lady.” Joseline then turns to Mimi and asks “Does she have better tongue action than I do?” This comment upsets Mimi immensely and she says to Joseline “That’s not cool.” Meanwhile Chris says “The fact that Joseline has to remind me that she and Mimi had a threesome before we were together is really disrespectful.”