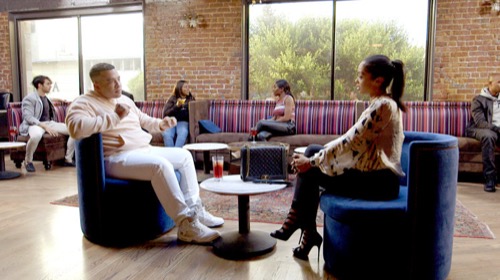 Did you watch last week’s episode where Moniece “Kali” Slaughter got even with Brandi Boyd; Ray J helped Safaree in his attempt to reconcile with Nikki Mudarris? If you missed it and want to catch up, we have a full & detailed Love & Hip Hop Hollywood recap from last week, right here for you!

On tonight’s episode as per the VH1 synopsis, “Masika and Fetty Wap have a disagreement; Nikki takes an introspective look at herself; and Brandi and Princess move forward with their plan to exact revenge on Moniece. Later, Lyrica’s mother makes an odd request for her daughter.”

On this week’s episode of Love and Hip Hop Hollywood, Shanda meets up with Nikki to do some yoga to help relieve some stress. She tells Nikki, “My husband told me that he did mess around with her, so we are living in two separate places.” Niki says, “Wow that has to be hard. What about the kids?” Shanda says, “It’s hard keeping it from the kids, and while Willie may not be the best husband he has always been a good dad.” They move on to talk about Nikki’s situation with Rosa and Safaree. Nikki tells Shanda, “I was using the two of them to cover up my hurt over losing my brother.” Shanda asks her, “Have you spoken to either one of them?” Nikki tells her, “No. I haven’t talked to either one of them recently.”

Brandi tells Max about the incident at Moniece’s listening party. Max is very upset. He tells Brandi, “I got your back. You have to know that you can’t go around fighting everyone with your fists all the time, but Moniece should never put people’s personal business out there on the mic. If Masika wants to join the Moniece revenge train then she can go find someone else to do her music.”

Moniece meets up with Nia, and Masika to talk about what happened at her listening party. After rehashing the incident, she tells the other two ladies, “Brandi has attacked my motherhood too many times and the time to take her down was right then and there. There will be plenty of other listening parties for me in the future.” Masika tells her, “We all know that you are a great mother.” Moniece thanks her and then asks about the situation with Fetty. Masika says, “I worry about who he has my daughter around when he is on tour. He is finishing up his tour here and then we are going to sit down and talk and see what happens.” Nia says, “This is the real Mommy’s club right here.”

Princess meets up with Jason Lee to try and dig up more dirt on Moniece. She tells him about the incident at the listening party. Jason asks Princess for specific details about the listening party. Jason is reluctant to help Brandi, but he would love to help Princess. He says, “Brandi would have to give up a whole lot for me to help her out.” Princess says, “I heard that you have a sex tape with Moniece in it.” Jason says “Oh yeah it’s amazing.” Princess asks, “Would you give it up?” Jason says “I would do anything for you, but Brandi not so much.” Princess says, “Would you at least sit down with her?” Jason agrees.

Lyrica meets up with her mom and they talk about her eloping. Lyrica asks her mother, “Did you think about me when you broke the picture?” Her mother says, “No. Did you think about me when you ran off and got married?” Lyrica is frustrated. Her mother tells her, “I want you to do something for me.” Lyrica asks her, “What?” Lyrica G tells her daughter, “I went to the Dr and even though I have been hiking every day I can’t seem to lose the weight. I want to have Lypo and I want you and your husband to pay for it.” Lyrica bursts out laughing. She tells her mother, “If I do this then you can never bring up me and A1 eloping again.” Lyrica G tells her, “I agree not to bring up the elopement until your husband does something else to upset me.”

Fetty meets with his friend Ikey to work on his mixtape. After they finish with the music, they start talking about the situation with Masika and his daughter. He tells Key, “I am going to tell her I don’t want to be in a relationship or fake love with you or anything like that. I just want to take care of my daughter.” His friend seems to understand. He tells Key, “No matter what she says about me we are not going to be a family. My daughter is going to be my daughter for the rest of her life and I am going to take care of her.”

Nikki is at her parents’ house reflecting on the death of her brother Omar. Her mom is talking about how hard his death has affected her. She says, “The moment I lost him a part of me died.” Nikki tells her “I don’t like coming here anymore. It is uncomfortable coming here.” Her mom tells her, “I can’t even go in his room.” She tells her, “In order for me to achieve any piece i think I need to be out of here.”

Masika is at home She is upset that Fetty has not come to see their daughter. She says, “I am so upset because he has made promises about what he is going to do for her and for us and he hasn’t come through. I have to decide whether to cut it off or let it continue.”

Princess and Brandi meet up with Jason to discuss getting their hands on the tape. Jason is not receptive to Brandi’s gift of sunglasses. Jason tells her, “There is something that you can do to get your hands on this.” Brandi asks him, “What can I do for you Jason?” Jason tells her, “Hop on one leg and bark like a dog.” Brandi cannot believe he is serious, but she does as he asks. He tells her, “I am a man of my word and you have a deal.” Brandi asks him, “Are we friends now Jason?” He tells her, “Yes, we’re cool.” Princess raises her glass and says, “It’s a scary day when your enemies link up.” Jason laughs and says, “Cheers to that.”

Masika and Teairra are hanging out. She asks Masika, “I see you and Fetty are going at it again. I thought you guys were good.” Masika says, “I thought he wanted to be a full time dad, but he hasn’t shown up and he thinks it’s ok to just pop up at 10:30 at night. That’s not cool.” Teairra tells her, “You can’t be the best mom you can be if you are in the middle of all of the mess.” Masika tells her “I am not trying to go down this road because I know where it leads.”

A1 and Lyrica have a family gathering at the park. Lyrica G and Pam get into an altercation. A1 tells Lyrica G, “I don’t like the way that you sat your daughter down and told her that the only way that you would accept our marriage is if we would pay for your lipo. I did bring you something at a lower cost.” He then pulls out a waist trainer. Lyrica G is very angry. She tells him, “That is so disrespectful. Tell your fat momma to wear it!”