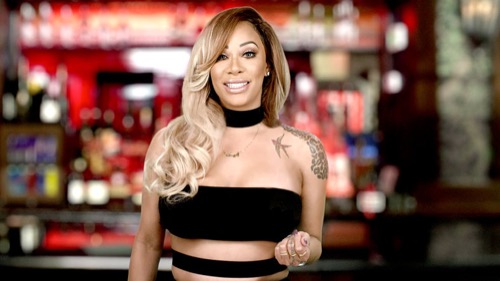 Did you watch last week’s episode where Brandi’s revenge plot got back to Moniece and Fizz, Ray J and Princess’ relationship quickly turned sour, and Lyrica’s mom went to extremes for revenge against A1? If you missed it and want to catch up, we have a full & detailed Love & Hip Hop Hollywood recap from last week, right here for you!

On tonight’s episode as per the VH1 synopsis, “Lyrica takes steps to bring peace between the two mothers. Moniece is on a mission to find the source of the sex tape leak. Princess has issues with Ray and Sonja leading up to the marriage. Teairra is forced to face her demons.”

On this week’s episode of Love and Hip Hop Ray is still struggling to deal with the issues that he is having with Princess. He is meeting with his dad Willie for a tuxedo fitting. He tells his dad “We are having so many issues recently and I can’t talk to mom because she would just tell me that these are all signs that we should not get married.” Willie tells him “You have to know that marriage is forever and that you and princess are forever.” Ray says “You’re right. We are going to work through it.”

Lyrica meets with Pam and apologizes to her for the argument that they had a couple days ago. She tells her “I’m sorry for the way I spoke to you. I want us to be able to get along because you are my mother in law and part of my family.” Pam tells her “I don’t blame you. It’s more you’re mother than you.” Lyrica says “My mother has agreed to give me the car back. I want you to ride with me so that my mom can see that we are building a positive relationship.” Pam agrees to go with her and the two women hug.

Hazel E is back in town. She and Teairra meet up to reconnect and find out what is going on in each other’s lives. Hazel tells her “I just put out a new record with Fetty Wap.” Teairra seems shocked to hear this and tells Hazel “You know that Masika just had a baby by him?” Hazel does not seem impressed. She tells Teairra “I know. She came after me on Social media. I think she should be happy being part of Fetty’s harem.”

Nikki and Anthony meet up to talk about Teairra’s legal situation. Nikki says “I want her to be all right.” I saw my brother head down the wrong path and I don’t want to see her doing the same thing.” Anthony agrees with her. Teairra shows up and tells them “I am so upset. I just found out that because of some miscommunication between me and my lawyer there is a bench warrant out for my arrest.” Both of her friends are shocked. She tells them “The lawyer doesn’t think there will be any problems if I go and turn myself in, but I am going to give you guys bail money just in case.”

Princess meets up with her bridesmaids for dress fittings. She pulls Brandi aside to talk to her about the situation with Ray. She tells her friend “Sonja is really against us getting married. She wanted us to have a prenup.” Brandi reminds Princess that Ray tore the first prenup up at the engagement party. Princess says “I am starting to think it is a good idea to have one after all.” Brandi is shocked to hear this. Princess says “I am going to go to a lawyer and have one drawn up in order to protect myself.” Teairra ends up spending six hours in jail as a result of the bench warrant. Both Nikki and Jonathon are there to bail her out. She is happy and says “It is good to have such loyal friends and to know that they have my back.”

Teairra ends up spending six hours in jail as a result of the bench warrant. Both Nikki and Jonathon are there to bail her out. She is happy and says “It is good to have such loyal friends and to know that they have my back.”

Max and Brandi are in the car after the dress fitting. Brandi is really troubled by the bombshell that princess dropped on her about the prenup. She tells Max “I have to tell Ray about ths.” Max asks her “Why? Are you in their marriage? All you have to do is go to the wedding, be a bridesmaid and smile.” Brandi tells him “Ray is my friend and I have some loyalty to him and Sonja.” Max then tells her “I told Fizz about the tape.” Brandi is upset. She asks him “Why would you do that? He is going to go back and tell her.” Max says “I spend time with Cam and I wouldn’t want him to find out that I played a part in embarrassing his mom.” After thinking about it Brandi agrees.

Lyrica and Pam drive up to retrieve Lyrica’s car from her mother and as soon as Lyrica G sees Pam behind the wheel of her car she imeadiately goes for the throat. She snatches open the door and tries to grab Pam out of the drivers seat of the car while screaming at her “What are you doing driving my car?” Lyrica A jumps out and tries to stop her mother from beating Pam up. She tells her “I asked her to ride with me!” Lyrica G is pissed. She tells Pam “You have no right to be driving my car.” Lyrica tells her “You two need to learn to get along because we are all family now hug.” The two women reluctantly hug it out.

Moniece figures out that it was her ex-boyfriend, a rapper named Phillip, who leaked the tape. She goes to the club to confront him. She asks him “How did the tape get leaked?” Phillip tells her “My phone was stolen and Jason Lee contacted me saying that he would get the phone back to me.” Moniece is not buying it. She tells him “I want all copies of the tape sent to my lawyer.” Phillip says “What lawyer?” He just laughs at her. This infuriates Moniece who once again tells him “I want all of the copies of the tape sent to my lawyer.” Phillip tells her “There is only one copy of the tape.” Once again Moniece does not believe him. She yells at him and the argument intensifies only ending when Moniece throws a drink in his face.

Masika decides that she is going to confront Hazel about the war that has suddenly errupted between the two of them on social media. When the two ladies come face to face they are polite at first. Masika then asks her “Are you going to apologize for the comments you made about my daughter?” Hazel says “I never said anything about your daughter. Your daughter is beautiful. You said that it wasn’t Fetty on my song-” Masika interrupts her and says “It isn’t.” Hazel goes on to say “So I simply questioned whether or not you were sure that he was the father of your baby.” This comment sets Masika off. She picks up a glass and throws it at Hazel and the two women have to be seperated by security.