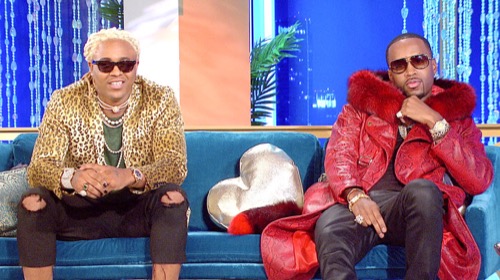 Did you watch last week’s episode where in Part 1 of 2. Nina Parker reunited the cast to discuss Season 3. Later, Fizz and Nikki faced off; Moniece crossed the line when she attacked Brandi’s family? If you missed it and want to catch up, we have a full & detailed Love & Hip Hop Hollywood recap from last week, right here for you!

On tonight’s episode as per the VH1 synopsis, “Conclusion. The reunion continues with Masika and Hazel facing off. Later, Willie and Kyesha’s texts are revealed; Rosa accuses Safaree of being cheap; and Moniece makes a shocking allegation that one of the guys has a child with a mistress.”

On part two of the Love and Hip Hollywood reunion the drama last week continues between Masika and Hazel. Masika refuses to sit on the stage with Hazel. She tells Nina “This girl made untoward comments about my child and she doesn’t deserve to breathe my air.” Nina gets everyone settled back down with Masika sitting in the front row of the audience. Then she asks Masika “Why did you make that comment about Fetty not being the father of Masika’s daughter?” Hazel says “I said that because she made some untoward comments about me and I felt like I had to defend myself.” Masika says “That’s not Fetty on your song and you know it.” The argument continues until Masika gets up and walks away.

Nina moves on to talk about the situation between Safaree, Rosa and Nikki yet again. She tells Safaree “You have caught a lot of drama from fans online for using your accent. What do you have to say to them?” Safaree says “They’re stupid.” Nina then asks Rosa “What do you think about Safaree’s accent?” Rosa says “I can’t turn my accent on and off like he does.” Safaree tells her “Shut up. You’re fake.” Rosa fires back “Come talk to me when you can pay for Nikki’s dinner.” Safaree says “I don’t hear anything from that side of the room. What’s the next question?”

When they return Nina moves on talk to Max and Shanda about the drama that has befallen them this season. She asks Max “Do you wish that you had told Shanda the truth from the beginning?” Max says “Yeah. I should’ve been more honest with my wife about what was going on, but there was no thirteen-year relationship with Kyiesha.” The argument gets out of hand when the other woman comes out. Willie immediately gets heated and asks her “When were we ever in love?” Kyiesha is immediately heated and upset. She says “You know we were in love. We had a thirteen-year relationship off and on. I took care of you when you had nothing.” Shanda says “I don’t believe that there was a long-term relationship. I do believe that they may have been a one-night thing.” Nina asks Willie “Are you guys back together now?” Willie says “No. I want to be, but we are not yet.” Shanda tells them “I need to take a break to heal from all the madness. I will always love him because we have a history and you can’t erase that. We also share children and he is a good father. We are working on our marriage, but if we can’t fix it then I will do what I have to do.” Nina tells them “I am rooting for the two of you.”

When the reunion returns they move on to deal with the situation between Masika and Brandi when she found her in the studio with her husband Max. Nina asks Brandi “Do you feel like you have a right to check up on your husband when he is working in the studio and see who he is working with?” Brandi says “Yes. I think I should know who he is in the studio with.” She then asks Max “Do you think Brandi has a right to dictate who you work with in the studio?” Max says “I would never want to do anything to disrespect my baby and if she doesn’t want me working with someone then I need to take that into consideration.” Nina then asks Ray and A1 if they would ever not work with someone because their wives did not approve. A1 says “Nope. If my wife does not approve then that’s that.” Ray is a little more hesitant, but he agrees.

When the reunion returns they move on to talk about the drama between Pam and Lyrica G and how it drove their children to elope. Nina asks Pam “Did you feel like you overstayed your welcome?” Pam says “It doesn’t matter because my son would never have put me out on the street like that.” Lyrica says “We would never have put her out on the street like that because we are not those type of people.”

Nina moves on to talk about Lyrica and A1’s eloping. She asks A1 “Why did you guys decide to elope?” Lyrica G says “There is no way that I would have ruined this day for her.” Nina asks Lyrica A “How do you feel?” Lyrica says “I think my mom needs to step back and let me be me. I chose him as my husband and I am happy.” Lyrica G says “She didn’t get to be the woman she is without training from me.” A1 tells Lyrica G “You need to step back and let her be a woman now.” Lyrica G speaks up and says “I am a grown woman and if I fall I will be able to pick myself up and move on.”

When the reunion returns they move on to talk about Teairra’s pending case with the Uber driver. Teairra becomes very emotional when she talks about how hearing Nikki compare her to her brother made her feel. She says “When I am drunk I become a raging demon and I know i need to stop that.” Nina asks her ” Are you getting professional help for that?” Teairra says “No, not yet.” Nina asks Ray “You have known her for a long time. Have you ever known her to have this serious of an alcohol problem?” Ray says “No, not really.” Nina then asks Teairra “What’s going on with your case?” Teairra tells her “I am going to trial because I refuse to take a plea since i didn’t do anything wrong.” Nina asks her “Are you afraid of going to jail because you are facing some serious jail time?” Teairra says “I am scared to death.”