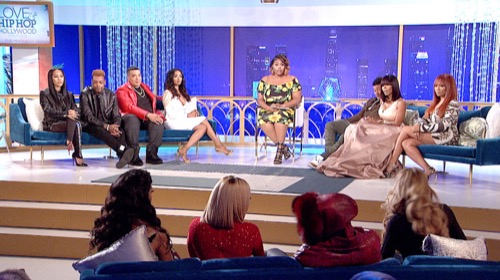 Did you watch last week’s episode where in the third-season finale, Ray and Princess remained at odds, threatening the couple’s upcoming wedding? If you missed it and want to catch up, we have a full & detailed Love & Hip Hop Hollywood recap from last week, right here for you!

On tonight’s episode as per the VH1 synopsis, “Part 1 of 2. Nina Parker reunites the cast to discuss Season 3. Later, Fizz and Nikki face off; Moniece crosses a line when she attacks Brandi’s family; Nikki reveals her romantic partner and Masika threatens to leave after a surprise guest arrives.”

This week on part one of The Love and Hip Hop Hollywood Reunion Nia Parker reunites everyone to deal with the season’s drama. She kicks the show off with congratulations to Ray and Princess. Then she moves on to talk about the relationship between Moniece and Fizz. Nia asks Fizz “Was there ever a part of you that thought there could ever be a rekindling of the relationship?”

Both Moniece and Fizz are quick to deny that they wanted to rekindle the relationship. It is quickly brought to light that Moniece is gay and has a girlfriend. Nia asks Nikki “What made you move on from the situation?” Nikki says “I was going through my own things at the time.” Fizz says “I felt like she wanted a relationship for three episodes and then she wanted another relationship.” The argument quickly became heated and Nia had to move on.

She moves on to deal with Moniece’s issues with Princess and Brandi. Nia asks Moniece “Why does it seem like most of the women come for you?” Moniece says “All of this started last year when they wanted to come for me and they wanted to attack my motherhood. Had they not come for me I would not have come for them.” Nia then asks Nikki “Do you feel like Moneice plays the victim?” Nikki says “i do think she plays the victim. She always tweets negative things about me and then wants to play the victim. She was just in Safaree’s DM talking to him.”

Moniece steps up and says “That was about work.” Nia steps in and asks Safaree “Was Moniece hitting you up on Twitter?” Safaree confirms that she was, but says that it was about work.” Masika speaks up and tries to defend Moniece, but this quickly goes sideways. The argument between the women breaks down and soon all of them are yelling and swearing at each other.

When the reunion returns Nia asks Brandi responds to a comment made about her son. She says “You called my child and my family ugly. You said that I need to save money for braces for my son.” Max speaks up and tells her “Stop worrying about my son.” Nia asks Teairra “Do you think that they are ganging up on her?” Teairra says “Absolutely. Do I think that she should have called her son ugly? No, but we are all grown women and should be able to have conversations with each other.”

Nia moves on to talk about Moniece’s sex tape. Moniece decides to get up and leave. Nia tries to get her to stay. Brandi says “I didn’t want to do that, but I felt like she was just doing too much.” Nia says “Moniece you had to know that after you talked about Brandi’s case they were going to retaliate.” Moniece tries to defend herself. She says “I had individual conversations with each of them. Princess wanted to meet in a park.” Once again the issue breaks down completely and there is alot of screaming and yelling.

When they return they move on to talk about Princess and Ray J’s wedding. Nina asks Princess how the relationship with her dad was going. Princess says “We have been out there to visit.” Nina then asks “How much do you think you put in to planning the wedding?” Princess says “I think I put in ninety percent.” Ray says “I just wanted to wear the chain that Arsenio Hall wore in Coming to America.”

They then move on to talk about the issues that Sonja had with Princess and Ray’s wedding and the prenup. Nina asks Sonja “How do you feel about Princess now?” Sonja says “I think Princess is strong. I’m strong too.” Nina then asks Brandi “You told Ray about the prenup.” Ray interjects and says “It was a bumpy road, but as long as you work through your issues and come out on the other side it’s all good.”Nina then asks Safaree “Were you there?” Safaree says he was and

Nina then asks Safaree “Were you there?” Safaree says he was and thanks Ray and Princess for inviting him. She then asks Nikki “Were you dating Safaree? Were you at the wedding?” Nikki says “No. I wasn’t. I honestly felt some type of way because I thought we were cool.” Princess says “It was a small wedding and Nikki and I hadn’t really talked in two years. ” She tells Nikki “You’d never really responded to the last text I sent you.”

When they return they move on to address the issue between Nikki and Safaree. Safaree says “I can’t control who God attracts me to.” Nina tells him “You also seem to be a serial monogamist.” Nina asks him “Are you suing your ex?” Safaree says “No, it’s not true. My lawyers drafted some stuff and had me look at it and the other side never explained what it was.” Nina then addresses the situation between Nikki and Rosa as it applied to Safaree and Nikki’s relationship. Nina asks Nikki “Why not tell them both the truth off the top?” Nikki says “I didn’t feel I had to tell either one of them anything because I wasn’t in an exclusive relationship with either one of them.” Nina then asks Rosa “Who were you more angry at?” Rosa says “I was more angry at Nikki.” Nina asks Nikki “Was Rosa your first serious relationship with a woman?” Nikki says “No. I used to date Amber Rose. We still hang out.” Nina then asks Nikki and Rosa about the state of their relationship now.

At first the two women seem to shy away from answering the question. Then they engage in a steamy kiss on stage that seems to shock everyone.

When they return they address the situation of Brandi taking the 27,000 that Max had put aside for his son and investing it into her store. Nina asks Max “Were you really that upset?” Max says “I was mad because she gets on me for spending money fast, but when she does it it is fine.” Nina asks Moniece “Would you have taken the money?” Moniece says “I wouldn’t have done it, but she did what she felt she had to do for her family and kudos to her for that. I don’t care if the store succeeds or fails.” Nina then asks Brandi “Have you paid back all the money?” Brandi says “Yes I have, and the store is still open and doing very well.”

When they return the reunion moves on to deal with the issues sorrounding Hazel E, Masika and Masika’s baby daddy Fetty Wop. Nina asks Masika “How often does Fetty see the baby?” Masika says “He sees her alot more often.” Nina says “Hazel made some allegations that Fetty was not your baby daddy.” Masika says “I’m not going to give her anymore air time.” Nina welcomes Hazel to the stage and she comes out guns blazing and ready to fire at Masika.