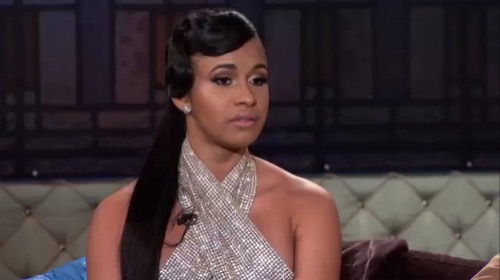 Tonight on VH1 their series Love & Hip Hop continues with an all new Monday March 21, season 6 episode 13 “The Reunion: Part 1” and we have your weekly recap below. On tonight’s episode, Part 1 of 2. Nina Parker reunites the cast to discuss this season’s drama; Rah Ali confronts Yandy Smith.

On the last episode, in the sixth-season finale, Remy Ma’s wedding day had arrived, but obstacles stood in her way. Did you watch the last episode? If you missed it, we have a full and detailed recap right here for you.

This week on part one of the Love and Hip Hop reunion Nina Parker starts off by talking to Remy Ma and Papoose. They show clips of their wedding. Nina asks them about the deal they made and if Papoose was ready to go back to diaper duty. Papoose says “Absolutely, after she has the baby she can give it to me and I will be there 24/7.” Nina then asks about Remy’s relationship with her mother. She tells her “My mother talks to Pap all the time.”

They move on to talk about Remy’s budding friendship with Yandy. Remy backs up off of the question and Yandy steps up and says “I never knew that there was an issue that could have made me a patsy in my relationship with Remy.” Rah interrupts and says “You knew that Remy and I were having issues and that she was merely a fill in. ” Rah interrupts her and tells Yandy “The only reason Remy was dealing with you was because of her issues with me.” Yandy tells Nina “Rah has a serious case of what she calls CT.” She then goes on to explain that it stands for Can’t take Me. Rah tells her “I am not jealous of you.” Yandy fires back at her saying “I can sit here all night and look pretty and Rah can’t take it.” Rah yells at Yandy telling her “You don’t look pretty. Who told you that?”

When they return Nina introduces Mariah Lynn.bShe goes back to Mariah’s issue with Moe and the confrontation about the restraining order she filed against Bianca. Mariah comes back to the fact that she had stolen Cisco from Moe and Cisco tells them “That’s why I don’t mess with either one of you anymore.” Nina moves on to the issue that developed between Lexxy, Moe and Rasheeda. Nina asks Yandy why the relationship between BBOD and Rah failed.

Yandy tells her “Rah didn’t have the connections to get her clients what they needed. Nina asks Moe why she thought there was a problem between her and Rasheeda. Moe says that “Prior to coming on the show we didn’t have any issues with each other. Lexxy,Rah and I had even gone to the club.” Rah interrupts and tells Moe she need to “Mind her own business.” Moe asks Rasheeda how she could tell her artists “Not to fight and then go to an event and engage in the same behavior.” Rasheeda responds by saying “Everyone knows I fight.”

When they return Nina introduces Mariah Lynn.She goes back to Mariah’s issue with Moe and the confrontation about the restraining order she filed against Bianca. Mariah comes back to the fact that she had stolen Cisco from Mariah Lynn, Cisco and Moe are up next. They show the video package about the love triangle that developed between the three. Nina asks Moe how long they had been dating. Moe says that they had only been dating for a couple months and that it was nothing serious. Nina asks Cisco if he had been clear with Moe about their situation. Cisco says “I thought I was clear about the situation.” Cardi jumps in to insult Lexxy when she asks why Cardi is insulting them. Cardi, Lexxy and Moe start yelling, screaming and swearing at each other. Then Mariah makes the comment “You were the one who said I weigh about five pounds and you could walk past me and blow me away. Well blow then.” This comment brings Lexxy out of her chair and the fight looks like it is about to happen. Both Moe and Lexxy leave the stage for a bit after security separates them.

Next up Nina talks to Cisco, Mariah and Rich Dollarz. Nina asks Rich about his relationship with Mariah Lynn. He tells her that they had messed around a few years ago. Mariah drops the bombshell that she was pregnant by Rich at one point. Nina moves on and asks Mariah about her relationship with Cisco. She says “We connected through the fact that we share things in common.”

Nina moves on to talk to Rich about his relationship with his daughter Ashely. She asks him if he thought he was too lax with her. Rich said “No, we have a friendship and she tells me things that she wouldn’t tell anyone else.” Nina then asks if he was shocked by Ashley’s response to his question about her being a virgin. Rich responds “No. I had asked her this many times before and she told me no, so she lied to me up until we were on TV.” Nina then asks the other guys if they were worried about their creep karma catching up with them. Peter says “It already has,” He then goes on to explain that there was a situation in which his daughter got her heart broken and he didn’t feel as though he had the right to go back and confront the guy because of his behavior in the past.

Next up Nina talks to peter, Amina and Tara. Nina Tara how she and Peter ended up in bed together. Tara says that “I just wanted to be over it.” Amina and Tara start arguing and Tara says that Peter and Amina’s anniversary is February 15th. She calls it National Sidechick Day. Nina asks Whitney, Peter’s daughter, how she felt about the discussion. Whitney says she is “Disgusted by the whole situation.” Nina then asks Rich where this situation puts Peter in the creep squad ranking. Rich says “Let’s get it straight. There is no malice in this man’s heart. Nina then asks him if he blamed Amina and Tara. Rich says “No, I blama all of them.” When Nina asks him why he had never married Tara in all the years they had been together he says “I’m just not the marrying kind.” This draws gasps of shock from the audience.

They move on to talk about Tara’s pregnancy. They show the clips of Tara revealing the news to Peter and then Peter revealing the news to Amina. Nina asks Tara how she could go 18 weeks without knowing she was pregnant. Tara says “I had taken a plan B and thought it would work.” Peter says “I am glad it didn’t work. I am going to kiss his little feet in two weeks.” Nina then asks Amina how it feels to know rhat Tara will be the last one to have Peter’s baby. Amina says “Tara won’t be the last one to have his baby because I’m pregnant.” She then stands up to reveal her baby bump. The audience is shocked.