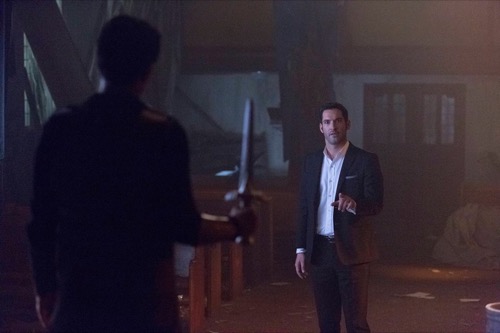 Tonight on FOX their drama Lucifer airs with an all new Monday, October 24, season 2 episode 5 called, “Lady Parts,” and we have your weekly Lucifer recap below. On tonight’s Lucifer episode Lucifer (Tom Ellis) and Uriel battle over Chloe (Lauren German) and their mother.

Did you watch the last Lucifer episode after the bodies of two young L.A. transplants were found poisoned, Chloe and Lucifer hunted for the killer ?  If you missed it we have a full and detailed Lucifer recap, right here!

On the last Lucifer episode as per the FOX synopsis, “Lucifer is excited to investigate the murder of his favorite action movie hero, Wesley Cabot. Longtime rival Rolf Van Zandt initially is a suspect, but the investigation soon shifts. Meanwhile, Uriel (guest star Michael Imperioli) shows up and Amenadiel is forced to come clean about his lost powers.”

Amenadiel had warned Lucifer about what God would do now that they both had ended up breaking their father’s rules though neither of them had realized that God would send their brother of all people to deal with them. Uriel was the brother that couldn’t be reasoned with and he was also one of their father’s most faithful servants.

So Uriel had decided to send his dear brother Lucifer a warning. The archangel had caused Chloe to have a car accident and afterward Uriel had told Lucifer that he had twenty-four hours to deliver their mother or next time Chloe was going to get far more than a little scratch.

So Uriel wasn’t messing around. He would hurt Chloe and he showed qualms about doing so as long as he got what he wanted in the end. Which was their mother. Their mother had been sentenced to Hell and God didn’t want her to be free from that demonic prison. But Lucifer had made a promise to his mother.

He had told her that he wouldn’t take her back to hell and so these latest threats from Uriel were testing that resolve yet Lucifer believed that his brother Amenadiel could help him out. Lucifer hadn’t known the extent in which Amenadiel fell off the wagon so he didn’t know that his brother was losing his powers by the day. And so Lucifer still thought that Amenadiel was a threat.

Lucifer believed that Amenadiel could reason with Uriel if no one else could. So he had asked his Amenadiel to deal with their brother and that way he didn’t have to choose between their mother or Chloe however, pretending everything was fine didn’t help either of them. Amenadiel didn’t know how to deal with Uriel and Lucifer simply went on with his day by working another case with Chloe.

Yet, the case with Chloe had also been personal for Lucifer. His favorite action hero, Wesley Cabot, had been murdered and therefore Lucifer kept repeating some of Wesley most famous lines from his movies as he tried to play the hero.

However, Lucifer’s concern for Chloe did occasionally sneak in when he was repeating cheesy lines. Lucifer would be joking one moment and in the next he’d be telling Chloe to be careful. So that did eventually annoy her. Chloe had believed her car accident was just an accident so she didn’t see why Lucifer was making such a fuss and more importantly she didn’t want that to worry her daughter.

Trixie was finally beginning to see her mother’s job as a dangerous and she didn’t need any more convincing from Lucifer though he did try to keep the little from finding things. Like how Maze left her sex toys basically lying around. And so that was another thing Lucifer hated.

Lucifer didn’t think it was a good idea that Maze and Chloe were moving in together. He thought the two didn’t mesh well and he barely understood their newfound friendship. So he thought it was a bad idea, but understanding Maze and Chloe’s weird relationship did help him understand that their victim couldn’t have been killed by alleged arch rival.

Wesley and Kimo had instead been friends and they had also shared everything. They had the same manager, studio, and they had even gotten over the fact that they ended up sharing the same wife. With Jamie having been married to Wesley first before she left him from Kimo. Though there was one thing that didn’t make sense.

Kimo claims to be Wesley’s best friend yet his finger prints were found on the murder weapon. So Dan who usually helped out in the background had found something that he thought made the pieces fit. Dan had found out that Kimo and Welsey’s business manager had been stealing money from them for years and it appears that he had gone to his ex-wife Jamie for help because he knew that she understood business a lot better than he could.

But Chloe had said that she was going to find the manager to hear his side of things and Lucifer had said that he wasn’t going to go with her. And then he had tapped out.

Lucifer had wanted to check on Amenadiel to see if the Uriel problem was over however Uriel had badly beaten the living daylights out of Amenadiel and so Lucifer had demanded an explanation. Yet, even he had been shocked to hear how bad things had gotten for Amenadiel. Amenadiel had been God’s firstborn and surprisingly God had managed to turn his back on Amenadiel as well.

So both Lucifer and Amenadiel had been a little bitter about that. While Amenadiel had broken most of God’s rules like fornicating with a demon, setting a soul free from hell, and allowing his mother to stay on earth – God’s punishment against him had simply unfathomable.

Neither Lucifer nor Amendaiel could understand why God would forgive humans any day of the week and be so harsh with them. However, once Lucifer had seen how bad things were for Amenadiel, he had gone running to Chloe’s side though he didn’t need to worry because Chloe ended up taking care of herself.

Chloe had figured out that Wesley’s manager and Jamie were now together so she realized that Jamie had told Ryan about Wesley’s concerns. So the only thing that Chloe had been concerned with was Kimo’s reaction. Kimo had also found out that Jamie was cheating him and so it was easy putting two and two together.

Kimo had also realized that the couple killed his friend and was going to frame him for Wesley’s murder. So Chloe had a tricky time at first trying to dissuade Kimo from shooting his cheating wife and business manager. Though eventually she convinced Kimo to put the gun down and so all Lucifer had to do to make sure that there wouldn’t be another close encounter like the one with Kimo was to go up against Uriel.

Their mother had been willing to turn herself in and go back to hell, but that’s not what Uriel was planning on doing. Uriel’s plan all along was to kill their mother. He apparently had a knife that could take such creatures as angels and goddesses out of existence.

So it turned out to be a pretty good thing that Lucifer never allowed his mother to turn herself in and had instead chosen to fight Uriel. He had showed up at the meeting place and he had gone up against that he had still thought was the runt of the litter.

But Uriel had changed since then and he would have defeated Lucifer despite Maze being his back up if Lucifer hadn’t used the special knife on Uriel. And killed his own brother.