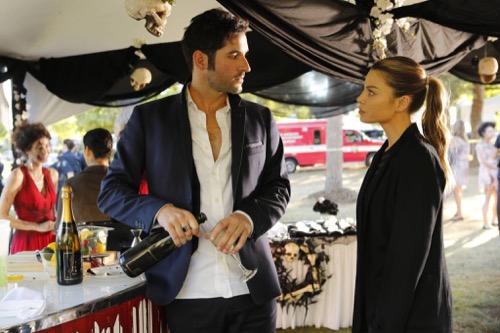 Tonight on FOX their drama Lucifer airs with an all new Monday, November 6, season 2 episode 7 called, “My Little Monkey,” and we have your weekly Lucifer recap below. On tonight’s Lucifer episode Maze (Lesley-Ann Brandt) goes job-hunting and Lucifer (Tom Ellis) follows Dan (Kevin Alejandro) around in an effort to learn how to act “normal.”

Did you watch the last Lucifer episode where guilty and self-destructive, Lucifer (Tom Ellis) clashed with Chloe during an investigation, leading her to team up with Dan instead?  If you missed it we have a full and detailed Lucifer recap, right here!

On the last Lucifer episode as per the FOX synopsis, “When the prisoner convicted of killing Chloe’s father is murdered, new evidence suggests he was actually framed. Meanwhile, Maze tries to find a job and Lucifer shadows Dan in order to learn how to be “normal.”

Dr. Linda had apparently dumped Lucifer as a patient. She had called him out of the blue to cancel their next appointment and Lucifer quickly got the hint when Linda proved to be reluctant about rescheduling. So that had actually been pretty hard for Lucifer to deal with. He usually doesn’t open up to people however he chose to take the risk with Linda and she had come to reject him in the end. But Lucifer didn’t blame Linda for what she did, he blamed Chloe! Chloe had been the one to tell him to be honest with his therapist and he felt it was her fault that he now had no one.

However, Chloe wasn’t interested in getting into a fight with Lucifer. Chloe had recently found out that her father’s killer had challenged the parole board to get released and so her focus was entirely on keeping that man in prison. So Chloe did everything possible. She talked to lawyers, she talked to the warden, and she had also tried petitioning the board though she didn’t have a lot to back her up. Chloe’s defense was that the man was still a danger to society and his record showed the exact opposite because he had changed in prison.

The man that Chloe has been saying was dangerous had been a model citizen in prison and Chloe’s gut instinct had seemed skewed. She would of course never want the man that killed her father released and so her word on the matter was eventually ignored. Though Chloe still refused to believe that Joe Fields had changed and therefore she ended up following him. He was getting transferred out of the prison and so Chloe followed his transport vehicle yet following him later proved to be a mistake on her part.

Chloe had unfortunately been in the wrong place at the right time and so she was the one that found the killer’s transport vehicle attacked with everyone inside dead. So Chloe looked like a great suspect. She had been following Joe, she had tried to fight his release, and she had made her feelings/hatred known to everyone. Yet, Chloe didn’t do it and the people that cared her about her knew it. Dan, Lucifer, and even the new girl Ella had felt that Chloe never would have killed someone in cold blood. And so they wanted to prove it.

Chloe technically couldn’t take on the case because it was conflict of interest so Dan decided to handle it and Lucifer sort of tagged along. Lucifer had said that he wanted to change and what he really meant was that he wanted to model himself after Dan. Dan was liked by mostly everyone and people truly felt safe around him. So Lucifer had wanted to be like Dan because his last appointment with Dr. Linda had truly hurt him. But following Dan around and trying to impersonate him had later ticked off Dan.

Dan felt that Lucifer was playing a game and he didn’t have time for it. However, Lucifer proved to be helpful after Dan found a pretty good suspect. Dan had found out that Joe had had problems with a man in prison and so he had brought Rodney Lamb in for questioning, but Lucifer and his special trick had gotten more out of Rodney than Dan ever could. So Dan and Lucifer found out that Rodney had been paid to confess to Joe’s murder. And what was surprising was that he wasn’t the only one that had accepted money in exchange for being the fall guy.

Joe as it turns out had also been paid to confess to the murder of Chloe’s father’s. Joe had apparently had a recording that proved he was across town during John Decker’s murder and he had left for his daughter if he had ever been killed. So Chloe had found out about that video after Joe’s daughter had confronted her. Tina had sadly thought that Chloe killed her father out of revenge so she had brought a gun to Chloe’s house and had been fully prepared to kill her. Yet, Chloe was able to disarm her and she didn’t bother to report Tina because Tina had showed her the video.

Though that video changed everything for Chloe. Chloe had said that she couldn’t work Joe’s case however she was perfectly willing to break the rules when it came to her father and so she had secretly investigated her father’s murder with Ella’s help. Ella had looked through all of John’s records to see if he had made any enemies and she couldn’t find anything that stood out. John had simply been a beat cop and it wasn’t as if he was working the serious cases. And so most of his official files hadn’t been much.

John’s personal files on the other hand had been different. Chloe had looked through what her father kept and she found out that he was investigating several cases even though he had once said that he had never wanted to be a detective. So Maze had said something nice when she found out about John. She had said his detective skills must have run in the blood and for a while that had helped Chloe to feel better But Maze had had a question for Chloe. She had wanted to know when did Chloe realize she wanted to be a cop because she was personally confused.

Maze had wanted to distance herself from Lucifer and so she had wanted a job that she found for herself. However, Linda didn’t want to see her because she knew she was demon and Maze had felt like she lost her best friend. So Chloe had kind of a stood in as Maze’s fall back. Maze had needed advice and Chloe was supposed to off it yet Chloe didn’t know how to respond to Maze’s question. Chloe had said that it just felt right becoming a cop and later Lucifer had helped her see who her father’s killer was.

The killer had been the Deputy Warden at Joe and Rodney’s prison. So that’s how he was able to stay close to both men and when he knew that Joe was getting transferred. Though when Chloe and Lucifer figured out who he was – he had a made a run for it and it had been up to Maze to help save the day. Maze had hunted down the Deputy Warden and she had said that it just felt right. And so John Decker’s murder will probably get sent to the same prison he used to work at and Chloe thought that was perfectly fitting.

Chloe had wanted to hurt him and him being sentenced was enough for her. Yet, hunting the Deputy Warden had showed Maze that she wanted to be was a bounty hunter. So Maze got her first check when she turned that guy in and she had showed that check off to Linda. Maze had said that she wanted to celebrate with her friend and so that convinced Linda that maybe it wouldn’t be so bad to go for drink with Maze even if she was a demon. And Linda was on her way to appreciating her friends as they were instead of how she wanted them to be.

And Dan had been able to lean on Lucifer when he showed how good of a person he could be.