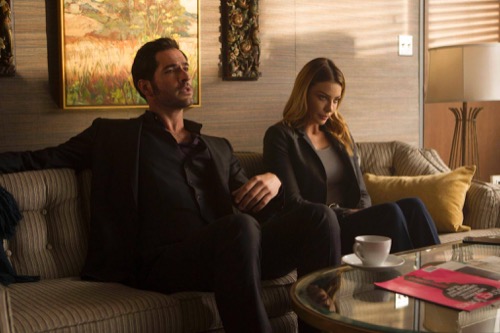 Tonight on FOX Lucifer airs with an all new Monday February 1 season 1 episode 2 called, “Lucifer, Stay. Good Devil,” and we have your weekly recap below. On tonight’s episode Chloe (Lauren German) gets help from Lucifer (Tom Ellis) on the investigation into the death of a movie star’s son who was killed while dodging paparazzi.

On the last episode, upon leaving hell, Lucifer Morningstar retreated to Los Angeles for a more exciting life. When the murder of a friend connected him with LAPD detective Chloe Decker, Lucifer became intrigued with the idea of punishing criminals, sending the devil himself into a struggle between good and evil. Did you watch the last season’s finale? If you missed it, we have a full and detailed recap right here for you.

On tonight’s episode as per the FOX synopsis, “Chloe gets help from Lucifer on the investigation into the death of a movie star’s son who was killed while dodging paparazzi. Meanwhile, Maze and Amenadiel continue to urge Lucifer to return to hell.”

The devil apparently has an unshakable moral code. It seems that he’s fine with people generally sinning but actually takes offence with people he considers to be charlatans. So that might explain why he attacked a man on the street who was merely pretending to preach the word of the lord when really was milking people of their money.

Therefore, there’s still some good in him though it does look like its buried pretty far down. And not even his recent time spent on his therapist’s couch has managed to change that.

But Detective Chloe does appear to have better access to this good side than anyone else. She had been put on medical leave following her near death experience and so she had chosen to use such precious time to stalk Lucifer. As in she’s been following him around and has also created a dossier on him.

Although, who could blame her? Chloe had after all seen him get shot and somehow walk away from it all as if those bullets had been mosquitoes. So naturally she still has a few questions about that and few other things.

However, a real case just managed to pull her away. A movie star’s son had died and it looks to be as if the paparazzo that had been chasing him was at fault because the very same paparazzo had also confessed to being at fault. Yet Chloe didn’t think that the crime scene all added up and funnily enough she had more reason than anyone else to hate the guy they had already arrested.

Nick had made a living off of other people’s pain and he had done so to Chloe once. It seems crashed her father’s funeral when her career as an actress was at an all-time high and so not only did Chloe hate him more than anybody else but she also quit acting afterwards. Just so she could get justice for other people.

Only her theory about there being more to Nick’s story needed a certain person to prod Nick for details. So Chloe used Lucifer’s sometimes annoying timing to her advantage and she had him question Nick. And Nick sang told them a very different tale about what happened.

He admitted to protecting someone and would have told them if Chloe’s ex hadn’t stopped their unsanctioned interrogation. And so Chloe had tried to go about doing things the right way. She later warned her ex about Nick’s story but what she hadn’t counted on was Lucifer. Lucifer ended up going behind her back and speaking with Nick on his own.

So Lucifer found out that Nick had been covering up for his protégé. Which turned out to be a young man named Josh. Josh had been a runaway teenager when Nick found him and so Nick had helped the kid get a leg up in the business.

However, there was something off about Josh and both Chloe and Lucifer saw that for themselves. Josh it seems had a knack timing. As in it didn’t matter who was involved or what the situation was – Josh somehow managed to always be there with his camera ready. And so Chloe wondered if Josh might be staging scenes in order to be the first to capture it.

A theory that Lucifer had also believed in. But while Chloe looked for concrete evidence, Lucifer decided to start punishing people right then and there. So he got Nick out of his holding cell and then kidnapped Josh.

Lucifer’s plan, you see, was to get Nick and Josh to punish each other by putting a gun between them. And then telling them why it would be such a good idea to shoot each other right then. Like the fact Josh set Nick to take the fall for an accident he knowingly caused and how Nick was prepared to testify against Josh to clear his own name. But thankfully a few people showed up.

Chloe arrived on the scene ready to stop it but it didn’t look like she could. So Lucifer was forced to call for his brother Amenadiel because he knew the archangel would slow down time with his arrival and that he would be provided with just enough time to stop the men from killing each other. Which Lucifer also wanted his brother to see.

So although neither his brother or nor his demon side-kick approved of this change, Lucifer wasn’t going to go back to hell. And it looks like he’s going to keep hanging around Chloe.

Chloe on the other hand is finally starting to question whether Lucifer was actually telling the truth when he was said he was the devil.

She has seen things and it’s getting kind of hard to keep making excuses for it.

So all that’s left is to believe he really is the devil.