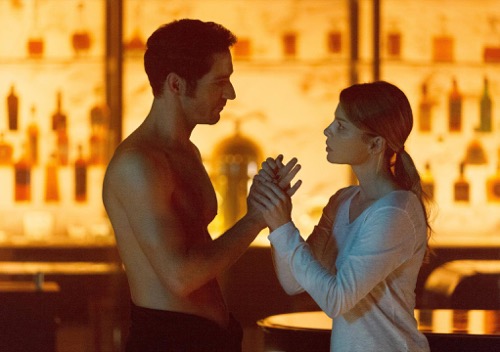 Tonight on FOX Lucifer airs with an all new Monday February 15 season 1 episode 4 called, “Manly Whatnots,” and we have your weekly recap below. On tonight’s episode Lucifer (Ellis) deduces that he must seduce Chloe (Lauren German) if he is to get over his infatuation with her. Meanwhile, they take on a missing-girl case and Amenadiel expresses his concerns about Lucifer to Maze.

On the last episode, when a 22-year-old future superstar quarterback woke up to find a dead girl floating in his swimming pool, he turns to his friend, Lucifer, for help. Lucifer enlisted Chloe to investigate the case, which lead to the world of big money sports and people who literally killed to be number one. Did you watch the last episode? If you missed it, we have a full and detailed recap right here for you.

On tonight’s episode as per the FOX synopsis, “in an effort to get over his infatuation with Chloe, Lucifer decides that he must seduce her. Meanwhile the two team up on a missing girl case and Amenadiel confronts Maze about his concerns about Lucifer.”

Lucifer was acting out of character, even for him. Apparently he let himself in at Detective Chloe’s place while she had been in the shower and he hadn’t exactly been quiet while he had been breaking in. He had created some much noise that eventually it filtered through Chloe’s shower and the cop in her drew a gun on Lucifer before he could blink.

But Chloe hadn’t shot him. She had been upset to find out it had been roaming around her house and yet her chief concern had been why he had broken in. Chloe had wanted to know Lucifer why had come to her place so early in the morning because only a crisis would have driven him to do so.

Therefore, she had asked him about it and Lucifer had told her about what he believed was a crisis which ended up being something just silly!

Lucifer it seems has desperately wanted to work with Chloe on another case and had in fact gotten bored with waiting around by the phone for her call to him. Hence the break as well as some mild flirtation. Though Chloe had to tell him that their business “relationship” didn’t start and end with her entertaining him.

She has already been having some doubts on calling Lucifer on further cases and what he really was but the break-in was probably her last straw on tonight’s all new episode of “Lucifer”. Although, it turns out, she did later need his help with a case about a missing girl. Lindsay Jolson had come to LA on vacation with her brother when she attended an event and was last seen with the host. So the only way to get into another one of those events that explicitly catered to young men needed help with women was for her to show up with the only club owner she knew.

But, once again, Lucifer hadn’t made their working relationship easy. He had had another session with his Dr. Linda because he had wanted to discuss his weird fascination with Chloe and while Linda was giving him a perfect explanation about him wanting what he couldn’t have – he chose to believe that he could get over Chloe if he slept with her. And so he had then made things instantly awkward between them.

He asked her all the time to sleep with him and, though they were supposed to be incognito, he blew their cover to ask the host how he could get Chloe the detective to sleep with him. So, all in all, she had been left pretty angry with him and he ultimately had to bend over backwards to make it up to her.

He agreed to host another event for “the losers” at his club!

These events were usually attended by the same crowd so not only would it allow Chloe to ask if anyone had seen Lindsay, but it also helped her keep an eye on Carver Cruz. Carver had made a lot of money in recent years catering to the desperate and telling them that he could suddenly change their luck in finding love. Yet Carver had been quick earlier to throw out Chloe when he found out she had been a cop.

So Chloe had initially believed that Carver must have done something to Lindsay though she was going to be subtle about it. And subtle was just something Lucifer wasn’t good at.

He had confronted Carver once the other man had made it to his club and he had used his “ways” to ensure that Carver was only telling them the truth. Therefore, Carver hadn’t been messing around when he told them that Lindsay had been kidnapped. It seems they had been a relationship for the last four months and it had looked like it was going somewhere. Like possibly down aisle.

But the kidnappers had decided to play on Carver’s emotions by taking his lady love away and demanding thousands of dollars in return. So Carver hadn’t been the guy that Chloe thought he was and he actually needed her help in getting Lindsay back. He apparently didn’t have the money that the kidnappers were demoing.

So that’s when Lucifer decided to take some of the advice that Carver tells the guys at his seminars and he attempted to be a hero. He called the kidnappers weren’t the others weren’t looking and he offered them the money they wanted in exchange for Lindsay. And so Lucifer had then thought he was going to fix everything yet he had been in for a big surprise.

Because Lindsay hadn’t been kidnapped. She and her brother had faked her kidnapping in order to get as much off of Carver as they could.

Apparently Carver had slept with Lindsay two years in which he had taken her virginity but then wrote about it for one of his advice books. So she wanted revenge and her brother helped her planned everything. However, the siblings had planned on killing Carver once they had gotten the money so they were just going to kill Lucifer as well.

And, there is no killing Lucifer!

Bullets had bounced off him and Chloe had seen what his other “face” looked like right before he was going to punish Chloe. So that’s when she began to believe that maybe he was the devil and he told her to test it out by shooting him. Which she did, but later regret after she saw that Lucifer was actually bleeding from his wound.

So she ended up dismissing everything she had seen prior to that and went back to believing he was a nut. Meanwhile Lucifer appeared to be both shocked and excited about his new mortality. Even though he now can die like everyone else.