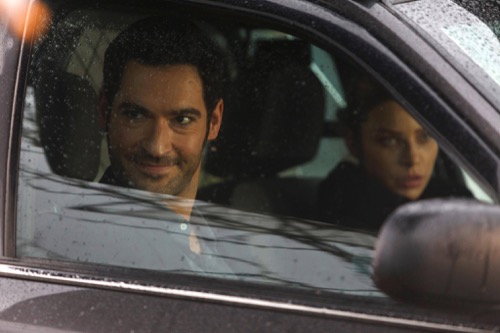 Tonight on FOX Lucifer airs with an all new Monday February 8 season 1 episode 3 called, “The Would-Be Prince of Darkness,” and we have your weekly recap below. On tonight’s episode Lucifer (Tom Ellis) enlists Chloe (Lauren German) to investigate after his friend, a 22-year-old star quarterback, awakes to find a dead woman floating in his swimming pool.

On the last episode, Chloe got help from Lucifer on the investigation into the death of a movie star’s son who was killed while dodging paparazzi. Meanwhile, Maze and Amenadiel continued to urge Lucifer to return to hell. Did you watch the last season’s finale? If you missed it, we have a full and detailed recap right here for you.

On tonight’s episode as per the FOX synopsis, “when a 22-year-old future superstar quarterback wakes up to find a dead girl floating in his swimming pool, he turns to his friend, Lucifer, for help. Lucifer enlists Chloe to investigate the case, which leads to the world of big money sports and people who will literally kill to be number one.”

Lucifer always seems to find himself in the thick of things and tonight was no different. Lucifer had wounded up at a house party on tonight’s all new episode of “Lucifer” and he was actually enjoying himself with a trio of beautiful women when suddenly the host/homeowner decided to mess with his morning afterglow. And had told him about the dead body in the pool.

Now the man that had alerted Lucifer to the situation, Ty, had been an upstanding man before meeting Lucifer but somehow Lucifer convinced him to start trying new things. Like drinking and hooking up with some beautiful women of his own. So that’s exactly what Ty but he claimed to have no knowledge of any of it by the next morning.

Ty had in fact later sworn in front of the police that he couldn’t remember the girl that had been found in his pool. He said he had invited over two hundred people to the party and that most of the time just anyone can show up. And so to the best of his knowledge, Ty could only guess at Ali being the victim’s name.

So Chloe and the LAPD forensic team had a lot on their hands. First they had to find who their victim was and then they had to find out who killed her because she had been murdered. There had been evidence of strangulation and it did look like the victim had fought her attacker.

And therefore Chloe conducted an entire search of Ty’s home in order to find the victim’s missing handbag. Though, once she did it lead to a few other revelations. Like why for instance was the bag found in Ty’s bedroom.

Ty had been a legendary virgin but Chloe just kept finding evidence that his moniker no longer held weight. After she found the bag, she found the car keys which helped to finally identify their victim. The victim’s name had been Ali Thornton but Ali had a video of herself with Ty on her phone.

It seems that Ali had been recording herself and Ty in the middle of you know what. Although she had done so without his knowledge. So the video showed the moment Ty because aware of what she was doing and it had also showed how angry he got with her.

But that’s it. There was nothing else in the video yet somehow it had been enough for Chloe to arrest Ty for Ali’s murder. And oddly the only person that didn’t think he did it was the devil himself.

Lucifer had said that Ty was literally incapable of hurting a fly. Though Lucifer’ therapist had later applied that he might be feeling guilty about the whole situation. You know him being the one to get Ty to tell him his deepest darkest secret and then advising Ty that maybe he should finally start living some of these fantasies out.

And Chloe ended up catching up with him later on. In fact, she had found him still in the building when she went to go question Ty’s management. It seems the phone number for the building had showed up on Ali’s phone and both of them wanted to ask why.

So Lucifer used his mind trick that Chloe loves so much and it got Ty’s agent to admit that he had hired Ali to sleep with Ty. He said he had no problem with Ty’s image as a virgin but that the young man needed some help in getting over his ex. His ex, a Debra McCall, proved to be a superfan and it looks like she needed a restraining order to stay away.

Debra gad apparently once punched a girl for offering to buy Ty drinks and she had been threatening anyone she felt could take him away from her. So that included his agent who admitted to the police that Debra had once stormed into his office claiming that she was representing Ty. But Debra didn’t come across as a stalker when Chloe and Lucifer got the chance to meet her.

If anything, she was intense but definitely credible. Debra had even admitted that she had broken the restraining order and had been outside of the house party. Yet that was it. She had gone home and had also been with a friend at the time of murder.

But someone else must have thought she was guilty because they had bombed her car. So Lucifer helped arrange a sting with the police and it helped him find the man that’s been impersonating him as well as Ali’s madam.

And weirdly Ronnie had a story of her own to tell. She admitted to bombing Debra’s car but that’s because she was told it had been Debra to kill one of her girls. And the man that told her had been Ty’s agent.

The same man that had hired Ali to drug and then film blackmailing images of Ty breaking his no sex rule. So in the end Chloe had figured out what happened and just needed for the agent to admit to it in front of witnesses. Hence she showed up at his office right when he was in a meeting with Ty about rebranding his image.

As it turns out the agent had taken Debra as an honest threat and he knew that Ty would go back to his crazy girlfriend eventually. So in order to save his own job as Ty’s agent, he set Ty up. He had been planning to get leverage on Ty with the video of him sleeping with someone but then Ali grew a conscience.

And she said she wasn’t going to hand over the footage. So Joe killed her and he was going to be known as the guy that saved Ty’s career from the scandal of a murder trial. But all it took was for Chloe to threaten Ty with a very public arrest to get the whole story from Joe.

And after Lucifer had shoved him through a window, Joe wasn’t in any condition to put up a fight.