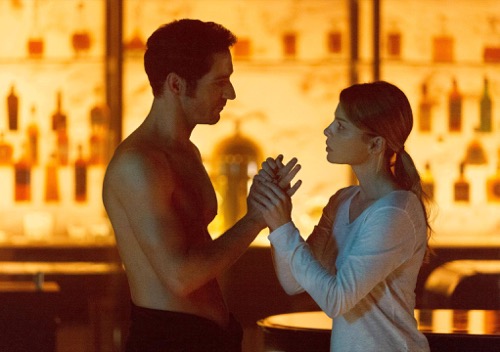 Tonight on FOX Lucifer airs with an all new Monday February 22 season 1 episode 5 called, “Sweet Kicks,” and we have your weekly recap below. On tonight’s episode a shooting at a fashion show intrigues Lucipher (Ellis) and he begs Chloe (Lauren German) to get in on the case.

On the last episode, in an effort to get over his infatuation with Chloe, Lucifer decided that he had to seduce her. Meanwhile the two team up on a missing girl case and Amenadiel confronted Maze about his concerns about Lucifer. Did you watch the last season’s finale? If you missed it, we have a full and detailed recap right here for you.

On tonight’s episode as per the FOX synopsis, “after a shooting occurs at a fashion show and a young woman is killed, Lucifer becomes intrigued by the danger of the situation and begs Chloe to get in on the case. Meanwhile, when Maze admits to Amenadiel that she wants to go back to hell, he sets his sights on Dr. Linda.”

And it seems that Maze has finally had enough of Lucifer’s vacation on earth. In the last few weeks, Maze has been bullying and sometimes just down right threatening towards her quasi friend and master but her goal has always been the same. She wants to return to hell and she wants to do it with Lucifer at her side. Yet, when Lucifer appeared to be unwilling to listen, Maze decided to turn to his brother for help.

Though to be fair, Lucifer had pushed her into taking drastic measures because now Lucifer is actually liking the taste of danger. Which is why he wanted to stick around at a fashion show in spite of gunshots. And why he later pushed his way into yet another one of Chloe’s cases.

The good detective was investigating the death of a young woman who unfortunately trampled to death at the same fashion show Lucifer and Maze attended. So that’s how Lucifer had heard about, but he hadn’t gone directly to Chloe for this one because he knew that she would say no. And therefore he had gone to her boss and, you know, may have implied that his impressive skills could help prevent a gang war.

However, Lucifer was kind of lying about the whole prevention thing. He didn’t want to stop the gang war, he wanted to test his immortality against it. As just another one of his strange games while he was on earth.

So Chloe was stuck with him whether she liked it or not and she had to constantly watch Lucifer because his motives with the case hadn’t been the only thing he lied about. Apparently he knew the guy that had been shot and had failed to mention that he had given Benny Choi his leg up in the world. And while Chloe was quickly learning that was such a thing called a “deal with the devil”, Maze was busy with an archangel.

Amenadiel had paid one of infamous visits and Maze ended up surprising him when she told him she needed his help. It looks like Maze had grown desperate because she told Amenadiel where he could find the one person that Lucifer still talked to. Which unfortunately was his therapist.

And so Dr. Linda got a surprise of a lifetime when Amenadiel then visited her next. For she hadn’t known the office next to hers had gotten rented out and she had honestly found the man pretending to be Dr. Martin quite attractive. And Amenadiel did seem like he was playing on her emotions.

So it won’t be long before Linda betrays Lucifer just like Maze.

Although, Lucifer did eventually confront Maze about her recently acquired hostile attitude. He told her that her job was to protect him but not judge him. And Lucifer followed up his harsh words by accusing Maze of simply being jealous of Chloe.

And therefore Maze had even more of a reason to be mad. Yet things were thankfully progressing with the case. Chloe and Lucifer had found a suspect. Who might have held a grudge against Benny Choi because of something Lucifer did.

Remember that favor that Benny asked for. Well, it seems that back in the day, Benny and his friend Yellow Viper had broken into someone’s house and only Yellow Viper had gotten brought up on charges. So Lucifer had helped get Benny off and Viper had never forgotten that.

But, right when they were going to question Viper, the rival gang showed up ready to kill Viper for what he allegedly did to a cousin of theirs – the girl that had been trampled to death – so both Chloe and Lucifer soon found themselves in the middle of the very same gang war they were tasked with preventing. And it had been left to Maze to save them.

Maze had turned off all the lights in the building and then she had completed decimated the Latin King members that had showed up to kill Yellow Viper.

Yet something hadn’t felt right with either Lucifer or Chloe. They like everyone else had believed that it had been Yellow Viper to cause the mass panic at Benny’s show, but then Chloe had remembered Benny’s security detail. And she knew what really happened.

Benny had become a successful artist thanks to Lucifer yet he hadn’t been the real talent. His best friend Viper was the true artist and Benny simply panicked when he heard that Viper was getting released. So he faked a shooting and was going to pin the death of a young girl on Viper just to keep the other man locked up.

But Chloe and Lucifer convinced his friend and partner in crime to turn him in. So Chloe got to close her case and her boss is looking like the new deputy police commissioner in front of the cameras. Which was what she wanted when she allowed Lucifer to partner with Chloe

Only there was something else that Chloe needed to worry about.

Maze has decided to take things just one step further in her overall hatred towards Chloe and recently she’s begun to stalk the detective.