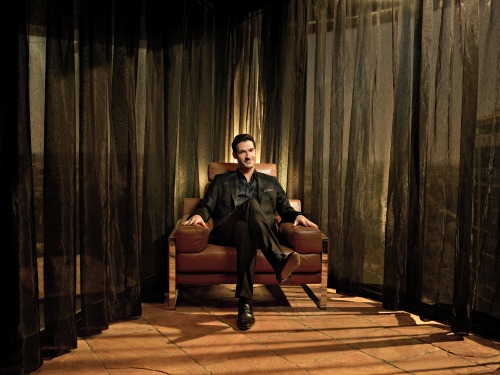 ‘Lucifer’ season 2 spoilers tease that Amenadiel [D.B. Woodside] has been left heartbroken by [Mazikeen] Lesley-Ann Brandt. Another layer that may be added to season 2 of the Fox hit show will be Lucifer Morningstar’s [Tom Ellis] discovery that Chloe Decker [Lauren German] is possibly half angel and half human.

During the panel discussion for ‘Lucifer,’ Woodside and Brandt talked about Amenadiel and Mazikeen’s relationship. “[Amenadiel] might be more in love than [Mazikeen] is. She doesn’t even know what love is.” Amenadiel will need to deal with several very human emotions, including the heartbreak he feels after being abandoned by Mazikeen.

Adding yet another dimension to Lucifer’s season 2 spoilers reveal that Charlotte aka The Mother from Hell [Tricia Helfer] will only amplify Lucifer’s anxiety over her escape from Hell.

In the cliffhanger of season one, Lucifer was asked by God to recapture Charlotte’s soul and The Mother from Hell won’t be easy. Charlotte will make Lucifer’s relationship with Chloe even more complicated than it already is.

At Comic Con 2016 in San Diego, Tricia Helfer revealed that Charlotte’s reason for escaping Hell and returning to Earth is to get back what has been taken from her. “At the end of it, [Charlotte] is a mother that loves her sons and she wants to be with them.”

‘Lucifer’ season 2 spoilers reveal that Charlotte is expected to reveal to Lucifer why Chloe is immune to his charming ways. Either Chloe is an angel or she is a half human half angel.

This would explain why Chloe was able to recover so quickly after being shot and taking two bullets to her abdomen. Also, the writers spent a lot of time stressing that Chloe is human during the first season.

It appears that Charlotte is the one with all the answers or at least some of them. If Chloe is half angel half human she certainly isn’t aware of that fact.

‘Lucifer’ season 2 spoilers tease that viewers will need to watch for clues as Lucifer attempts to solve the problems he has encountered with Chloe. ‘Lucifer’ returns to Fox on Monday, September 19.

Share your thoughts in the Comments section below, on our Facebook Page,  join our Facebook Group or Head over to our Discussion Board to Talk Lucifer!