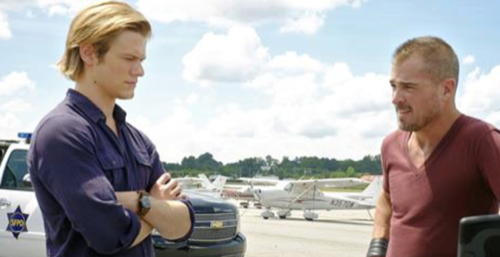 Tonight on CBS their action adventure drama MacGyver airs with an all-new Friday, September 23, 2016, series premiere episode.  On tonight’s MacGyver premiere, MacGyver and Jack Dalton are assigned to recover a dangerous bioweapon that has gone missing.

MacGyver is a reboot of the classic series. Lucas Till, George Eads, Sandrine Holt, Justin Hires and Tristin Mays Star in the Reimagining of the Classic Television Series

On tonight’s premiere MacGyver episode as per the CBS synopsis, “Angus “Mac” MacGyver (Lucas Till) and Jack Dalton (George Eads), special agents for the Department of External Services (DXS), join forces to recover a missing bioweapon that has the ability to destroy hundreds of thousands of people with one single drop.”

So don’t forget to bookmark this spot and come back between 8PM – 9PM ET! for our MacGyver recap.  While you wait for the recap don’t forget to check out all our television recaps, news, spoilers & more, right here!

As a remake of the original MacGyver, Mac is portrayed by Lucas Till, who may be familiar to fans of the X-Men franchise, wherein he portrayed Alex Summers/Havok. Jack Dalton is portrayed by George Eads, who some of you might recognize as forensics investigator Nick Stokes on CSI: Crime Scene Investigation.

MacGyver is busy flirting with Nikki Carpenter (Tracy Spiridakos) on the “wire”, and after a few sexual inuendos, Jack Dalton cuts in and asks them if they know they are on an open wire. Mac takes a fingerprint off of one of the cars outside the mansion party he is at, assuming he will need it to open a safe inside the house. No one at this point knows what is in the safe.

Mac enters the house and meets with Patricia Thornton (Sandrine Holt), director of field operations. Mac’s boss shows and tells him where everyone is and how to access things. She then tells him she will see him in 12 hours. Like the original show, Mac creates things out of nothing. He creates a magnet to cause ear pieces to malfunction, while his trusty partner Jack distracts the guards outside.

Mac realizes he needs all five fingerprints to open the safe. So the team improvises. He opens the safe and finds a biological weapon, not a nuclear weapon like they originally suspected. Of course, Mac lifts the bomb up and the alarms are triggered. Somehow, Mac escapes and screams for Jack to start the boat, as they are being chased by another boat, they managed to shoot the gas tank and the boat is running out of fuel.

Mac rigs the boat, tells Jack to jump and the boat explodes, but at least they got the weapon! When they get back to the van where Nikki was, they run into someone, John Kendrick (Vinnie Jones) holding a gun to her head; Jack tells Mac not to give it to him, but because he loves Nikki he hands it over. Nikki dies when he puts a bullet in her head.

MacGyver is living with his roommate, Wilt Bozer (Justin Hires), who is his best friend but best cover since he has no clue what Mac actually does for a living. We see Mac going back to flashes of when he was with Nikki, and although he says he is fine, Bozer knows he isn’t doing okay after his girlfriend died in a “car accident.”

While he is trying to regroup, Thornton shows up and has a new case for him, even saying that the biological weapon he gave back to the terrorist group is what their warning video was about. Mac says Nikki would have everything on the hard drive, and they begin working on the case.

Jack introduces the team to a new computer hacker named Riley Davis (Tristin Mays). She is a very questionable team player, but Mac thinks she is a perfect fit, even though she has a history with Jack. We find out that Jack was at one point dating her mom. Mac breaks her out of jail with a paperclip and even against Thornton’s wishes he says he needs her help, or Thornton could let the bomb go. While the tech team is trying to sensitively open Nikki’s harddrive, Riley takes a hammer to it and gets everything done.

MacGyver convinces Thornton to allow Riley to stay on the team, even though Thorton wants to put her back in jail. They chase after the men to San Francisco, and Mac says he will make the men come to them by using tin foil and Riley asks if he is joking and Jack says he never jokes about tin foil. He literally creates a smoke bomb in order to draw the men out of their rooms. As they wait for the men to appear, Mac sees Nikki and chases her instead of continuing on his mission.

Mac chases Nikki into the alleyway where there is a car waiting for her. She hopes in the car and John Kendrick opens fire on MacGyver. Mac knocks Kendrick out with a ladder and goes back to where the car was. He tells Jack and Riley that Nikki is alive and has been working with Kendrick the whole time. Mac doesn’t believe him that Nikki would do this, unless he had something on her. Kendrick tells him that there is a bank account in Prague in her mother’s name with five million dollars in it.

The team takes Kendrick’s voice and uses it to call Nikki back, where she tells Kendrick he shouldn’t be calling her and that she will see him in New York. They figure out that Nikki is at a private airport and MacGyver is insane enough to stop the plane. He is afraid of heights but he jumps on the tires and gets to the electrical board and forces the plane to return to San Francisco, where Jack and Riley are waiting.

Jack calls Thornton, who says this is really bad since Benjamin Chin is in the wind and the weapon is gone. Mac thinks about the nickname Nikki had given herself, Eliza A. Pittsinger and he realizes the target is San Francisco. Nikki tries to convince him that it’s in Tokyo, but he remembers a poem from 1907 on the anniversary of the San Francisco Earthquake, where over 3,000 people died in the fires.

They take a helicopter and are above the military truck that had the weapon. MacGyver jumps into the truck and realizes the bomb is meant to be air-born. As he is working to deactivate it, he is attacked by one of the men in the truck. Jack throws him a gun to use, but instead of shooting the guy, he hits him with it.

MacGyver gets the attacker out of the truck and gets the bomb, but says there isn’t enough time to stop the timer. He pulls out his trusty Swiss Army knife, cuts the top of the truck off with cords, and parachutes out of the truck. Truck blows up a few seconds later, and Mac has the bomb in his hands.

Mac ends the day by burning pictures of Nikki and drinking some beer with Jack and Riley. Thorton says they can keep the little “rascal” Riley. As they are celebrating, the team is told by Thorton that because they were compromised by Nikki they all have to move and change the team’s name. Mac comes up with Phoenix!

The episode ends with Nikki being transported, and as they go under a bridge, she uses her bobby pin to get out of her handcuffs and vanishes, leaving the bobby pin on the car floor. Will we be seeing Nikki again? What will MacGyver do or how will he react when he hears the news?

Be sure to tune in to watch CBS to watch MacGyver and be sure to check back for updates, news, rumors, and spoilers!