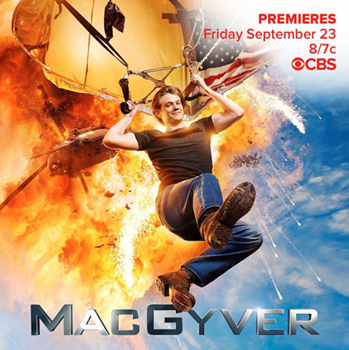 Tonight on CBS their action adventure drama MacGyver airs with an all-new Friday, October 7, 2016, episode.  On tonight’s MacGyver season 1 episode 3, the team head to Malaysia in search of a man funding a terrorist group, but their plan changes into keeping him alive after he is shot.

Did you watch last week’s episode  where MacGyver and the team attempted to rescue Sarah (Amy Acker), Jack’s former CIA partner/ex-girlfriend who went missing in Venezuela? If you missed it we have a full and detailed recap, right here for you.

On tonight’s premiere MacGyver episode as per the CBS synopsis, “MacGyver and the team are in Malaysia to extract a terrorist groups’ money man, Ralph (Oliver Cooper), who holds key intel to an impending attack. But the mission goes south when the man is shot, and now, with only a driver’s license and hand sanitizer available, MacGyver must keep Ralph alive in order to learn the terrorists’ plans.”

So don’t forget to bookmark this spot and come back between 8PM – 9PM ET! for our MacGyver recap.  While you wait for the recap don’t forget to check out all our television recaps, news, spoilers & more, right here!

In one of Somalia’s Emergency Aid Clinic is where Angus “Mac” MacGyver (Lucas Till) and Jack Dalton (George Eads) are when this episode begins. Mac says in his line of work no one lives forever, but he had hoped to at least make it until he was 30. Jack shares his bucket list and tells Mac it didn’t include running through a building Mac had set on fire.

Riley Davis (Tristin Mays) and Patricia Thornton (Sandrine Holt) are working from an undisclosed location, where Riley guides them out of the building. Thorton arrives just as Mac asks if she got the coordinates they send and she said she did. There is a drone strike set to hit in seconds on General Dolmar’s chemical weapons factory, and when Thorton counts down to the bombing, she tells them to come home.

Mac and Dalton get stuck in the building, after oxygen tanks explode and block their exit. Riley shows them a window, but it’s too far to jump. Mac fills 2 air mattresses with foam from fire extinguishers, and both him and Dalton survive the all. Dalton tells Mac he can, “cut pooping my pants off my bucket list!”

Mac comes home to relax but just as he walks in, he gets a call for work. Mac goes to see Jack at his dad’s gravesite, to bring him in to another mission, where Jack says “goodbye” to his dad and kisses his dad’s headstone. Jack tries to convince Mac to talk to his dad, because “some days” eventually run out.

The new mission is to go after Division 77 (“D77”), which is a group of mercenaries, or terrorists for hire. Extremists who turned in politics for cold-hard cash, and highly trained. All their finances back to this “inheritance” rich man named Ralph Kastrati, who Dalton calls “Punch face”. When Dalton explains what it means, Riley sarcastically said her mom dated a man like that once, meaning Jack.

Of course, the Phoenix Foundation have already tracked him and are working under the radar, as Dalton watches him, he keeps mentioning how much he wants to punch this guy in his face. They check everything out, and realize if they want to break in through the alarm system, it will take days. Mac jumps into action, explaining that when most kids were getting their laptops, Mac was taking his apart to figure out how they work.

MacGyver explains that it’s not the computer system that’s flawed, it’s the human using it. Mac makes a device to set his alarm off and they find out the code. Dalton is frustrated and asks if he needs to listen to this “a$$hat” all day. Riley explains that Ralph works off the Malaysian market, so he doesn’t have to listen to him all day, only all night. Dalton promises to “knock the curls off this kid.”

While Ralph is sleeping Mac takes Dalton’s sunglasses, breaks them and breaks into the mansion; while Mac is gathering paperwork and other intel, Jack goes to Ralph’s room. Ralph wakes up and runs like a pansy. Mac punches him in the face. Dalton lectures Mac that he is the computer, bomb and paper clip guy and he is the punching man.

As they escort Ralph out of the house, a sniper starts shooting and hits Ralph. Riley sees the sniper and tells her to find a doctor, and to meet them at the entrance. Dalton smashes the window, but Ralph had the car keys. Ralph has a sucking chest wound, Dalton jokes where is his duct tape when he needs it. and Ralph says, “Eyes on the road Jethro, this car is worth more than your house.” Dalton says as soon as Mac is done saving his life, he is going to kill him and he is already dressed for a funeral. Thornton calls and finds out Ralph is shot. She informs them that D77 knows about them and is speeding things up. Mac uses Dalton’s driver license to seal the bullet hole.

Riley finds the best doctor on the island, but he doesn’t speak English. Dalton and Mac also have a problem, they have snipers on their tail. Mac makes a smoke bomb out of the headrest, and causes chaos on the road, giving them a way to “smoke them”. The doctor said Ralph will be dead in 4 minutes if they don’t do something now.

MacGyver reveals that he got a “c” in biology, but he has no choice but to do the surgery. They lay Ralph in the back of the SUV, and the doctor on the golf course explains as Riley reads the translation part. Car jack is used as a rib spreader, and then needs something to suck out the blood, but Dalton refuses to suck anything off of Ralph.

Mac uses a hose from under the hood, and uses the windshield wipers to do the procedure. Riley and the doctor are on their way to take Ralph, but snipers arrive making Mac and Dalton even later to the Expo for their real mission. They manage to escape the snipers, but Ralph is stunned that MacGyver said he plans on killing him. Before Dalton and Mac could get passed the reception, Riley saves them by telling the receptionist that she has hacked their servers and she plans on exposing all their money laundering actions to the world.

Mac is trying to save Ralph, by killing him than reviving him, but they get interrupted by another sniper and need to escape. Mac says that the medication will make his heart slow down long enough for the snipers to think he is dead, and in an hour mac will come back to save him. Mac injects him and tells him to go die. Ralph gets to Mac when he tells him he wants to call his mom; he hasn’t spoken to her in years. Ralph reveals where D77 told him to set up a dummy corporation, and it is in Miami.

Mac and Dalton are inside a coroner van, where Riley gives them the revival medication. Dalton asks if they are sure they want to revive him, when they discover that D77 has the coroner and police on their payroll too and now they have taken Ralph’s body. They follow the car that has Ralph in the trunk, where there is an army of snipers, one of which is carrying a hacksaw.

MacGyver jumps into a dumpster and creates gas masks from the garbage. Mac creates a smoke bomb out of propane cylinders, one of the group escapes and Riley knocks him out. Mac gives Ralph the medication, and when Dalton comes out telling Ralph he needs to live. Ralph snores, wakes up complaining about his expensive clothes. Dalton says he is glad he is alive, but he still wants to kill him.

Thornton congrats them on their intel on D77’s Miami location in which they arrested 67 mercenaries. MacGyver says with Ralph’s interrogation they should be able to take down the entire organization. Thornton tells him it isn’t an interrogation, Ralph has agreed to testify, and be placed in the witness protection program.

Ralph calls Thornton “Jane Bond” and he is thinking Las Vegas or Miami, but she informs him he will be given a new identity and not ever reveal what he has done; saying it’s a fresh start. Dalton reveals that Ralph lost all his millions and is willing to start again, but before he leaves he hugs Dalton. Dalton tells him to give it back, Ralph had stolen his wallet.

Dalton and Riley arrive with beer to see Bozer and Mac creating a movie. Riley helps Bozer with the computer graphics and Dalton tells Mac to call his father, and that no one lives forever. Mac says that will never work, he is writing him a letter instead. Dalton makes fun of his snail mail idea, but Mac tells him it’s important to his dad.