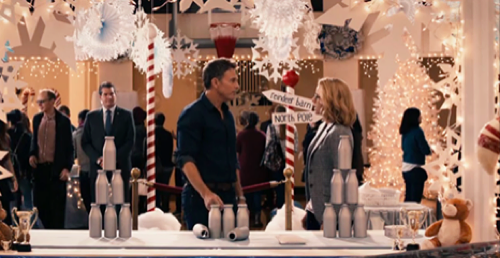 Tonight on CBS Madam Secretary airs with an all new Sunday January 10, season 2 winter premiere called, “Unity Node” and we have your weekly recap below. On tonight’s episode, Elizabeth (tea Leoni) tries to salvage a peace deal with Russia after an unexpected turn of events threatens to dissolve the agreement.

On the last episode, after they uncovered a secret that could ruin Maria Ostrov’s (Angela Gots)reputation, Elizabeth and President Dalton headed to Switzerland to meet with her and use the information as leverage to find a peaceful solution to the escalated conflict with Russia. Also, Dmitri requested to be released from his duties as a spy. Did you watch the last episode? If you missed it, we have a full and detailed recap right here for you.

On tonight’s episode as per the CBS synopsis, “Elizabeth tries to salvage a peace deal with Russia after an unexpected turn of events threatens to dissolve the agreement; at the same time, she gets dragged into dealing with an emergency situation aboard the International Space Station.”

Tonight’s episode of Madam Secretary picks up where we left off last episode – there was just an attack on car in Geneva. Elizabeth and the President are being rushed away in their car, they made it out without a scratch – but Maria Ostrov was in the car that blew up. It’s unknown whether or not she will survive. Elizabeth gets permission from the President to stay behind in Geneva and try to smooth things out. If Maria Ostrov doesn’t make it, then their entire peace treaty will be blown.

Back at headquarters in Geneva Jay confirms to Elizabeth that the Ukranians were responsible for the attack on Maria Ostrov. Apparently, it was a radical group called the “Knights of Kiev.” Their leader is Oleg Zelinski, and he made a statement that any more attempts to change the Russian borders will result in more violence. Elizabeth tells Jay to contact the Swiss and have them ground Melnik’s plane so that she can talk to them. Elizabeth receives a phone call from Henry – he wants to make sure she is all right. He is acting suspicious and won’t tell her where he is or when he will be home. Elizabeth hangs up on Henry and gets word that Maria Ostrov is dead.

Elizabeth sits down with Maria’s general – she tries to convince him to honor the treaty that Maria Ostrov signed before she was murdered. The general scoffs, he tells Elizabeth that Prime Minister Salikov has just been sworn in as acting President, there is an official three day mourning period – and then the Russians are going to make the Ukranians pay.

Henry heads to Switzerland and finds Dmitri’s sister at her cancer treatment center – he tells her that Dmitri would want her to go to the US with him so that she is safe. Dmitri’s sister is skeptical, she doesn’t understand why Dmitri would be working with Henry or the US. Talia informs Henry that she can’t trust him. Talia says she is not leaving – she is waiting in Stockholm for her brother.

Elizabeth sits down with Melnik, he insists that he has no information on the attack on Maria Ostrov. She kicks everybody out of the room – Melnik says he refuses to be “sad” about Maria, he says that the “bitch got what she deserved.” Elizabeth warns Melnik that that Russians are coming for his country – unless he helps them find Zelinski. Melnik shouts that President Bozek didn’t order the hit, and Zelinski is a psychopath.

Elizabeth finally returns home and greets her kid – Blake is there briefing her on her schedule for tomorrow. Blake tells her that there is one more thing she needs to know – her daughter is about to get kicked out of school. Apparently, her parents were supposed to do mandatory service hours at the school. Since they haven’t done any – they are not letting Alison return to school next semester. Elizabeth and Henry HAVE to work a booth at the winter carnival in a few days, or else Alison is out.

At work the next day, they get to work searching for Zelinski. He and his group are heavily armed and preparing for a fight. The President doesn’t want to “do any more dirty work” on Bozek’s behalf. Elizabeth informs him that finding the renegade leader is crucial to keeping peace. The President caves and sends his Admiral off to find Zelinski.

Meanwhile, there is another crisis that Elizabeth needs to deal with. The North Koreans launched a satellite without clearance from NASA. Their satellite exploded in orbit – and smashed in to the space station. Two Americans, and an astronaut from Japan are trapped in space without space suits. There are also Russians trapped in another part of the satellite. Apparently, Russia is planning on sending up an unmanned Russian spaceship called Soyuz to rescue their guys. In order to save the astronauts – Elizabeth is going to have to cut a deal with Russia, and get suits for their men from China to send on the Russian ship. No big deal …

Henry is still in Stockholm – he meets with his handler and begs her to let him tell Talia that Dmitri was a spy. That’s not an option. So, Henry is on to phase two – he thinks they should basically just kidnap Talia and take her to the US. While they are arguing, his handler gets a message – the Russians aren’t looking for Talia any more, that means that Dmitri has been captured and if he is not dead then he will be soon. Henry leaves – he says he is going to give Talia the bad news about her brother.

Elizabeth calls China – she fills them in on the Soyuz and the astronauts trapped in space. Elizabeth promises that the President will lobby Congress to get China’s space ban lifted – China agrees to check with their space dept to see if they have the suits that Elizabeth needs. After Elizabeth hangs up she gets a phone call from the President, letting her know that he just got word that Dmitri is dead.

Elizabeth heads home – and Henry arrives home safely. He doesn’t want to talk about Dmitri, he obviously still is holding a grudge. He tells Elizabeth that he loves her – but he can’t talk about this right now and heads to bed.

The next morning Elizabeth gets a phone call from work and heads back to the office. China still hasn’t agreed to hand over the spacesuits. While she is telling Nadine and Glenn to deal with it – she gets a phone call from the Russian General. He says that if China has the suits, he will send them on the Soyuz. But, he demands that Russia gets all of the credit for the rescue seeing as how they stole the suits from Russia to begin with.

Now, Elizabeth heads in to the President’s office. The admiral and his men have located Zelinski – they watch over live camera feeds as they go in to capture Zelinski and the Knights open fire the US Army, and they shoot down their helicopter. They got Zelinski in custody – but they lost 6 American soldiers in the process.

Henry and Eizabeth rush to Alison’s school to run a booth at the winter carnival. Alison is embarrassed when her parents are obviously arguing with each other. Elizabeth drags Henry to the gym, she demands to know when he is going to get past this. Should she be calling a divorce lawyer? Henry sits down and has a melt down – he doesn’t blame Elizabeth, he blames himself. He shouldn’t have played God with Dmitri’s life.

Blake interrupts Elizabeth and Henry’s talk – he says that they have an emergency. Melnik is on the phone, President Bogev doesn’t want to hand Zelinski over to the Russians – he has a lot of followers and he doesn’t want to upset them. Elizabeth snaps and screams at Melnik that they lost 6 soldiers capturing Zelinski for them and if they don’t hand him over to Russia to avoid a war, the US is pulling all of their troops out of the Ukraine and they are on their own.

Back in her office, Elizabeth chats with the Russian General about Zelinski. She tells him that Melnik is going to hand him over – but in exchange he has to promise to honor the treaty that Maria signed. The General says that he is not going to be able to make that promise.

Meanwhile in space – the Soyuz has arrived. The Russians have arrived with the space suits. The station commander warns the Russians to get directly in the shuttle – but the Russian astronauts refuse to leave without rescuing the astronauts from China and America. Ironically, the three countries can’t seem to get on the same page. But, in space the astronauts could care less about the war drama down on Earth and are risking their lives to save each other.

Elizabeth and President Dalton video chat with the General and tell him about the Russian astronauts saving the American and Chinese astronauts. They use the story to try to convince the General to keep peace – the General wont budge, but the Russian Prime Minister unexpectedly speaks up and says he wants to save lives and honor the peace treaty.

Henry meets with his handler late at night – he informs her that he is quitting after the Dmitri fiasco, and he wants nothing more to do with the spy organization.