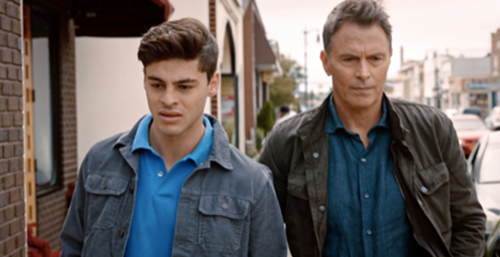 Tonight on CBS Madam Secretary airs with an all new Sunday, November 13, 2016, season 3 episode 6 called, “The Statement” and we have your Madam Secretary recap below. On tonight’s Madam Secretary episode, Henry (Tim Daly) tries to help Dmitri, (Chris Petrovski) who’s having trouble adjusting to his new life in Phoenix.

Did you watch last week’s episode where when an imminent U.S.-France state dinner was jeopardized after a CIA operative was captured by French intelligence, Elizabeth had to negotiate the operative’s release while keeping the event on track? If you missed it, we have a full and detailed recap right here for you.

On tonight’s Madam Secretary Season 3 episode 6, “When Elizabeth discovers that a terrorist bombing at an Illinois coffee shop was funded by someone with close ties to the Saudi government, she makes a bold move after the Saudi ambassador refuses to bring the man to justice.”

Tonight’s episode of Madam Secretary kicks off with a man in a crowded Starbucks in Illinois – he orders a coffee and then sits down and reveals that a bomb is attached to his chest, the bomb goes off.

Daisy is trying to hold a press conference full of rowdy reporters who want information about the terrorist bombing in Illinois. One reporter reveals that Daisy’s ex, Matt Mahoney, is a member of the Islamic church that the bomber attended, and he just donated money to that church a few months ago.

Matt is sitting in his office and the phone is ringing off the hook with reporters. Daisy storms in to Matt’s office and demands to know why he didn’t tell her about the bombing. Matt snaps at her that he is more worried about his friends and family in his hometown that was just attacked, and that he donated money to Catholic churches too.

Matt and Daisy head to the office meeting – Matt gives Elizabeth the speech that he wrote for her about the bombing. Daisy wants to address the situation with Matt, but Nadine and Elizabeth shut her down. The investigation is with the FBI, there is nothing that they can do about it right now. After the meeting, Nadine tries to have a chat with Matt, he’s a bit on edge. Matt confesses that he is just worried about his mom, and she is volunteering at the mosque.

An agent from the FBI pays Henry a visit at work – he says they need to talk about Dmitri. Dmitri has been working as a TV repair guy, and he is not assimilating well in the US. Apparently, Dmitri snapped on the job and broke a woman’s TV. The agent wants Henry to get involved and help him get Dmitri under control before he blows his cover and new identity.

At the McCord house, later at night, Henry and Elizabeth are discussing college essay topics for Allison. She doesn’t want to write about politics, or her parents’ jobs, she wants to writer her college essay about her online makeup tutorial videos. Obviously, Henry and Elizabeth aren’t thrilled, but they support her. Henry is packing for Arizona to meet with Dmitri, Elizabeth thinks its foolish and the FBI has got to have someone else that can take care of Dmitri. She snaps at Henry that he doesn’t need to go all the way to Arizona for a hug.

Elizabeth heads to work the next morning – Nadine and Jay are waiting for her and they have bad news. They have learned that the bomber in Illinois was funded by a man named Amjad Majeed, and he is the President of Saudi Arabia’s right-hand man. The US is allied with the Saudis, and it looks like members of their government may be aligned with Isis.

Elizabeth calls an emergency meeting with the ambassador of Saudi Arabia. She threatens to cease arms deals with Saudi Arabia unless they make Majeed pay for the death of the 21 Americans at the coffee shop. The ambassador isn’t threatened, he points out that Liz and Dalton are on their way out of the office – and he’s sure one of the new presidents will be willing to work with the Saudis.

Meanwhile, the Matt Mahoney story isn’t going away like Elizabeth’s team had hoped that it would. The press is having a field day, especially since the election is coming up. Matt is sweating bullets, Russell has called him in for a meeting, he’s certain that he will be fired. Matt and Nadine are surprised when Russell orders Matt to write a speech about the absurd terrorist allegations when Matt refuses, Russell freaks out on him and shouts at him that if he is not a terrorist he will let the people know.

Henry arrives in Arizona and bails Dmitri out of jail. Dmitri explains to Henry that he has nothing left to live for, he used to be a sergeant in the army, and now he has to fix TV’s and watch news coverage of bombings on them. He begs Henry to take him back to DC and find him a job actually making a difference.

A woman named Victoria Butler shows up at Elizabeth’s office – she has a photo of her daughter, she was killed in the bombing at the coffee shop. She cries to Elizabeth that she had just gotten her driver’s license, Victoria want to know what is being done about the Saudi Arabians, and she wants them to pay for what happened to her daughter. Elizabeth is obviously moved by their encounter.

Later, Nadine stops by Jay’s office. She wants Jay to take Matt out for drinks and give him a shoulder to lean on him. Jay whines that he was supposed to go home, but Nadine gives him a speech about male bonding and guilts him in to taking Matt out.

Liz heads home and calls Henry. He asks if there is any possible way that Dmitri could come back and work in Russian Intelligence. Liz reminds Henry that they promised the Russians that they wouldn’t use Dmitri – and if they did, it won’t be long until the Russians figure it out.

Matt and Jay head out on their man date – and all hell breaks loose. Some drunk guys in the bar recognize Matt from the news and begin Harassing him and calling him a terrorist. Matt and Jay wind up in a bar brawl. They head to work the next morning with black eyes. Matt has had enough – he calls a meeting in Elizabeth’s office. He scolds them all for doubting his loyalty to the country. Matt says that he shouldn’t have to speak out publicly and defend himself. He is sick of every Muslim being implicated because of one radical Islam blowing up innocent people. Elizabeth is moved by his speech, and says that she will deal with Russell and no one will make him speak publicly.

Liz and her team head to Canada for a summit, and to see the Saudi Arabian president there. Elizabeth brings along Victoria Butler, the mother of one of the bombing victims. Victoria confronts the Saudi president and tells him that she wants justice to be brought to his consultant and cousin Majeed.

Dmitri heads in to a hidden FBI office behind a pizza shop where Henry is waiting for him. He delivers the bad news, that they can’t offer him a job in Washington. Henry did bring a long a surprise though – Dmitri’s sister Talia, who had no idea that he was alive. Henry and Elizabeth got Talia’s via fast-tracked so she can move to Arizona with Dmitri.

The Saudi Arabian leader is furious that Elizabeth attacked him with Victoria in front of the whole summit. Liz vows that she will not rest until she makes sure that Amjad Majeed pays for what he did. Elizabeth heads home and Henry has good news for her – Allison’s college essay is actually amazing, she somehow used her makeup tutorial videos to express her thoughts on feminism and democracy.

Elizabeth heads home and Henry has good news for her – Allison’s college essay is actually amazing, she somehow used her makeup tutorial videos to express her thoughts on feminism and democracy.

Tonight’s episode ends with a new report – the Saudi Arabians arrested Majeed on charges related to funding the Illinois bombing, it looks like Elizabeth’s threats paid off.