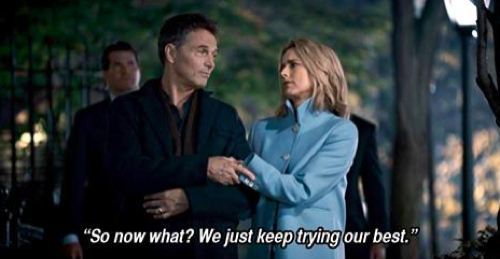 Tonight on CBS Madam Secretary airs with an all new Sunday January 17, season 2 episode 12 called, “The Middle Way” and we have your weekly recap below. On tonight’s episode, Elizabeth, (Tea Leoni) to her surprise, is met resistance when she travels to Myanmar to sign a Pacific Rim trade agreement, which will modernize the country’s power grid and benefit several of its trading partners.

On the last episode, Elizabeth tried to salvage a peace deal with Russia after an unexpected turn of events threatened to dissolve the agreement; at the same time, she got dragged into dealing with an emergency situation aboard the International Space Station. Did you watch the last episode? If you missed it, we have a full and detailed recap right here for you.

On tonight’s episode as per the CBS synopsis, “Elizabeth, to her surprise, is met resistance when she travels to Myanmar to sign a Pacific Rim trade agreement, which will modernize the country’s power grid and benefit several of its trading partners. Meanwhile, Nadine attempts to mend her relationship with her estranged son.”

Tonight’s episode of Madam Secretary kicks off with Elizabeth heading to work – she greets her neighbor outside of her house and he scowls at her. Elizabeth arrives at the office and her entire team is waiting for her at the elevator – Daisy announces they have to brief her for her upcoming trip. After all, she is the 3rd Secretary of State to visit Myanmar in 50 years, and she is going to make the front page of all of the papers after she signs the Mid-Atlantic trade agreement.

Nadine says there is a problem – Ambassador Arlen Maxwell has ethical concerns about the landmark trade agreement. He is supposed to be an American ambassador – but he is more concerned about the interests of the Myanmar people. Also, there is a bit of a conflict of interest, he has a gold mine in Argentina. And, he just got out of a messy divorce that was in all of the tabloids.

Elizabeth calls Maxwell and he has a list of problems with the trade agreement – it’s going to displace villagers and farmers in Myanmar. She points out that they are trying to modernize Myanmar, and at the end of the day the positive effects clearly outweigh the negative. Maxwell says that President Shwe has problems with the agreement too, he wants to talk to President Dalton. Liz informs him that is not necessary – she is in charge and Ambassador Maxwell hangs up on her.

Elizabeth and her team sit down to go over the trade agreement to see if Maxwell’s concerns are valid. She tells them that the plan is solid, they just need some talking points to put the Ambassador at ease. Meanwhile in her office Nadine makes a mysterious phone all and leaves someone a voicemail and says she is coming to Myanmar. Afterwards, Nadine tells Elizabeth that she is coming with her – she wants to see her son, who just happens to be living in Myanmar. Elizabeth is shocked she had no idea Nadine had a son.

The next day, Elizabeth packs her bags and tries to say goodbye to her kids while they are eating breakfast with Henry. She is a bit put out because they don’t jump up to send her off. Henry and Elizabeth’s neighbor Ted arrives at their front door – he has a whole list of neighborhood laws that they have violated – and they want the McCord family to move. Apparently, they are sick of their security teams hogging all of the parking spots with the black SUV’s. Henry convinces Ted to bring all the neighbors over for mimosas to that they can talk about it like adults.

Nadine and Elizabeth arrive in Myanmar, and they are shocked to see that the US ambassador Maxwell is leading a protest of their arrival. After they get settled in – Elizabeth pays Maxwell a visit and interrupts his meditation in a jail cell where he was tossed for the riot he started. Elizabeth informs him that he is officially removed from his post as the American Ambassador.

Nadine heads out in to the streets of Myanmar in search of her son Roman – a woman answers the door and introduces herself as Roman’s girlfriend Shindy. Apparently, her son is not home, he is at band practice. Shindy promises to tell Roman that she stopped by – Nadine leaves her contact information and hotel with Shindy so that Roman can see her before she leaves. Shindy closes the door and Roman is standing right there – she lied for him, he really was home, he just didn’t want to see his mother.

Meanwhile, Maxwell is still hard at work trying to convince President Shwe not to sign the peace treaty with Elizabeth. Shwe brushes off Maxwell’s concerns and tells him to go back to the US. Maxwell shouts that his work in Myanmar is not done, and then he pulls out a gun and takes President Shwe hostage.

Elizabeth is shocked when she hears what the American Ambassador has done. Of course his demands are simple – he will let the President go unharmed as soon as Elizabeth cancels the trade agreement. Elizabeth calls Henry and asks him for advice, she needs to know how to get through to Maxwell and anything Henry knows about Buddhism. Henry tells Elizabeth that she needs to find Maxwell’s Buddhist mentor, that is the only person that Maxwell is going to listen to. Elizabeth sends Nadine off to find Maxwell’s mentor – to see if he can talk down the crazy Ambassador and help save President Shwe.

Blake heads over to the McCord House to help Henry with the brunch with the neighbors since Elizabeth is stuck in Myanmar. Meanwhile, the brunch takes an ugly turn and Blake starts shouting with Ted over global warming and the SUV’s. Henry snaps and tells Ted that “matters of national security take a precedent over his garbage cans.” Then, Henry kicks all of neighbor out an dares them to try and kick them out of their neighborhood.

In Myanmar, the Buddhist mentor arrives and Maxwell lets him in to the room where he is holding President Shwe hostage. Maxwell calls Elizabeth on a secure line, he tells her that he is willing to go to prison for the rest of his life and he is totally cool with that if it means that Elizabeth changes the peace treaty. Maxwell begins talking about his “path” and “self-deprication.” Maxwell is talking about the new water system in Myanmar, and then a gun shot rings out and the phone suddenly goes dead.

A member of the Myanmar army informs Elizabeth that one of their snipers shot Maxwell – he in injured but will survive. Elizabeth rushes in to talk to President Shwe. Maxwell got to the President, he doesn’t want to sign the treaty now, he agrees with Maxwell – the hydroelectric dams could destroy their country and he is not happy that they are using China’s manpower to build the dam, he is afraid that China will steal their water rights and soon own the whole country.

Elizabeth informs Shwe that it is too late to change the terms of the treaty, but she promises to take a tour of the city to see how vital water rights are.

Nadine’s son Roman arrives outside o the embassy – he heard about the President being kidnapped on the news and he was worried about his mother. They get in to a shouting match outside. Roman reminds her that she “cut him off” after he dropped out of Juliard. Nadine shouts that she spent her life’s savings to send him to that college. Nadine finally settles down and tells Roman that she wants to put all of this behind them – and get back on speaking terms. She tells Roman that she loves him and rushes back inside to help Elizabeth with President Shwe.

When Nadine returns Elizabeth tells her that it is “over,” they are going to have to return home without the trade agreement. President Shwe is refusing to sign. Nadine says that the trip wasn’t a total loss – she got to see her son Roman. Elizabeth is inspired by Nadine and her son Roman working out their issues, she tells Nadine to get the Chinese foreign minister on the phone for her one last time.

That night Elizabeth returns home and Henry is up waiting for her – she is exhausted, but her last ditch attempt to smooth things over with the Chinese and Myanmar worked and she got the treaty agreement signed. Henry tells her that she might have to work her magic on the neighbors, because he royally screwed up the brunch. They head outside and Elizabeth calls the President and has him order the security to turn off their SUV’s and not leave them running overnight, that should pacify their neighbor Ted for the time being.