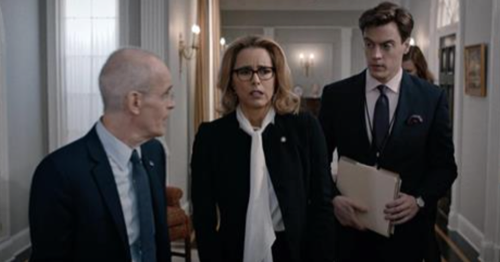 Tonight on CBS Madam Secretary airs with an all new Sunday March 27, season 2 episode 18 called, “On the Clock” and we have your weekly recap below. On tonight’s episode, Jane Pauley grills Elizabeth; (Tea Leoni) and Henry (Tim Daly) attempts to help the NSA locate the terrorist Jibral Disah.

On the last episode, Elizabeth accompanied Alison on a college campus tour, during which she became the center of attention when ambushed by groups protesting a Chilean mining operation. Elsewhere, Henry and Jane worked with Jose Campos in an attempt to track down Jibral Disah’s third wife, Hijriyyah. Did you watch the last episode? If you missed it, we have a full and detailed recap right here for you.

On tonight’s episode as per the CBS synopsis, “Elizabeth holds peace talks between the prime ministers of India and Pakistan, but negotiations are stalled when a mysterious plane crash involving their countries prompts a reevaluation of the deal. In other events, Jane Pauley grills Elizabeth; and Henry attempts to help the NSA locate the terrorist Jibral Disah.”

Madam Secretary was meeting with historic enemies on tonight’s all new episode. Apparently she was going to be sitting on a meeting between India and Pakistan as they discussed the much disputed region that lies between their two countries and that also both claim sovereignty over. Yet, before she could be allowed her place at the table, Elizabeth McCord had to somehow sell these discussion talks to the American people as the way forward.

So Elizabeth was told at the start of her busy day that all she had to was sit down for a puff piece with Jane Pauley. However, Pauley later decided to stray away from what was supposed to be a profile piece and instead go for the more hard-hitting news angle. Like whether or not peace could actually come to fruition between Pakistan and India? And should the Dalton administration be worried about the recent “Doomsday” findings?

Subsequently there’s this thing called the “Doomsday” clock. This clock was first mentioned during the cold war and the nuclear arms race because it’s supposed to countdown the time left until the end of the world. Which was what many believed would happen if the world ever did enter an all-out nuclear war.

Only times have changed and the “Doomsday” clock much less that the people that take in global events to determine how close till doomsday the world actually is – is treated something of a joke. Yet the joke got very real recently when Jane mentioned that someone had shorten the time from four minutes till to “Doomsday” to three minutes to “Doomsday”. So Elizabeth was forced to go on the defensive to protect her president. Who she believed was doing an admirable job in office.

But it was thing to say that the clock isn’t privy to what goes on behind closed doors and its quite another to find out that her meeting with two Prime Ministers had just gone up into smoke because of a misunderstanding. Unfortunately, a Pakistani plane crashed in India and to make matters worse the Pakistani then tried to enter India without India’s consent in order to carry out a rescue mission. So it would have bad enough if it was simply one country encroaching on another yet the real dilemma was what was on the flight to begin with.

The Pakistanis had been carrying a nuclear warhead on that plane as well as plenty of ammunition and therefore the only one to stop it from going off was for the two countries to suddenly work together. Though, by that point, all trust was lost and so Elizabeth had to find a way to get both prime ministers to see eye to eye again. And the only thing that they could ultimately agree on was that the Americans, thereby a third party, take a look at the bomb in order to diffuse it.

Yet, the Pakistanis had again withheld information. They had mentioned that they had nuclear warheads but failed to alert their allies in this situation that the warhead had instead been a sophisticated hydrogen bomb. Something a little more updated than what many had initially believed they ever had. So Elizabeth and the president had to then convince India to let such a bomb go and, once they did, they then had the much larger task of convincing the Pakistani Prime Minister to leave the bomb with them. The Americans.

And apparently the Prime Minster had found even the thought of doing that, offensive. He said that there was no way he would betray his country by handing one of their bombs away and that this incident was bigger than him winning the next election. So when the President and Elizabeth had tried to tell him that there was a chance his country could ended up going to war with India if he doesn’t allow the Americans take control of the bomb, he said that was a chance he was willing to take.

Although that proved to be a hard to sell angle with the American people. Elizabeth had had her whole staff running around in an attempt to put out fires. Only there was no way to put a lid on the situation and India had already taken action. India felt if they couldn’t hand over the bomb to the Americans then they might as well keep it on their own soil and so that resulted in there being riots in Pakistan.

Pakistan then feeling slighted and the more radicalized portion of their people wanting to overthrow the government they felt was too weak on their “enemies”. So the government was sadly near to collapsed, but still their Prime Minister refused to negotiate and India had felt they had more than tried to be fair what with wanting the Americans to take charge. But Elizabeth didn’t want an entire country to fall just because of pride so she went back to the Pakistani Prime Minister and she arranged a deal that many would never know about.

Elizabeth arranged for the prime minister to alert the U.S. government to their entire arsenal and to keep them up to date on what they do or do not have in exchange for them to get India to back off. That way the Americans won’t be blindsided again and also it would allow them to stop warheads from ended up in the hands of radicals if Pakistan were to ever fall.

And thus a deal was struck behind closed doors that would allow everyone to save face. Meanwhile, though, Henry had found a way to get Ms. Ayyad to see sense. His people and one coworker in particular had wanted to detain Ayyad in order to force her to comply yet Henry preferred something else. He chose to talk to Ms. Ayyad about what had really become of her student Hijriyyah and how the young women needed their help. So the former teacher had handed him an old class picture of Hijriyyah that the spooks could then use as a trusted attachment in an email to her.

Therefore the second she opened it, it revealed her exact location and no one got hurt.