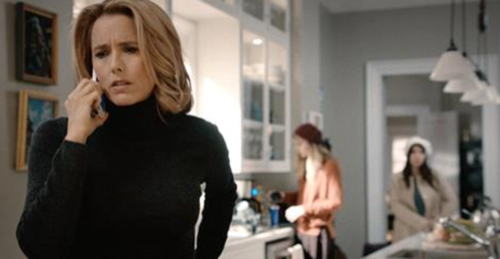 Tonight on CBS Madam Secretary airs with an all new Sunday March 20, season 2 episode 17 called, “Higher Learning” and we have your weekly recap and review below. On tonight’s episode, Elizabeth  (Téa Leoni) accompanies Alison (Kathrine Herzer) on a college campus tour, during which she becomes the center of attention when ambushed by groups protesting a Chilean mining operation.

On the last episode, Elizabeth was presented with the opportunity to question a person who claimed to know the whereabouts of the most-wanted terrorist in the world. In other events, Stevie brought her boyfriend home to meet her parents. Did you watch the last episode? If you missed it, we have a full and detailed recap right here for you.

On tonight’s episode as per the CBS synopsis, “Elizabeth accompanies Alison on a college campus tour, during which she becomes the center of attention when ambushed by groups protesting a Chilean mining operation. Elsewhere, Henry and Jane work with Jose Campos in an attempt to track down Jibral Disah’s third wife, Hijriyyah.”

Tonight’s episode of Madam Secretary kicks off in the Andes Mountains in Chile, a truck full of Americans is heading up the mountain. The road is blocked off by protestors, and they are violent – they don’t want them mining their mountains. They attack one of the men in the truck and smash the window.

Elizabeth and her daughter are getting ready for a trip, Alison’s college tours. Elizabeth gets a phone call from Blake – he tells her about the protests at the gold mine in Chile. Elizabeth tells Alison she has to run to the office for just five minutes. Alison tries to get out of the trip and says that her sister Stevie can take her. Elizabeth won’t hear it – she insists on going on the college tour with her daughter, it’s a huge deal.

Henry is already at the office, he and his team are briefing Jackson on what they have found on Jibral Disah’s latest wife – which isn’t much more than a school photo from 2011. Apparently Hijriyah has been living under the radar. Russell is not happy, he tells them that they need to find the girl NOW. Henry has a plan, there is a woman living in Delaware that was a teacher at Hijriyah’s school when she was a student. Meanwhile, Jose wants to take a more aggressive approach – he wants to contact some extremists and see if they will work the US and give them info on Jibral’s wife.

Elizabeth arrives at work – Nadine tells her that the protests are growing in Santiago. The company, Hercutel, bought the rights to the mining fair and square. President Contreras has had a change of heart, he has been making statements to the press and saying that Hercutel low-balled them. Hercutel wants their employees to be guarantee their safety in Chile, Elizabeth tells Daisy to draft a statement to President Contrera and ask them to stop throwing rocks at the Americans.

Elizabeth, Stevie, and Alison arrive at the college for the tour. Alison is not happy when they arrive and there is a marching band waiting for them. She didn’t want to be treated special because she was the Madam Secretary’s daughter. The tour is going smoothly, until a group of college kids corner Elizabeth and demands to know what she is going to do about Hercutel destroying Chile for gold. She tries to argue that it is between Chile and Hercutel, and the agreement they signed. The college kids get rowdy and Elizabeth and her daughters are dragged away by security. Alison is fuming, she just wanted to go on a “normal college tour.”

Back at the hotel room, Alison is miserable. Elizabeth is trying to cheer her up – but she has bigger problems. Blake shows her videos that the college students uploaded – and they edited what she said to make the problem with Chile ten times worse. Russell calls Elizabeth screaming, apparently her video on the internet inspired colleges all over the country to start protesting and Chile has shut down Hercutel’s mining.

Elizabeth demands to know why the White House is so worried about the Chile gold mine anyway. This shouldn’t be their problem. It’s between Chile and Hercutel. Russell explains that Hercutel is headquartered in Oregon, Dalton’s ally Westrick is from Oregon. This deal is worth over $2 Billion in revenue. He shouts to her that the youth vote counts and she needs to fix this ASAP.

Elizabeth has a video chat with Chile President Contrera’s right hand man – he explains that they froze the mining only temporary, because it was causing civil unrest. Elizabeth warns him to tell the President that if the agreement tanks, then no one is going to invest in their country again.

Meanwhile, Henry is working on Laila – Hijriyah’s teacher. He sends an immigration agent in undercover to question Laila at her job – but she won’t cooperate. It’s obvious that she knows something, Henry decides that he is going to have to go talk to her himself.

At her hotel room, Blake shows up and tells Elizabeth that Chile has lifted the suspension on the mining and Hercutel is back in business. But, he has a video online that he wants her to see. A man named Hugo says that he is a member of the Inhowaji people in Chile, and he is climbing the mountain for “one last time” and documenting it all online with live feeds. Hugo claims that Chile had a treaty with Inhowaji, and promised them that the mountain would not be destroyed. Chile violated that treaty by selling the mining rights to hercutel. Elizabeth is freaking out – this means that everything the college protestors were shouting at her is true.

Elizabeth calls Nadine and her team back at the White House, they do some research and confirm that Chile violated the treaty with the Inhowaji people. Elizabeth tells them to call Hercutel and shut down the mining again. Meanwhile, Nadine has more bad news – apparently one of the protestors from earlier has filed an official lawsuit against the State Department and says that one of Elizabeth’s security agents “violated his personal space.” The funny part is – the agent never touched him.

Henry tracks down Laila and convinces her to go out for coffee with him. He explains to her that he is a teacher too – they bond over teaching. Laila tries to say that she doesn’t know Hijiriyah – Henry tells her that if she helps them find her, it could mean the beginning of the end of the unrest in Libya. Laila caves, she says that she remembers her, but not much about her. Henry cuts a deal with Laila and promises to try and get Laila’s family out of Libya, she agrees to send out an email to Hijiriyyah and see if she gets a response. Henry fills Russell in on his plan, Russell says he has 24 hrs and if they don’t get a hit on Hijriyyah, then they are sending in special ops.

At the college, Elizabeth shows up at Bryan’s door with her entourage – he is the student that is sueing her. Bryan scoffs that he isn’t dropping the lawsuit. But, Elizabeth has a trick up her sleeve – Bryan’s parents on Skype, and they are not happy about what he has been up to at college, and are fuming that he is trying to sue the state department.

After Bryan agrees to drop his lawsuit, Elizabeth heads back to her hotel room and calls Nadine. Now Chile is demanding compensation. They are trying to bring in a third party to oversee a different mining tactic that will save the Inhowaji mountain. They have a bigger problem though, Hugo is still climbing the mountain and it does look good – there’s an avalanche and they cant get any one up there to rescue him.

Henry and Laila get an email back from Hirijjah – its encrypted and they cant get a location from it. But, Hirijjah is talking in code – and it sounds like she is ready to work with the US and is not happy that her father married her off to a terrorist.

Later that night at the hotel, Stevie realizes that Alison is gone. She snuck out to go to a party on campus that a guy invited her to that she met on the tour. Stevie covers for her and lies to Elizabeth and says that she went to a poetry reading – then Stevie rushes out to try and find her sister. She finds her at the party – Alison whines that she doesn’t want to leave because she is having fun. Meanwhile, some frat guys snap some photos of them at the party.

Stevie and Alison return to the hotel and Blake and Elizabeth are sitting around the TV – they are waiting to see if the rescue team finds Hugo. There is great news – Hugo is alive, and that means that the US won’t be blame for his death.

Elizabeth heads to bed, Stevie wakes her up and tells her that they have a problem – Alison says that they aren’t fun, and it is really bothering her. Stevie says that they need to stop being so careful all of the time. They decide to head out in the snow and go sled-riding in the idle of the night.