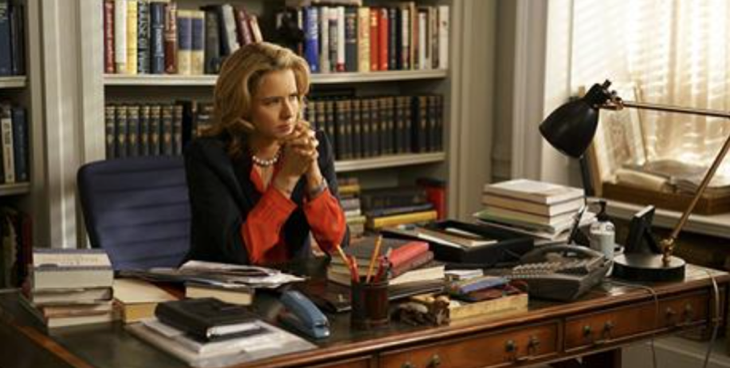 Tonight on CBS Madam Secretary airs with an all new Sunday April 10, season 2 episode 19 called, “Desperate Remedies” and we have your weekly recap below. On tonight’s episode, Elizabeth (Téa Leoni) comes up with a plan to get the terrorist organization Boko Haram to release schoolgirls they are holding captive, while Henry (Tim Daly) comes closer to pinpointing Jibral Disah’s exact location.

On the last episode, Elizabeth held peace talks between the prime ministers of India and Pakistan, but negotiations were stalled when a mysterious plane crash involving their countries prompted a reevaluation of the deal. Did you watch the last episode? If you missed it, we have a full and detailed recap right here for you.

On tonight’s episode as per the CBS synopsis, “Elizabeth comes up with a plan to get the terrorist organization Boko Haram to release schoolgirls they are holding captive, while Henry comes closer to pinpointing Jibral Disah’s exact location.”

Tonight’s episode of Madam Secretary kicks off in Maroua, the Norther region of Cameroon. An American prisoner is being questioned by one of Jibral Disah’s men, a member of Boko Haram – he shows him a machete that Jibral gave him as a gift. The prisoner says that he is not there on behalf of the Americans, he has a proposal from Iraq. Iraq wants to trade prisoners for 106 Nigerian schoolgirls that Jibral’s men are holding hostage. The Emir turns down Iraq’s offer – he says that the school girls are happy with them as wives to their soldiers.

Meanwhile, Blake is briefing Elizabeth in the back of a limo. Elizabeth spots Stevie’s boyfriend Jareth walking down the street, she makes the car pull over so that they can give Jareth a ride. In the car Elizabeth lectures Jareth about wearing boots in the snow.

The American soldier is back from Cameroon – his name is Chris, and he has come back to the US to describe his encounter with the emir, Hadi Bangote. Chris says he has a huge ego and he Hadi is pure evil. There is no way they are going to get the Nigerian school girls back from Hadi and Boko Haram. Jay says it is back to the drawing boards – Elizabeth wants those girls back to their families. After the meeting, Chris keels over and passes out, Jay tells someone to call 911.

Blake and Elizabeth get a message in the car – the State House is being evacuated. Elizabeth learns that Chris contracted Marburg virus in West Africa. The media is going to be all over it, he was supposed to be visiting wind mills and alternative energy resources – no one is supposed to know that he met with Hadi.

Henry and his team are still searching for Disah and his wife Hijriyyah. They brief Russell and tell him that they basically have nothing. All of their leads have not worked out. They are back to square one. Russell is furious – he shouts that he can’t take this back to the President, he needs something. He tells them to find something fast or it “is their asses.”

Elizabeth and Russell sit in on a meeting with the President on Marburg. They need to contain the virus in Western Africa before it wipes out half of the country. But, Boko Haram is not going to let the US interfere. They hate the Westerners, and they will want to use the outbreak to take over more territory. The President tells Elizabeth to contact Cameroon so that they can stop the deadly virus from spreading while there is still time.

Elizabeth sets her whole team up at her house so that they can work. Meanwhile, Jay is at the hospital under supervision since he came in to contact with Chris. Elizabeth calls to check in on him – so far he hasn’t shown any symptoms of Marburg Virus.

Ambassador Aissatou (from Cameroon) visits Elizabeth at her house – they discuss the Marburg outbreak in Africa. He tells Elizabeth that a US team will be welcome in Cameroon to set up a camp and assess the situation. Aissatou promises that his country will offer the American team protection.

At his office, Henry and Jane make a shocking discovery. They locate an underground tunnel – they think that is where Disah is hiding his bride Hijriyyah. Henry is trying to get a troop on the ground to check out the tunnel.

In Cameroon, an American team of medics has set up camp – a man comes in off the street complaining of fever and nausea. They get him set up on a bed and the doctor tries to open his shirt – he has a bomb underneath his clothes. The bomb goes off and the entire camp is blown up, American medics and all.

Elizabeth and her team are back to square one – their medic camp is gone, the disease in Cameroon has spread, and now no more medics want to go in because of the threat from Boko Haram. Russell tells Elizabeth to come up with a new idea. Elizabeth gets word that Chris’s health has taken a turn for the worse. She tells Jay to call his wife – Elizabeth wants to visit him in the hospital before he passes away.

Henry and Jane brief Russell on the underground tunnel. They think that they just spotted Disah going underground. But, they haven’t made a positive ID. Russell wants to send in a ground team to take Disah out, he tells Henry as soon as they get a positive ID to let him know so he can send ins the soldiers.

At the hospital, Elizabeth learns that there is an experimental treatment that could save Chris. It’s a trial drug – but there is one slight problem, they only have three doses of it. Elizabeth sits down with Jay and they have a chat. Hadi has contracted the Marburg virus. Elizabeth thinks they should offer him one of the doses of the experimental drug they have. Jay is furious, he can’t believe she is going to give one of the few doses they have to a mass murderer. She argues that it could be a good bargaining tool – they have book Haram right where they want them.

Elizabeth pitches her idea about offering Hadi the antidote to Russell, he is not happy and takes the plan about as well as Jay did. He heads to Henry’s office and is thrilled to hear they have a positive ID on Disah. He sends in troops to kill the terrorist – but their cover is blown. Disah escapes and they can’t take the shot because there are too many civilians in the way.

Elizabeth meets with Aissattou, she tells him that they are offering the trial drug to Hadi – he is furious too. Thousands of his people are sick and could use that drug, instead she is giving it to a murderer. Elizabeth needs his permission to negotiate with Hadi – he reluctantly agrees because it is for the greater good.

Elizabeth heads home and Jareth is there – plus he loves his new boots. Stevie takes Elizabeth aside and tells them that she and Henry need to stop stalking Jareth. She laughs that this is Stevie’s first boyfriend that they have ever actually liked. Stevie is offended, she takes it as her parents saying she has bad judgement in guys. Elizabeth gives her a pep talk and tells her that Jareth is a terrific guy.

Chris makes a full recovery and is as good as news – he heads to Cameroon to meet with Hadi. He offers him the dose of medicine and makes Hadi promise to protect that American medic troops and let them contain the virus. Hadi is on his death bed, he has no choice but to agree. He also agrees to return the Nigerian school girls after the dose cures his Marburg virus.

The Nigerian school girls are returned to their family – all 100 of them. Chris’s mission was complete – he heads back to the US. Elizabeth and Nadine are watching the news coverage. Jay returns to the office – and he is healthy as a horse. Jay takes Elizabeth aside and apologizes for freaking out on her at the hospital. Jay has decided to start a special project – he wants to get funds gathered to do more clinical testing on the Marburg virus and make more doses of the treatment.

Tonight’s episode ends with American troops rushing the underground tunnel and taking Disah’s wife Hijriyyah – they are making it look like she was killed so that Disah does not know that Americans have her.

Elizabeth and Henry head home after a long day of work – Stevie and Jareth invite them out for a double date.