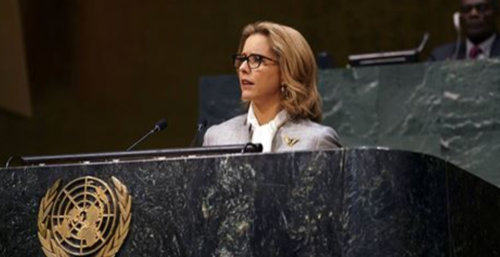 Tonight on CBS Madam Secretary airs with an all new Sunday April 17, season 2 episode 20 called, “Ghost Detainee” and we have your weekly recap below. On tonight’s episode, Elizabeth (Tea Leoni) formally condemns the terrorist group Hizb-Al Shahid when she delivers her first speech at the United Nations General Assembly.

On the last episode, Elizabeth came up with a plan to get the terrorist organization Boko Haram to release schoolgirls they were holding captive, while Henry came closer to pinpointing Jibral Disah’s exact location. Did you watch the last episode? If you missed it, we have a full and detailed recap right here for you.

On tonight’s episode as per the CBS synopsis, “Elizabeth formally condemns the terrorist group Hizb-Al Shahid when she delivers her first speech at the United Nations General Assembly. Later, she meets with the Russian Foreign Minister to discuss forming a coalition, but these talks create a conflict of interest with Henry, who is searching for a way to save Dmitri’s ill sister.”

Tonight’s episode of Madam Secretary kicks off with Henry awakening from a nightmare – the family is down in the kitchen getting making breakfast. Elizabeth is rushing to get out the door because she is going to New York for the day. She is giving a speech to the UN General Assembly and asking them to formally condemn Hizb Ah-Sahid. Her daughters make a big deal about it being her first speech in front of the UN.

At work, Henry stops by Oliver’s office – he wants him to check up on Talia Petrov (the sister of the student that Henry had working as a spy that was killed). Henry is still guilt-ridden over it, and he wants to make sure that Talia is doing okay –that is why he keeps having nightmares.

Elizabeth arrives in NYC and takes the stage in front of the United Nations – dozens of men and women from various countries listen in on her speech. She asks for the UN’s solidarity in helping the United States fight against Hizb Ah-Sahid. Afterwards, Matt compliments her speech and her team reassure her that she did a great job.

Elizabeth isn’t satisfied with just the UN, she wants to set up a coalition to help her fight against the terrorists. Elizabeth runs off to speak to Minister Advonin. She points out that both her and his country were victims of Hizb Ah-Sahid. Elizabeth wants Advonin to come to her office in the morning so that they can talk more.

Jane has Jibral’s wife Hijjriyah in the interrogation room with an Arabic translator. They have been working on the young girl for two days – and she hasn’t said a word. Henry sympathizes for Hijjriyah – he thinks that she has been traumatized by the entire ordeal. Jane and Henry get called to see Alex Jones at the White House Council.

Jones is not happy – they issued them a warrant to bring her in to custody. And, no one has even registered her in to the prison system or given her a lawyer. They are violating numerous laws and Hijjriyah’s rights. Jones agrees they have until the weekend is over – and then Hijjriyah goes in to the system as either a political refugee or an enemy combatant.

After their meeting, Jane takes Henry aside – she has bad news. Apparently, Demetri’s sister Talia has been arrested by Russian police. Talia wanted her brother’s remains, and they refused to hand over his body so she threatened to go public. Then, the Russians arrested her to keep her quiet, the last thing they want is for the people to know they executed Demetri. She warns Henry to stay out of it – but he rushes home and starts making phone calls.

Meanwhile, Henry calls Hijjriyah’s old teacher Laila and asks her to come talk to Hijjriyah. Laila agrees on one term – she wants her brother moved to the United States from back home. Later, Henry corners Elizabeth and demands to know why her department is taking so long approving Laila’s brother’s immigration. He shouts at her that the US is the “most powerful country in the world” and it is time they start using their power for good. Elizabeth is obviously a bit baffled about where his animosity is coming from.

Elizabeth heads to work – Nadine has a plan that she and the team put together over night for her meeting with Advonin. Henry calls Elizabeth at her office and apologizes for lashing out at her earlier this morning. Elizabeth reassures him that everything is fine – and she is signing Laila’s brother’s Visa and getting it sent straight over to him.

Laila arrives at the White House, she tells Henry that she will talk to Hijjriyah as soon as her brother’s Visa arrives. While they are waiting, Henry takes Jane aside and warns her that he hired a lawyer for Demetri’s sister Talia. Jane warns him he may have just made a huge mistake – his wife is busy meeting with the Russian minister Advonin, and she wants Russia to work with her to stop Hizb Ah-Sahid. Meanwhile, Elizabeth’s meeting with Russia doesn’t go well – Advonin has some impossible demands for NATO and Elizabeth can’t agree to them. So, he heads back to Russia.

Later, Henry and Elizabeth sit down for lunch. She tells him that his meeting with Advonin didn’t go well. Henry tells her that Talia has been arrested. Elizabeth tells him that they can’t rock the boat with Russia until after they take care of the terrorists. She has no idea that he already hired Talia a lawyer.

Meanwhile, Hirijjah is finally talking to Laila. She reveals that she isn’t scared to talk because of Jibral. Hijjriyah is scared of her father. Apparently, after he married her off to Jirbal, Hijjriyah tried to run away and her father killed her friend and their children. He told Hijjriyah if she left Jibral again – he would kill her too. Hiijjriyah tells Laila that she will help the Americans kill Jibral…but only after they kill her father first.

At work the next day, Elizabeth does some snooping around in Hijjriyah’s father Idris. She learns that he deals in black market oil and has ties to the Russian mafia. Elizabeth meets with Advonin and tells him that the President agreed to veto any Eastern European Nation from joining NATO for the next five years. It’s not what he wanted – but it is the best that he is going to get. Elizabeth wants more than just the coalition though, she tells Advonin that there is no deal now until he gives up Russian intelligence on Hijjriyah’s father Idris too.

Despite everything that is going on, Elizabeth and Henry still go to the farm for the weekend as planned. Elizabeth is thrilled to see her horse Buttercup, but he appears to have something wrong with one of his legs and the vet is there to do tests and see what is wrong with him.

Elizabeth and Henry head in to the house to fix dinner – Elizabeth gets an emergency phone call from Daisy. Daisy tells Liz that she got a phone call from Amnesty International, they are just warning he team that they are releasing a statement saying that Russia is wrongfully holding Talia prisoner. Elizabeth tells Daisy to ask them to throw out the statement. Before they hang up, Daisy warns Liz that Henry is the one that gave them the tip.

Elizabeth is furious, she freaks out on Henry for lying to her. She reminds Henry that if her deal with Russia falls through because he is meddling with Talia’s case – then they could lose the battle against the terrorists. Henry has a meltdown, he shouts at Elizabeth that he doesn’t want Talia’s blood on his hands. She has cancer, and could die in prison. Elizabeth tries to tell Henry that Demetri’s death was not his fault, nor was Talia getting arrested, but he doesn’t want to hear it.

After their huge fight, Elizabeth is up all night – she and Henry are not on good terms, and awkwardly drink coffee together. All of a sudden all of the phones start going off. The US orchestrated a drone strike in Libya, and they have officially killed Hijjriyah’s father Idris.

The vet shows up at the farm. She has bad news for Elizabeth, her horse Buttercup has terminal cancer, it’s not treatable and they are going to have to put down the horse. Elizabeth asks the vet to come back at night – she wants to spend the day with her horse. Henry gets called in to work, Elizabeth reassures Henry and tells him she and Buttercup will be fine – he has to go.

In the interrogation room, Hijjriyah cries tears of joy when she hears that her father is dead. Now she is a free woman. As promised, she gives Henry and his team details on where Jibral is hiding. He and Jane give Russell the good news. Then, Henry rushes back to the farm so that he can be there for Elizabeth and help her through her Buttercup Crisis.