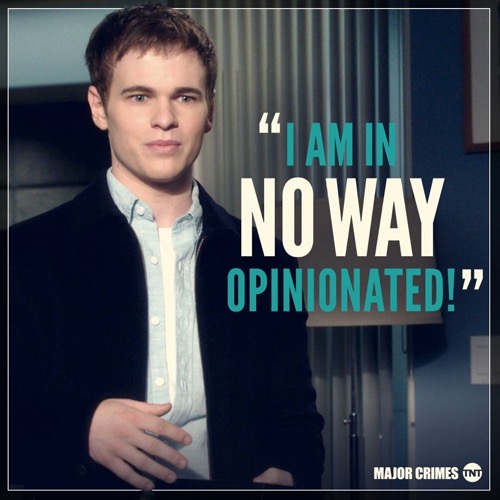 TNT Major Crimes airs tonight with an all-new Monday, September 5, 2016, and we have your Major Crimes Season 5 Episode 11 recap below!  On tonight’s Major Crimes episode the first in a 3-part arc, The detectives tie up loose ends from an investigation into white supremacists by auditing a serial killer’s trial.

Did you watch the last episode where a murder investigation had a personal impact on Sanchez (Raymond Cruz)?  If you missed it we have a full and detailed Major Crimes recap, right here for you.

On tonight’s episode of Major Crimes as per the TNT synopsis, “In attempting to clear up loose ends from their investigation of a gang of White Supremacists, Major Crimes detectives audit the trial of serial killer Dwight Darnell, and end up facing their most deadly case ever while Rusty’s psychologist, Dr. Joe, faces an unexpected confrontation that leaves his life in jeopardy.”

Dwight Darnell was on trial on tonight’s episode of “Major Crimes”. The former leader of a White Supremacist gang was apparently finally having his day in court and again he was representing himself during the trial. So Dwight had been trying to make a case for why he shouldn’t be on trial for murder because the people he killed shouldn’t be considered people seeing as they were attempting to poison the purity of the white race when he did something else that was completely out of the ordinary. Dwight had stopped going on and on about how he had been in the right and instead focused on Dr. Joe Bowman. Who had been the doctor that had profiled him when the police were initially looking for a suspect in the many murders.

So Dr. Joe who was on the witness stand had thought that Dwight was trying to fault in his profile and therefore he had agreed to Dwight’s little game just to prove the other man wrong. Dwight had said that if the doctor was so good at what he did that he could guess what a man like him would do next then he should able to do so again in court. However, right when Dr. Joe realized that Dwight was going to target him, Dwight had pulled out a gun and began firing at everyone. Dwight had shot Dr. Joe, the deputy in court that had tried to take out his stun gun, DDA Rosen, and unfortunately, he also shot Chief Taylor before Captain Raydor was able to disarm him. And so Dwight had seemingly done what he set out to do today when he caused mass panic and grief.

But what everyone wanted to know was how Dwight was able to get his hand on an armed weapon. The weapon he had used had actually been a part of the evidence and it was supposed to have been checked before he had been handed to him. So there was no way that the gun should have had bullets much less able to shoot yet Dwight was able to kill several people in a courtroom and no one believed that could have been because of an oversight. Especially as it was one thing for the gun to suddenly work and quite another for the deputy’s stun gun to go out of commission on the same day.

Later analysis had showed that someone had messed up the deputy’s stun gun so right away Major Crimes who had taken on the case had known that what happened in the courtroom had been an inside job. Someone had dismantled the deputy’s stun gun which he had given Dwight ample opportunity to kill the poor deputy and someone else had messed with the weapon while it was in the evidence locker because the only people that checked had been the recently departed deputy and DDA Rosen. So Major Crimes had taken a look at the security footage to see what happened and who he might have known the gun was about to go off. And, well, nothing to stood out.

Everyone had looked shocked and scared when Dwight began firing. Yet, the judge’s clerk had been the only other person whose name was on the sign-out sheet for the gun. So the police brought the clerk in and they had asked her why she had looked at the weapon so often however she claimed she didn’t and eventually she was able to show that someone forged her signature when they signed in to view the gun. The clerk said that everyone knew the combination to the weapons’ locker because the code hasn’t been changed since they first got the safe in 2004. And so there were possibly hundreds of people that knew the combination because the judge’s office had seen many clerks over the years.

Though while Major Crimes tried to figure out who had helped Dwight, they had a problem on their hands with Rusty. Rusty had heard about the shooting and so he had been worried about Dr. Joe however, no one could talk to Rusty about Joe because they believed Joe might have been the only intended target of Dwight’s. So the fact Joe survived the onslaught had to be kept closely under wraps until they understood why he had been targeted. And unfortunately, the only working theory they had as to why was because Joe had been the doctor that performed an assessment on Dwight.

When Dwight was first arrested, he had to be asked to see if he was sane enough for court so Dr. Joe had performed the assessment. But everything that Dwight told him was confidential. It was called doctor/ patient confidentiality after all so the doctor would have been legally irresponsible if he told anyone about his sessions with Dwight. So targeting Dwight didn’t make a lot of sense unless Dwight felt he had said something he shouldn’t have. Like naming names and/or locations for instance.

So the only person they could ask about that was the other white supremacist they had locked up. Dwight had died on the operating table so his friend in the Z-Brotherhood was the next best thing though their supremacist wanted protection first before he talked. Dwight’s friend had apparently implicated Deputy Simms in the attack in the courtroom so it didn’t look as if Dwight was supposed to kill that particular deputy in court. However, the acting District Attorney hadn’t wanted to make a deal so Major Crimes were told to simply investigate Deputy Simms on their own to see if he was dirty as being claimed.

And sadly the deputy had been dirty. Deputy Simms had been accepting money from offshore accounts and had three burner phones hidden in his apartment. So not only was the deputy dirty but he was also the same deputy that oversaw Dwight’s therapy sessions with Dr. Joe and therefore he had been there while Dwight talked to Joe about a man named Jordan Graff. Jordan Graff was allegedly this Harvard graduate who could prove that the core curriculum in public schools was use to promote minorities over whites. So this Jordan guy had sounded like a leader in the Z-Brotherhood and Dwight had referred to him as being like a father to him.

Dwight’s real father was someone his mother claimed to have known for only a short time before he ditched her and Dwight and got himself killed fighting in Iraq. So Dwight’s mother had later painted this picture of having a raised son when she was too young and that he needed a father figure so he had turned to Jordan Graff. Though there had been something about Ms. Darnell that made the Captain believe she knew more than she was letting on and that might be part of the Z-Brotherhood herself.
Yet, unable to test her theories about the other woman, the captain, and her team had gone ahead with searching the area known as Nazi town and they came across the body of a missing clerk. The clerk’s name though had been Hai Sun. Hai Sun had apparently been Deputy Simms’s girlfriend and so the police had a reason to believe that she had helped him get his hands on Dwight’s gun. And that she might have been killed to keep the part she played quiet.

Only with Hai Sun, Deputy Simms, and Dwight all dead – it begs the question what the Z-Brotherhood had been so desperate to hide!