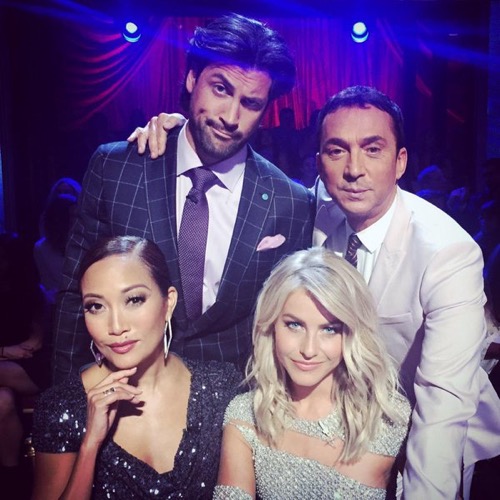 Dancing With The Stars 2016 spoilers tease that pro dancer Maksim Chmerkosvkiy will be returning to the ABC competition for Season 23 to partner with Amber Rose. Maks Chmerkovskiy retired from DWTS in 2014 after he won the Mirror Ball Trophy, however he returned to the show for the past two years as a guest judge.

ABC hasn’t made an official announcement on Maksim’s return, however a photo has been leaked of Chmerkovskiy with celeb dancer Amber Rose, and it looks like the unlikely duo may be partners when Season 23 premieres in September 2016. Entertainment Weekly’s inside sources have confirmed that Maksim has signed on for Season 23.

The official Season 23 cast will not be released until August 30 on Good Morning America, however ABC has unveiled the names of some of the pro dancers. The list includes: Witney Carson, Sasha Farber, Allison Holker, Sharna Burgess, Lindsay Arnold, Artem Chigvintsev, Gleb Savchenko, and Maks’ little brother Val Chmerkovskiy. It will definitely be exciting to see the Chmerkovskiy brothers competing on the dance floor again!

Dancing With The Stars fans are thrilled by the news of Maksim’s return to the ABC competition. Although Maks tended to bump heads with the judges and his fellow pro dancers, he has always been a fan favorite. Chmerkovskiy is also engaged to marry Season 22 champ Peta Murgatroyd, who is currently pregnant with their first child, her due date is set for some time in January 2017.

Although the official Dancing With The Stars Season 23 cast has not yet been released, it looks like Amber Rose and her partner Maksim won’t be the only controversial ones on the dance floor. Various reports have confirmed that Olympic swimmer Ryan Lochte is also signing on to compete on Season 23, despite his scandal in Rio.

So DWTS fans, are you as excited as we are to have Maks Chmerkovskiy back on the show? Do you think that he and Amber Rose could win Season 23? Share your thoughts in the comments below and don’t forget to check CDL for all of your Dancing With The Stars 2016 spoilers and news!