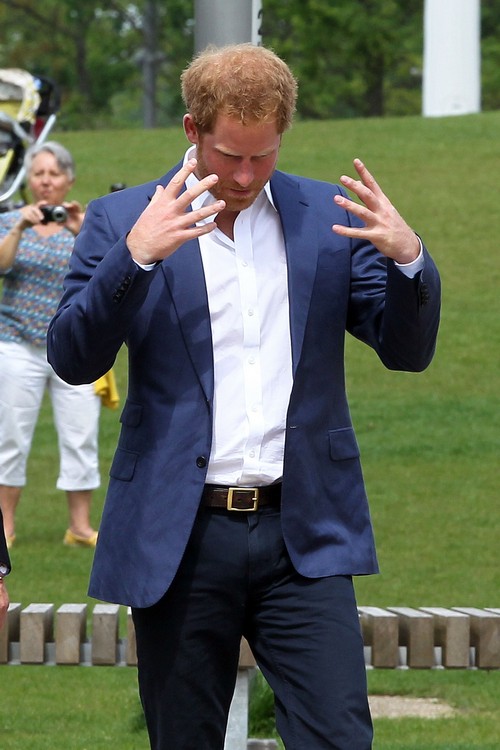 Margot Robbie is texting buddies with Prince Harry of Wales. Wait… what? It’s true – the Australian actress who plays fan-favorite Harley Quinn in the new Suicide Squad movie revealed to E News that she has a texting relationship with one of the world’s most eligible royal bachelors. The two met through Cara Delevingne, Margot Robbie’s Suicide Squad co-star who plays Enchantress, and enjoy keeping up with each other’s lives via text.

The royal and Margot Robbie’s friendship had a rocky start however. The two were at a housewarming party for Suki Waterhouse and when Margot Robbie ran into Prince Harry she didn’t know who he was – even mistaking him for singer Ed Sheeran! Margot laughs off her mistake during the interview saying, “He got really offended. He wasn’t wearing a crown though! Like, I don’t know it’s a prince!”

Is the texting relationship between Prince Harry and Margot Robbie strictly platonic or is there a possible romantic link between the two? Margot has been dating assistant director Tom Ackerley since 2014 and the two are rumored to be very much in love. The couple met on the set of the World War II drama Suite Francaise and have been going strong ever since.

Prince Harry, on the other hand, is rumored to be dating the recently divorced Greek heiress Athina Onassis according to the Australian magazine New Idea. The two have been friends for years and it appears that the prince is providing more than a shoulder to cry on after the heiress’s divorce from Alvaro de Miranda Neto.

But let’s face it, Margot Robbie is talented and drop-dead gorgeous and Harry has been known to have a thing for hot blondes, including his two most noteworthy long-term girlfriends Chelsy Davy and Cressida Bonas.

The idea of Harley Quinn being texting BFFs (and possibly more) with the Prince of Wales is deliciously entertaining. With her trademark blue and red sequin micro-shorts and propensity for bad behavior mixed with his stuffy formalwear and propensity for bad behavior, the two as a power couple would bring serious street cred to the Joker’s merry band of psychopaths. Though an intriguing idea to Suicide Squad fans, Queen Elizabeth would undoubtedly disapprove.

Do you think Margot Robbie and Prince Harry are just friends? Is the royal secretly dating Athina Onassis? Who is your favorite Suicide Squad character? How do you feel about Margot Robbie playing Harley Quinn? Let us know your thoughts below and come back to CDL for all your Royal news!

Prince Harry & sports stars discuss their struggles & support at a Heads Together BBQ. This is what they had to say.https://t.co/DX9suCtr8D