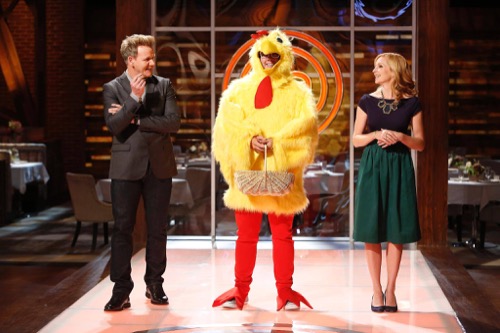 Tonight on FOX Gordon Ramsay’s Masterchef Junior continues with an all new two hour Friday January 8, season 4 episode 8 & 9 called “Hatching a Plan; Tag Team Time,” and we have your weekly recap below. On tonight’s episode, in the first half of a two-hour combined episode, the cooks compete in pairs to make the most deviled eggs in 12 minutes, and the winners are safe from the next elimination challenge, which involves making signature dishes from their future cookbooks. In the second hour, Christina Tosi’s mother is on hand for a mystery-box challenge featuring Christina’s favorite childhood foods; and a tag-team platter contest uses international street-food ingredients.

On the last episode, after a tough elimination challenge, the Top 12 junior home cooks faced their next task when the judges tested their senses in a blind taste challenge. Each contestant will blindly tasted a dish prepared by Gordon Ramsay and then had to recreate the dish. The contestant with the dish that best reflected Gordon’s dish received a significant advantage. In the next team challenge, the junior home cooks prepared VIP dishes for a dining room of all grandmothers for their first restaurant challenge. Each team created a unique dish of “new” ingredients and the team with the most votes were safe from elimination. Find out who will move on to the Top 10 and who will leave. Did you watch the last episode? If you missed it we have you covered with a full and detailed recap right here for you.

On tonight’s episode as per the Fox synopsis, “in the next team challenge, the junior home cooks will face an egg-cellent challenge and compete in pairs to see who can complete the most deviled eggs in 12 minutes. The team that perfects the most deviled eggs will be safe from the next elimination challenge, in which contestants must create their future cookbook’s signature dish. In the second hour, Christina Tosi brings a special guest into the MASTERCHEF kitchen, her mom, to present the next mystery box challenge, which will feature all of Christina’s favorite childhood foods. Then, contestants will compete in a tag team platter challenge using international street food ingredients.”

Don’t forget to join us for our live recap tonight at 8:00pm when Masterchef Junior season 4 episode 8 & 9 airs on Fox. While you wait for the recap, let us know how you are enjoying this season of MasterChef Junior.

Only the ten most talented junior home cooks remains on tonight’s all new episode of “Masterchef Junior”.

So the young contestants were prepared for anything, however no one had told them that Graham would come out in a chicken suit. And that was a sight to behold. Though the chicken suit did have another purpose. It was kind of clue for all those that would be competing in the first challenge.

Apparently the contestants were going to be making deviled eggs and not everyone was going to be cooking in the first challenge. Just four of them. Two for the Blue Team and two for the Red Team.

Fortunately, by time they got to nine, both teams had been filled up so Graham was saved from the final egg. But his part wasn’t over just yet. He later came back after he had cleaned up and it seems both he and Ramsay were part of tonight’s challenge. For not only were the Red and Blue teams competing but there was a going to be a Yellow team consisted of Gordon Ramsay and Graham Elliott.

That’s right! Two world renowned chefs were going up against two pair of kids. And that especially made said kids nervous but luck was on their side. They were allowed a head start and on top of that Ramsay and Elliott made quite a few blunders.

Therefore, they were lagging behind while everyone else was racing to finish their dish. And so when the time was called – Graham and Ramsay only had three deviled egg. Yet Zac and Kamilly who were on the red team – won – by completing ten perfect deviled eggs. Which Christina said was perfection in one bite.

And thanks to the effort they made, the Red team later found themselves safe from the second challenge. The judges you see had asked the contestants to create their own cookbooks and their challenge was to cook up a signature dish from their cookbooks. So it was a race to the cupboard and a race to finish.

But all that racing landed a few of them in hot water. Addison was cooking a signature pastries and she must have either overlooked or simply thought to speed up the process when she over-whipped her signature whip. And was forced to start over with only two minutes on the clock.

Though Adison caught a break and her pastry did turn out to be just as perfect as she wanted to be even if it wasn’t plated to Addison’s best capabilities. Now Kaitlyn who had lent Addison her extra heavy cream has saved the day for her friend but has messed several mistake of her own. Including to make a cupcake as her signature dish.

Avery had created the best of the bayou, Amaya had created a dish that was first given to her by her grandmother, and Kya had gone all French cuisine with a twist. So a cupcake was a bit of a letdown and it didn’t really describe Kaitlyn as a chef.

Ramsay had said the top ten was going to be tough yet no one really believed how tough it would be until Addison got points taken off for her dish and both Kaitlyn and JJ’s dishes were considered to be without character. And thus Corey didn’t really stand a chance when it was his dish’s turn to be judged. He had tried to create something that represented St. Thomas and what he wounded up with was an undercooked chicken and vegetables. Which could not be judged seeing as it could not be tasted.

So both Amaya and Avery’s dishes stood out amongst the rest, however Addison, Kaitlyn, and Corey were in the bottom three. And two people were to be sent home. Hence the judges were only going to ask person that was safe to step forward and they called Addison’s name.

Meaning tonight was the last night for Corey and Kaitlynn on “Masterchef Junior”.

And there were tearful goodbyes but there was also relief. Especially with young Addison. It had always been her dream to open up her own bakery and, after her close call, she said she would be fighting harder than ever to impress the judges. Though of course the judges couldn’t make it easy.

Christina’s mother was a guest star on the second part of tonight’s episode and it seems it had been left to Greta to come up with a worthy mystery box. Although, Greta managed to stump our contestants with her somewhat peculiar choices. It seems she put all of Christina’s favorite things, when Christina was a child, in the box.

And that meant there was cereal, candy, broccoli, chicken, and a whole bunch of other things that didn’t look like they would they good together. But that the contestants had to make go together. So they got to cooking and for the most part they all decided to make something sweet.

Yet Sam had a problem. He had finally gained confidence in his cooking and it turns out that his self-doubt was what was helping achieving such great dishes. Because without it, he set his dish on fire and flooded his station with smoke.

Ramsay naturally came to the rescue and put out the smoke. And Sam went on to complete his Chocolate Mousse with Strawberry Moue. Thus he found himself in the top three for tonight’s Mystery Box Challenge.

And joining Sam was Addison who made a Chocolate Rice Cereal Strawberry Tart. So she went the sweet route as well. And Zac who made a Pan Searched Chicken Breast with Broccoli and Potato Ganache. Therefore, there was something savory included.

However, Zac won the mystery box challenge with his savory dish and he decided to use his advantage over everyone else for evil. Like a superhero turned villain. And the judges made it worse by turning the final challenge into a Tag Team Challenge.

Everyone was to be split up into teams of two and Zac got to pick who would be on which team. So he made choices based on how much it would work against the other contestants. Like pairing Sam and Kamilly together when he knows they’re both shy. And would normally need strong leadership.

So what the judges had on their hands was pure chaos. There was screaming and mismanagement of time. And at one point Amaya had broken down into tears because it had gotten to be too much for her.

And yet they were all supposed to make the best of the best street food. Thus Addison didn’t have time for Amaya’s tears and she made her partner get it together. Which is how they were able to finish up their challenge in the lead.

Meanwhile Zac and Kya were the ones wounding up in the bottom. See, Zac had thought he had picked the perfect partner for tonight’s Tag Team Challenge and somehow things didn’t go as he planned. He and Kya left several things off their plate and they didn’t do what they did – well. So Graham was disappointed with them.

And another disappointment tonight was Sam and Kamilly. Their communication was atrocious and it showed in the food. Particularly with everything that was meat because that was all undercooked.

Now that’s four down and on tonight’s episode and only six remain!