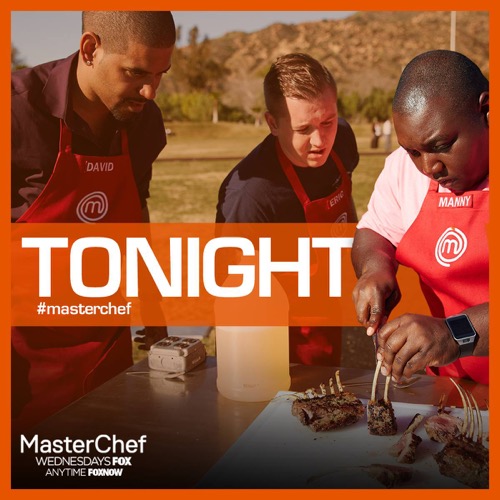 Tonight on FOX Masterchef returns with an all new Wednesday, June 22, Season 7 episode 4 called, “A MasterChef Wedding,”  and we’ve got your MasterChef recap down below! On tonight’s episode, the top 18 cooks split up into two teams to prepare appetizers and entrées for Season 6 contestant Nick Nappi, his bride, and their 72 wedding guests.

On the last episode, the remaining home cooks had to display culinary skills, as well as an immense passion for food and be determined to out-cook their rivals and make the next round. Did you watch the last episode? If you missed it, we recapped it right here for you.

On tonight’s episode per the FOX synopsis “in their first MASTERCHEF field challenge, the Top 18 home cooks are divided into two teams where they will have to prepare appetizers and entrees for a very special guest and member of the MASTERCHEF family, season 6 contestant Nick Nappi on his wedding day! Not only will they feel the pressure from Gordon Ramsay, Christina Tosi and a former contestant but also Nick’s bride and 72 hungry wedding guests. The winning team will earn a significant advantage in the next elimination challenge.”

Season Six Finalist Nick Nappi was back for an all-new episode of “MasterChef” and apparently he had wanted the Top 18 to cater his wedding day.

However, neither Nick nor his lovely fiancée pulled any punches when it came time for them to pick their protein. So for the first ever team challenge, the respective Blue and Red Teams were told that they had to cook scallops for appetizers and racks of lamb for the main course. And then the much harder part – picking teams. The Team Captains were Nathan and Terry yet there weren’t a lot of people that wanted to be on Nathan’s team. Nathan was a fresh faced twenty-year-old and not many thought he could handle the leadership role.

So when they actually did pick teams, a good portion of the contestants had tried to go over to Terry’s side. Yet, the judges had to be the one that burst their bubble when they said they couldn’t go into challenge with uneven numbers and therefore Terry had to decided who did he want on his team. Terry though had a wealth of options so he passed along the people he knew would cause him problems down the road. Like D’Andre who had a bit of problem with his self-esteem issue last week and also Shaun who he felt was too anal to properly follow anyone.

And it turns out Terry had a perfect point about Shaun. Shaun who had gone over to the Blue Team had quickly tried speaking over Nathan so that had let Nathan lose his temper. Though Nathan yelling at everyone, no one wanted to listen to him and to be frank Shaun used that to his advantage. So all of that led to the Blue Team being all over the place and the other contestants got so frustrated that they tried to hand the leadership over to Shaun. Who admittedly wasn’t doing that much better at the job.

Shaun had tried to put certain people on certain things and they ran into the same problem – Barbara. Barbara had been the catalyst that lost Nathan the leadership after she began to cook the scallops before the wedding ceremony even happened. Then later it was Barbara that ruined the vinaigrette. So Barbara’s little mistakes kept adding up and Nathan continued to run around arguing with everyone. But mostly with Shaun.

Yet, it wasn’t just the Blue Team that struggled to get through a dinner service. The Red Team was also experiencing problems, but not with leadership or one contestants set on self-destruction. The Red Team’s biggest problem was the wind. The wind was blowing away everything that they put on the table. So at one point it ruined an entire section of appetizers and Terry had been forced to adapt.

Terry then removed all tablecloths because Ramsay pointed out that the tablecloths was what was messing with the dishes. So the Red Team were able to pull themselves together however the Blue Team just never did. The Blue Team was late on several scallops because Alejandro undercooked several of them and no one stepped in take over. Although what really sunk the Blue Team was the fact that Nathan felt he had to yell to be heard and some took the yelling to be demeaning even if they didn’t necessarily listen to Nathan before he began to yell.

So the Blue Team ending up falling short with their appetizers because they couldn’t get theirs in before the speeches began and that left more than one dinner without any appetizers at al. However, they were given a chance to redeem themselves with the main course so they each decided to change up their tactics. Nathan finally calmed down and stopped yelling at people so all he had to do was occasionally check in. Only D’Andre didn’t liked being questioned over the Orzo though he would later burn the orzo and then desperately tried to save it by taking a few suggestions from Ramsay.

And although the Red Team started out strong, they began to fall apart during the main course. Their racks of lamb were coming out raw so Ramsay had to yell at the Red Team for the first time when he saw that no one had noticed that the meat was still raw before they tried to serve it. Yet, someone had noticed and in fact several people had had a conversation about the meat looking off. So they had known that the meat was wrong and simply hadn’t said anything because they didn’t want to slow down service.

But it did slow down service when Ramsay spotted the meat and it still took some time before Manny was able to recover on the meat station. So the Red Team lost their lead-in though they were able to recover and get their last dish out before the last time was called. And therefore it was understandable that they won tonight’s challenge. They worked as a team and did not falter when it came to feeding the many guests.

The Blue Team on the other hand never had a smooth service and that showed with most of their feedback from the wedding guests. There was more than one person that said the second dish saved the Blue Team. So it couldn’t have been entirely different story if the Blue Team had found their groove from the beginning instead of waiting at the last minute. Though as a reward for the people they felt did try to put forth their best effort, Christina and Ramsay decided to save four contestants on the Blue Team from elimination.

They saved Alejandro (who did recover nicely), Katie, Shaun and lastly Nathan (who was now Shaun’s best friend right off the bat. Later, though, the judges took another look at those remaining and they eventually worked their way to the bottom two who they felt the biggest mistake on their dinner service. Yet, it was pretty hard to choose between D’Andre and Barbara. D’Andre had a heart yet lacked on execution and Barbara tried to put cooked scallops in a warmer.

Although, what helped the judges decide between these two was a matter of faith. The judges apparently had a lot more faith in D’Andre than did in Barbara. So Barbara was the one that was sent home. And D’Andre had been given his second if not last chance on the show.