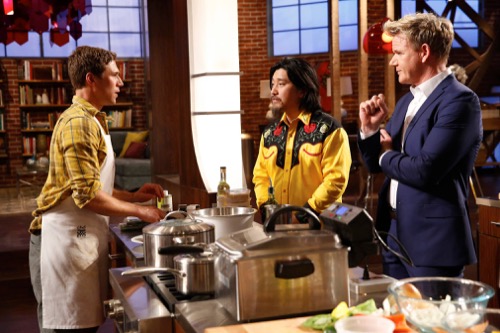 Tonight on FOX Masterchef returns with an all new Wednesday, July 27, Season 7 episode 9 called, “A Piece of Cake,” and  we’ve got your MasterChef recap down below! On tonight’s episode teens mark their sweet-16s with help from the 12 remaining cooks, who split up into two teams to prepare 30 dishes in one hour for the birthday boys and girls, who will vote on their favorite item.

On the last episode, the contestants were introduced to special culinary guest judge Edward Lee, chef and owner of 610 Magnolia in Louisville, KY, who revealed the third Mystery Box challenge. Contestants lifted their boxes only to find a $20 bill. Did you watch the last episode? If you missed it, we’ve got your MasterChef recap right here for you.

On tonight’s episode per the FOX synopsis, “the remaining 12 contestants are broken up into two teams to prep, cook and plate 30 dishes for teenagers celebrating their Sweet 16 birthdays. Each team receives a surprise box with 16 different ingredients and one protein.

They’ll have 60 minutes to prepare and present their dishes to the diners, who then will vote on their favorite dish. To kick off the challenge, judge Christina Tosi exhibits her signature three-layer cake for the contestants. Find out who bakes their way through the pressure and who melts down.”

Don’t forget to tune into our live MasterChef recap tonight at 8pm. In the meantime, sound out in the comments below and let us know how much you are enjoying this season.

After last week’s shocking double eliminations, it was safe to say that no one felt they were safe on tonight’s episode of “MatserChef” however a new team challenge meant they had to set aside their fears and come together in order to work as a team.

Chef Ramsay, Christina, and tonight’s special guest judge Chef Edward Lee had come up with the “Sweet Sixteen” Team Challenge. The “Sweet Sixteen” Team Challenge required the remaining contestants to split up into two teams where they would then prep, cook and plate 30 dishes for teenagers celebrating their Sweet 16 birthdays. So when it came time to pick the team leaders, the judges decided to use the eliminations challenge winners from last week so eventually Katie and Eric were both chosen as the respective leaders of the Red and Blue Team. However, Eric had been given one advantage over Katie.

Eric had apparently been given the opportunity to pick first so he later got the opportunity to pick from the final two who would be on his team and who would be on Katie’s because everyone else had been divvied up. So Eric ended up screwing Katie over because she truly didn’t want to have Nathan on her team. Katie had thought that Nathan would slow her down and constantly needed to have his hand held so she didn’t want him yet she got him anyways thanks to Eric’s decision. But Katie had tried to overcome that initial setback by giving Nathan the simplest tasks on the team. She had Nathan cut up tomatoes and even took his suggestion that he should be on peas. And somehow he managed to drag her team down.

Though the Blue Team’s mismanagement couldn’t all be Nathan’s fault. Nathan had constantly needed help with things like cutting up tomatoes so he was always asking Katie for help or getting an attitude with her because he said she was treating him like a child, but besides Nathan’s interference, there was also the menu that seemed to be holding the team back. Chef Ramsay had stopped by their station and he had told them that they had Asian inspired there, Mexican-inspired there, as well as several other influences. So he hadn’t been sure how it all tied together and for that matter neither did anyone else because Katie had her team making a marinade that was basically salsa that they were calling Asian infused.

The Red Team, on the other hand, was also having problems. Eric had his team focusing on the vegetables and not much anything else. So they had been ignoring their protein and had nearly served a room full of teenagers that had missed out on having a Sweet Sixteen for themselves a piece of chicken. Yet, after Ramsay screamed at them, they had thankfully gotten their act together and were able to deliver better service which couldn’t be said of the Blue Team. The Blue Team served Grilled Shrimp with Coconut Rice, Sugar Snap Peas, and Chili-Lime Sauce and towards the end, they hadn’t been able to plate the dishes the way they would have liked so that had made some of them testy.

Nathan and Andrea who were both the youngest there had gotten into a short hitting match where they basically fought like kids. So the judges actually had to tell them to stop that. However, the Red Team’s Pan Seared Chicken with Candied Bacon, Sweet Potato Mash, and Balsamic Glaze wasn’t enough to sway the room full of kids so the Blue Team ended up winnings this round despite many failings tonight. And so it was the Red Team that had to cook in tonight’s Pressure Test although the test admittedly taken some out of their comfort zone.

Tonight’s Pressure Test was a bake off. The Red Team were told that they each had to make a layered cake that they also had to decorate. So that had pushed some outside of their cooking limits because guys like Alejandro and Shaun didn’t do a lot of baking in their time so the Pressure Test ended up showing off their greatest weakness. But unlike Shaun who had gone on to actually give up on himself for a few minutes after he realized his frosting kept slipping off his cake, Alejandro had still kept trying throughout the entire test to perfect his cake and had even gone too far in what he was trying to do.

Alejandro, it seems hadn’t known when to take his cake out of the oven so he ended up overcooking them when he tried to play it safe. Meanwhile, Shaun, like it was stated before, had given up towards the end of the challenge. Though at the last minute he had returned to it and had tried to salvage what he could. So once he stopped panicking, Shaun was able to pull his cake together and delivered a very stunning sponge cake that wasn’t lacking in taste. And so his cake ended up coming out on top compared to everyone else’s.

Terry had also shown outstanding effort with his cake so he had showed pretty good effort as well, but Terry’s layers hadn’t been evenly cooked. So that counted against him while Tannoria on the other hand, had had a cake that was just too sweet. Yet, that hadn’t compared to what Dan did. Dan had made a great cake and had then messed it up by calling it nautical simply because he had put an anchor design on it. And you know what that told the judges? That told the judges that Dan still wasn’t acting serious enough for the competition.

But what saved Dan, Terry, and even Tannoria after Shaun’s cake won out was the fact that Eric’s and Alejandro’s cakes had been the worst of the night. So it was with a heavy heart that the judges ended up eliminating Alejandro from the competition. Alejandro had been a force to reckon all throughout the MasterChef however baking was merely not his forte. And so it cost him the MasterChef apron.