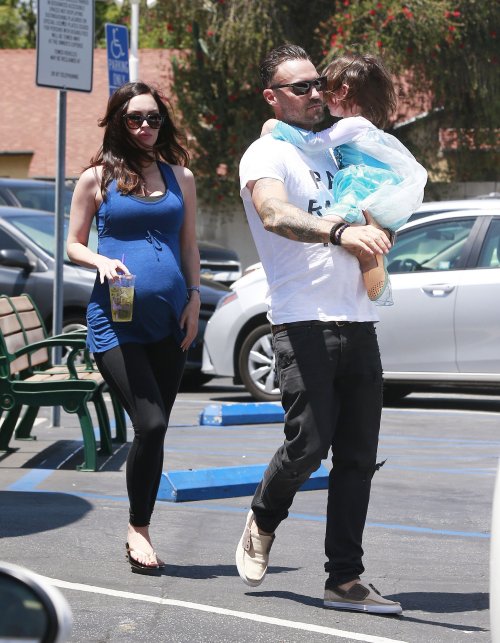 Looks like Megan Fox has changed her mind and called off her divorce with Brian Austin Green. Is the formal reconciliation all about baby #3? Did their surprise (and unplanned) pregnancy save their marriage?

Although Megan and Brian remained living together after they announced their split, the Transformers and Ninja Turtles actress made it clear the divorce was happening and she filed divorce papers in August 2015.

A month later, Brian Austin Green responded by requesting spousal support and joint custody of their kids Noah (3) and Bodhi (2). Since Megan is the breadwinner, the divorce meant lots of money changing hands.

Plus, Brian Austin Green suffers from intense vertigo and can’t work as much as he used to, so Megan would be supporting him either way – divorce or not. The split seemed amicable and Megan Fox and Brian were often seen out and about with their kids.

But things were obviously still cozy in private as well since she ended up pregnant and ended speculation that she might have been hooking up with one of her Teenage Mutant Ninja Turtles co-stars by confirming that Brian Austin Green is the father of her third child.

A source told PEOPLE magazine that Brian had “always hoped Megan would change her mind about the divorce” and that he’s thrilled she called off their split. The source also said that Megan and Brian “worked hard to figure out their marriage.”

It looks like this new baby may have helped seal the deal to reunite the Green family. In late May, Megan Fox and Brian Austin Green were seen looking cozy on the beach in Hawaii and now it turns out they have completely rekindled their romance and the marriage is back in good shape.

Megan told pals that she and Brian are back on, excited about expanding their family, and are just waiting for baby number three. Although things had seemed positive in the past few weeks, there was no official word about the status of the divorce.

PEOPLE also revealed from the source close to the couple that last month’s Hawaii “parent’s only” trip was intended for Brian and Megan to really think things through about their marriage, before their third child was born, and to decide once and for all what to do.

In the end, said the source, Brian Austin Green and Megan Fox “don’t want their kids to grow up in a broken home.” Looks like that’s not a worry – at least for now – so long as the reconciliation sticks. Was Megan’s surprise pregnancy the shock it took to make them decide to work things out once and for all?

What do you think? Check out the pics below of Brian Austin Green and Megan Fox out shopping with their kids on Friday, July 1 with Megan looking ready to pop and Brian playing proud daddy to their two kids.