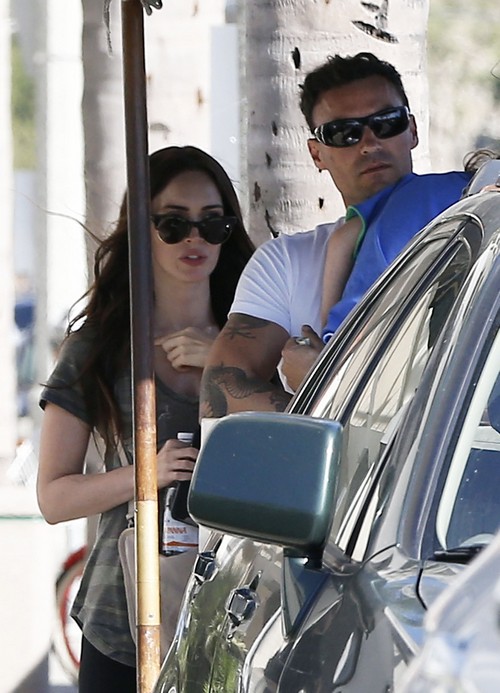 Megan Fox is pregnant with baby number three – the actress stepped out with a major baby bump at CinemaCon in Las Vegas this week. Fox arrived on her co-star Will Arnett’s arm, the two actors were promoting their new movie, “Teenage Mutant Ninja Turtles: Out Of The Shadows.”

Despite all of the shocked fans, Megan Fox did not address her pregnancy – and acted as if there wasn’t a tiny human growing in her belly.

Megan Fox already has two children with husband Brian Austin Green, their sons Noah and Bodhi. However, word on the Internet is that Megan’s third child may not be Brian’s – and that would explain her reluctance to discuss the pregnancy.

Megan Fox an Brian Austin Green announced in August 2015 that they were filing for divorce. However, their separation has proven to be a messy one legally speaking, because Brian plans to file for spousal support – the actor claims he can’t work and support himself after injuries he sustained in a car accident a few years ago.

Since Megan Fox and Brian Austin Green announced their initial break-up, details have been few and are between on their split. Some outlets have implied that Megan and Brian have called off the divorce – and if she is pregnant with their third child, that would explain why they are trying to work things out amicably.

However, there is also the chance that Fox has been seeing someone new, seeing as how she and Brian were pretty adamant their marriage was over last year, and the unborn baby might not even be his.

Megan Fox has always been rather private when it comes to her family and relationship with Brian – so we may never know who the father is of her child. What do you guys think? Is Brian going to be a dad again?

Or is Megan seeing someone new and having a child with him? Share your thoughts in the comments below!