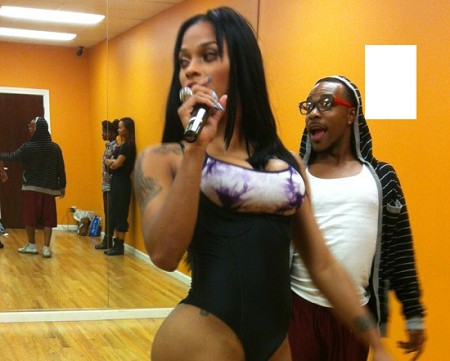 Love & Hip Hop Atlanta star Joseline Hernandez is pregnant! Joseline and her Love & Hip Hop co-star Stevie J. are reportedly expecting their first baby together…again. Or still? Ironically, in 2014 Stevie J. announced in an interview that his “wife” Joseline was pregnant, but we never heard anything else about the baby – or if there ever was a baby.

Now, Joseline Hernandez is announcing that she is pregnant again. On Tuesday September 22 Joseline took to Facebook and shared this message with her Love & Hip Hop Atlanta fans, “I officially want to announce that I am expecting. #ProudMOmmyToBe #TheJordans.” Some of Joseline’s fans flooded her Facebook page with well wishes and congratulations, but the majority of the internet was suspicious. It’s kind of like the girl who cried wolf. How many times are Joseline and Stevie going to say there is a baby on the way and imply that they are pregnant – before we all stop believing them?

Of course, Joseline and Stevie J. reportedly are filming their own Love & Hip Hop spinoff reality TV show for VH1 as we speak. So, there is a very real chance that this is some sort of publicity stunt to get people to tune in to the new show. One thing is for sure, if this baby turns out to be another “scare” or late period – Joseline and Stevie are losing any tiny shred of credibility that they have left.

What do you think Love & Hip Hop fans? Is Joseline Hernandez really pregnant this time, or is this just another publicity stunt, or desperate cry for attention? Will you be tuning in to watch Joseline and Stevie J.’s own reality TV show, or do you think that it will turn out to be a huge flop? Let us know what you think in the comments below!