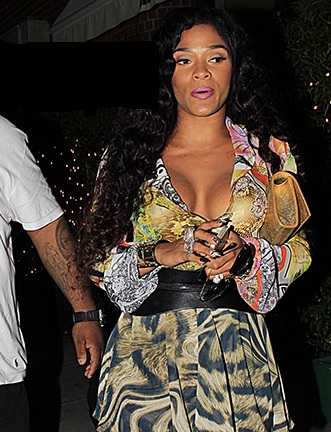 Love & Hip Hop Atlanta fans are still buzzing about the brawl that Stevie J and Joseline Hernandez started on the set of the LHHA reunion show. Since the episode aired on VH1 multiple reports have emerged revealing that Stevie J and Joseline Hernandez’s behavior on the reunion show was a results of their drug problems, and in a lawsuit filed after the brawl it is noted that Joseline was smoking crack backstage before the Love & Hip Hop fight. Multiple sites are reporting that the self-proclaimed power couple’s addictions are so severe that they have drained their bank accounts feeding their drug habits and were even evicted from their Atlanta mansion.

It’s becoming pretty clear that Joseline and Stevie J can’t even take care of themselves, but according to new reports they are going to have a third mouth to feed. Joseline Hernandez is pregnant with Stevie J’s baby! We wish we were kidding, but recent reports (MTO) reveal that Joseline was spotted out and about with a baby bump and Stevie J has hired her a body-guard to protect little “Stebbie Jr.” For those of you who don’t remember, this isn’t technically Stevie and Joseline’s first child, she admitted to being pregnant in 2012 and having an abortion.

According to Love & Hip Hop Atlanta spoilers, Stevie J and Joseline are rumored to be leaving LHHA and starring in their own spin-off show (much like Jim Jones and Chrissy did after leaving Love & Hip Hop). If Joseline Hernandez is pregnant, then that would explain why VH1 is willing to give them their own series to star in. Joseline and Stevie are already a hot mess, but a hot mess with a baby on the way, that’s good reality TV!

So LHHA fans, what do you think about Joseline and Stevie J bringing a baby in to the world? Do you believe that she is really pregnant? Will you be tuning in to the “Stevie And Joseline Show?” Let us know what you think in the comments below!