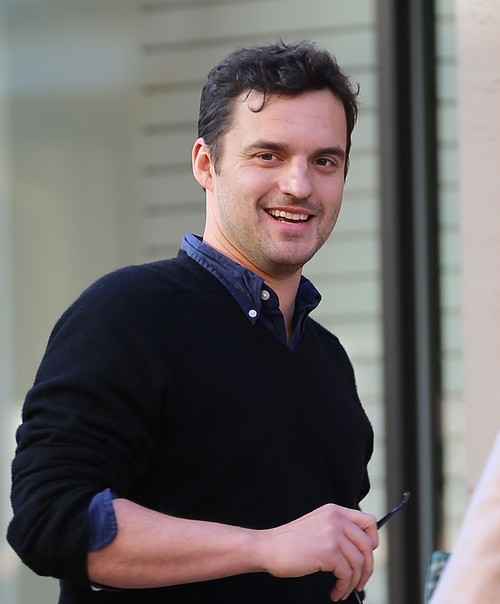 Megan Fox was seen locking lips with ‘New Girl’ star Jake Johnson as she fills in during Zooey Deschanel’s maternity leave. The newly single Fox has tongues wagging as the chemistry between the “New Girl” stars is so hot, they’re almost obligated to take it off-screen.

Megan Fox is set to make her “New Girl” debut on January 5 and will continue to guest star while Zooey Deschanel is out on maternity leave. As far as the story line for the hit Fox comedy, Megan’s character will be temporarily moving in while Deschanel’s Jess Day is sequestered on a jury.

The “New Girl” hook up session was recently filmed with Johnson and Fox for an upcoming episode and the two stars were looking like they really got into it. After the scene as Fox walked off set, Jake Johnson was seen with a pouty look on his face. He clearly didn’t want Megan to go.

Is there a real-life romance building between Johnson and Fox on set? Megan Fox just filed for divorce from Brian Austin Green back in August and the “Teenage Mutant Ninja Turtles” actress looks ready to move on with another man. It has already been noticed that Megan is working a lot more in the wake of her divorce and some think Green was holding his superstar ex-wife back.

Megan has made quite an impact on more than just one cast member too. Another “New Girl” co-star spoke recently about how well Megan Fox fits in on the comedy and it wouldn’t be surprising if Fox stays on to make more episodes, especially if the ratings jump on the episodes where Megan’s character appears.

Max Greenfield plays Schmidt on the show. Recently Max spoke about Megan joining the cast and said, “We’ve been having so much fun. She’s very funny – I’m excited for people to see how funny she is.” Max went on “She’s been really good in these episodes. We’ve all really gotten along. She kind of fit in seamlessly. She’s done like four so far, and it’s been really nice. We have a really good time.”

Will Megan take her on-screen romance with Johnson’s Nick Miller spill over into a personal affair? We’re pretty sure Jake’s wife of almost a decade hopes that doesn’t happen. Jake Johnson has been married to artist Erin Payne since 2006 so he’s officially off the market. That said, this is Hollywood and on-screen chemistry often leads to much more, regardless of commitments to other people.