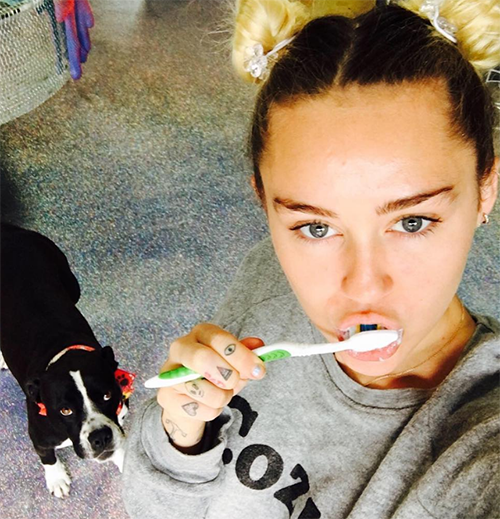 Could Miley Cyrus be destroying Liam Hemsworth’s family members? That’s what both fans and critics alike can’t help but wonder, as there is a new report that says the chart topper has been telling friends that Chris Hemsworth is cheating on his wife, actress Elsa Pataky.

Surely, Miley Cyrus isn’t very popular right now with the Hemsworth family. The singer has been in an on-again, off-again relationship with Liam Hemsworth. Their romance has had Liam’s parents concerned now for years, as the singer is no stranger to controversy. And, now, it looks like Miley might end up being blacklisted by the Hemsworth family altogether. She’s singlehandedly trying to destroy Chris Hemsworth and Elsa Pataky’s marriage.

According to Star Magazine, Miley’s loose lips have been spreading rumors about Chris’ possibly extra-marital affairs. Apparently, the singer had one too many drinks during a night out with the Hemsworth brothers and told a group of friends that Chris was supposedly seeing other women behind Elsa’s back. One source even dished to the publication, “Liam tried to shut her up, but the damage was done,” while Miley allegedly told Elsa, “Whatever, all men cheat. It’s just something you need to accept, Elsa.”

Knowing how unfiltered and “real” Miley likes to be, especially when it comes to men, romance, and her own sexuality, it wouldn’t surprise anyone if Miley did indeed humiliate Chris by telling everyone that he’s cheating on Elsa Pataky behind her back.

Considering how young and expressive she is, Miley thinks it’s ok to do whatever she pleases or say whatever she wants without consequence. Miley might think that everyone cheats in relationships, but she doesn’t realize how her remarks might end up destroying a family with three young children, like Chris and Elsa’s.

But then again, Miley and Liam have broken up and gotten together so many times that the singer probably realizes that she’s walking a very fine line with him and can’t afford to mess up, especially in front of his family. Liam Hemsworth could very well cut the cord from their relationship permanently, especially if she continues to talk about his brother’s personal affairs.

Miley Cyrus has worked so hard to prove to Liam that she’s changed and shed her trashy on-stage persona so talking about Chris Hemsworth’s cheating might be the straw that breaks the camel’s back, and that’s not what she wants. What do you think, CDL readers?

Thanks for watching @nbcthevoice!! Tune in again next Monday and Tuesday for more #blindauditions ❤️💜💙💚💛 #turnupteammiley

Thanks for watching @nbcthevoice!! Tune in again next Monday and Tuesday for more #blindauditions ❤️💜💙💚💛 #turnupteammiley