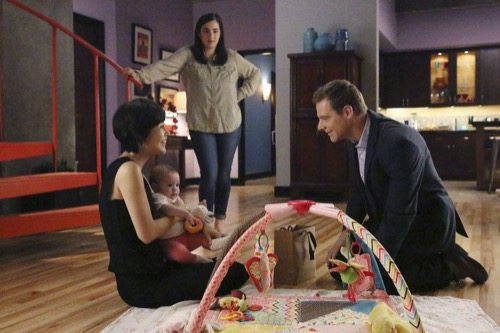 Tonight on ABC their new drama MISTRESSES continues with an all new Monday, August 22, season 4 episode 10 called, “Confrontations,” and we’ve got your Mistresses recap down below! On tonight’s show Marc (Rob Mayes) focuses on his music and bonds with Sofia. (Hilty Bowen)

On the last episode, April’s mom caused trouble in April and Marc’s relationship. Did you watch the last episode? If you missed it, we have a full and detailed Mistresses recap right here for you.

On tonight’s show per the ABC synopsis, “Marc focuses on his music and bonds with Sofia. Meanwhile, Lydia tries to ruin Karen’s new romance; April makes a decision after observing her mother’s display of intolerance and Joss deals with the death of a friend from her impact class.”

Harry and Joss are still having a silent war. Harry wants to talk about Joss’ issues, but she doesn’t want to. She has clearly been taking too many of her pills because when she gets up to leave, she gets dizzy.
April’s mother is still living with her and Marc isn’t. He is supposed to come and get the rest of his things. April’s mother thinks that when he comes over, April needs to leave.

Joss is spending time with Kim, who tells her she will need to go and seen a doctor if she wants anxiety meds. Kim doesn’t prescribe anything for friends. When Kim turns her back, Joss steals a sheet from her prescription pad.

Marc comes to April’s and gets the rest of his things. The two don’t talk, but their emotions are clear. Marc gives her his keys and leaves.

Harry is nervous about his IRS woes while Marc is complaining about sleeping on a futon and his lack of success.

Back at April’s store, her mother is back at it hounding her about food, Marc and a financial wiz by the name of Michael. When April’s mom learns he is transgender she goes on a very loud, public rant until April shuts her down.

At the gym, Joss is scared about talking to the police about Marseille.

Adam wants to take Kim back to his place, but Lidia isn’t willing to stay and watch the baby.
Joss and April bond, talking about Harry, the police, and Marc. When Joss goes home, Harry picks up on her slurring.

April finally takes Joss’ advice and tries to stand her ground with her mother, who insults her decisions and the men she brings into Lucy’s life.

Marc gives the band a pep talk, but they don’t seem t share in his enthusiasm. His female band mate believes in him though, she kisses him on the cheek. Is something going to happen?

April is still trying to wrap her head around her issues with her mom. At the store, she talks to her friends and finally begins to feel a little better.

After Kim’s date came to an early end, Lidia and her discuss the night’s event. Kim asks Lidia how her night went, learning that there was no date. Lidia was just tired. This doesn’t sit well with Kim, who males her employment wishes clear.

Lidia tells Kim that she has a hard time meeting people and was jealous. Judging by Kim’s facial expressions, she is starting to see a new side to Lidia.

April makes plans for her mother to stay somewhere else until she gets healthy. Telling her mother the news brings them both to tears.

Jackie is back at it again, making Joss feel bad about her decision. She calls her at night to tell her that the bail on the case has been dropped low.

Adam comes to Kim’s for dinner. When the two retreat to her bedroom for an appetizer, Lidia comes back to get her phone and overhears the two.

Meanwhile, Marc and Sofia share a kiss at the close of the show while Harry finds Joss’ stash of pills!