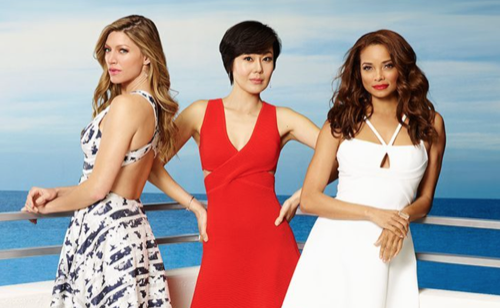 Tonight on ABC their new drama MISTRESSES continues with an all new Monday, August 15, season 4 episode 9 called, “The Root of All Evil,” and we’ve got your Mistresses recap down below! On tonight’s show April’s mom causes trouble in April (Rochelle Aytes) and Marc’s (Rob Mayes) relationship.

On the last episode, custody issues arose regarding Vivian. Meanwhile, April discussed a mature topic with Lucy; Kate kept her new beau a secret from Joss and Harry. Did you watch the last episode? If you missed it, we have a full and detailed Mistresses recap right here for you.

On tonight’s show per the ABC synopsis, “April’s mom causes trouble in April and Marc’s relationship. Meanwhile, Karen meets a new guy after Lydia secretly sets up an online dating profile for her; Kate makes a change in her living arrangements; and Joss takes pills to cope with her anxiety.”

Season 4 Episode 9 “The Root of all Evil”

Too eighties, too frat guy. Harold is having his closet cleaned out and he isn’t happy. Harold’s sister is ready to move out. She has made up her mind and doesn’t want to talk about it, even of she has become close to Jess

Harold tells Jessica that Kate is acting strange. Jessica seems surprised, making an excuse for Kate, saying she is stressed out. Jessica tells him she will try and find out the real story. Stressed, she hits her secret stash of pills after Harold leaves.

Marjorie announces at lunch that she plans on staying for 6 months. Marc cannot believe the news. He looks like he wants to die. Marjorie’s offer to pay the mortgage is clearly not excited over the money.

Jessica and Kate have a very unfriendly run in. There is now way that Kate is staying and that Jessica wants her to. Afterall, it’s clear that Kate has plenty of dirt on Jessica. Why would she want her around?

Stacey isn’t willing to deal with her modeling shoot and would rather take her MMA classes! She’s sporting a huge bruise on her side, but could care less. She’s feeling empowered.

Lidia admits to Karen that she has been chatting to some single guys online. Lidia’s plan works because Kim reminds her that she has spin class tomorrow, a class Lidia secretly set up.

At spin class, Kim is grinding away when an interested suitor next to her gives her the eye.

Marc tags along with Harold on his shopping spree. Marc explains that he cannot handle April’s mom. He thinks Marjorie is trying to get rid of him by moving in. They disagree and Marc takes off angry.

Harold shows up at Marc’s with food and an apology. Marc apologizes too. He’s feeling insecure about his money problems.

Kim tells Jessica and April about the spinner suitor and that Jacob got married. The tell her to go for it. Date the hot guy. Jessica also shares her recent dilemmas with the girls. Sharing that Kate is sleeping with her ex Scott, a guy who still likes Jessica, and tried to kiss her. The news floors Kim and April.

Kate admits to Randy that she slept with Scott. The news also makes his head spin, causing him to drop a vase. The two run!

April and Marjorie are at the doctors. He wants to slow down the damage to Marjorie’s liver, forbidding her to drink. She agrees that drinking is off limits. They discuss the possibility of a liver transplant, something that the doctor says isn’t a promising option.

Lidia is still at it, talking to Adam on Heart Duet. She almost gets caught by Karen who comes home early.

Harry comes home to a bewildered and flustered Kate. When he begins to question her about moving out and about Jessica, kate freaks out and walks away.

April wants Marc to take her mother’s money. She feels bad of they don’t while Marc wants April to ask her to leave. April doesn’t want to leave her mom alone. She points out that they also need money now that they are living on one income. Marc seems to only be offended, twisting April’s words.

Harry comes in unexpectedly while Jessica is trying to get more of her pills out of her secret spot. They kiss and she has to find a creative way to get rid of the pills.

Kate tries to call Scott, but hangs up. She feels stupid and doesn’t want any one feeling sad for her, especially Harry.

Marc tells April that he needs to move out temporary. April gives Marc an ultimatum. He’s out!

Harry tells Kate that he was out of line about discussing her finances. Kate says that she wants to move back to Australia. Harry gets Kate to sit down and begs her to tell him what is going on. Kate confesses that she was seeing Scott. Harry gets so angry, he leaves the room.

Marjorie comes outside to see a crying April. She doesn’t want to talk to her mom about it.

Karen arrives home to see Lidia playing on the floor. The door knocks behind her, its Adam. Lidia looks nervous.

Harry confronts Jessica about her lying to him again. Her phone goes off and she leaves without looking back. Jess walks in to a vigil for Marseille. She has died.