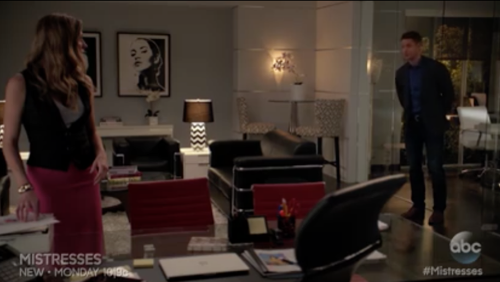 Tonight on ABC their new drama MISTRESSES continues with an all new Monday, August 8, season 4 episode 8 called, “Bridge Over Troubled Water,” and we’ve got your Mistresses recap down below! On tonight’s show, April’s (Rochelle Aytes) mom arrives for an overnight stay, but she extends her visit due to health issues.

On the last episode, custody issues arose regarding Vivian. Meanwhile, April discussed a mature topic with Lucy. Did you watch the last episode? If you missed it, we have a full and detailed Mistresses recap right here for you.

On tonight’s show per the ABC synopsis, “April’s mom arrives for an overnight stay, but she extends her visit due to health issues. Meanwhile, despite her misgivings, Karen makes an effort to bond with her new nanny; Harry deals with his sudden fame and Joss learns that Kate is dating Scott.”

Lucy is fine! That phone call that April received on last week’s episode “Mistresses” had thankfully not been about her daughter however it had been about her mother Marjorie and how her mother had broken her wrist because she had again been involved in a car accident. So Marjorie was going to be ok as well. But she had been told to take it easy and so she decided that she was going to recuperate at April’s place. At least until her doctor gave her the all-clear and she could return home when its safe.

So Marjorie had been perfectly accepting with that arrangement because she knew that she was going to be receiving the best treatment at her daughter’s who naturally wouldn’t mind running after her. However, April and Marc for that matter had dreaded having Marjorie over because of her condition. Marjorie was an alcoholic and unfortunately she refused to accept that she was. Marjorie believed that she didn’t have a problem with drinking and so purposely went out of her to chastise April whenever her daughter tried to talk to her about it. And yet Marjorie for some unexplainable reason had a problem with Marc.

Marc has been a supportive member of April and Lucy’s family and he too was an alcoholic. Yet, Marc was willing to admit that about himself while Marjorie wasn’t so she had used his drinking as another reason to constantly put him down. So there was apparently nothing off limits with Marjorie as she tried to find several ways to remind Marc that he could never be part of her family though funnily enough he and April had both been there for her after she had gotten some unexpected news from the doctor. It seems a blood test had showed that Marjorie was seriously ill and would need a liver transplant.

Though a liver transplant required several things such as sobriety and healthy living. So Marjorie was basically told that she was going to die without that transplant and that she wouldn’t be given a liver unless she quit drinking however Marjorie had downplayed her condition to the doctor. She had told him that she only ever had the occasional drink so he thought that she had about two glasses a week rather than her normal two bottles day. But even with that hanging over her head, Marjorie had still been found by Marc afterwards and she had clearly been hungover.

Marjorie, therefore, was never going to change. Yet, April still had to try so she had looked at rehabilitation centers and had found one that she knew would be perfect for her mother. Marjorie though had manipulated April because she said that she could beat this thing by staying with her and Lucy. So Marjorie had convinced April that she was finally ready to get help and that she should stay on at the house yet the truth was that she still didn’t think she had a problem. And was just stringing April along until she could get rid of Marc who she thought was the real problem.

Marc had after all found her bottles last time and he was the one that found her nearly passed out after her doctor’s appointment. So Marjorie got into her head that if Marc wasn’t around then her daughter wouldn’t know that she had been drinking. However, April couldn’t see what her mother was doing because she had wanted to believe her mom was ready to accept help. So that allowed April to do things with her friends like she normally would have. And she was out spying on Karen’s name while her mother was at home issuing threats.

Though to be fair, there was something off about Karen’s new nanny. The young woman had given Karen a certain vibe and so Karen had felt like she couldn’t trust her. But once April had seen how well the new nanny was working out because she cleans and takes over the baby, she told Karen to calm down. She said that it was natural to be a little jealous and that Karen was frankly going to have to get over it. So Karen had warmed up to the other woman by the end of the episode because she had stopped worrying about her daughter growing more attention to the nanny than she was to her mom although it seems that she had been right about her nanny.

The younger woman was making online profiles with Karen’s pictures. So be prepared because there will be a crazy nanny episode. Yet, Harry and Joss’s relationship looks like it will implode long before that nanny episode ever appears. Harry has gotten accustomed to enjoying his time in the spotlight what with the new fame and the extra money so he doesn’t what Joss to constantly rain on his parade. Especially as she appears to be doing out of spite because he didn’t back her up with Jonathan’s nephew.

So lately there has been nothing that Harry has done that she approves of and they’re frequent fighting was just one of the reasons why Joss took her client’s pharmaceutical. Joss apparently had to apprehend them after her client went on a twitter rampage so that PR disaster from that plus the fighting with Harry as well as Scott making an appearance had all contributed to Joss taking drugs. But that thing with Scott had repercussions. Scott had heard from Kate that Joss was fighting with Harry so he had tried to get back together with Joss because he’s still in love with her and had simply been using Kate as a substitute.

Don’t know why he thought admitting that last part would be romantic, but he did and Joss had of course been disgusted with him. So Joss had followed up that unfortunate conversation by going to Kate and trying to tell her that what she has with Scott wasn’t real however the other woman refused to hear it and thought Joss a hypocrite for trying to end her relationship. Which she assures Joss was real!