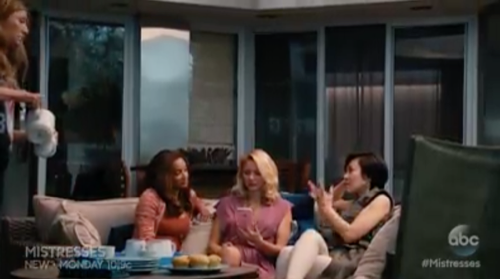 Tonight on ABC their new drama Mistresses continues with an all new Monday, June 20, season 4 episode 3 called, “Under Pressure,” and we’ve got your Mistresses recap down below! On tonight’s show Kate (Tabrett Bethell) struggles with dating in Los Angeles. Meanwhile, Harry (Brett Tucker) explores a promising new job venture.

On the last Mistresses recap, Harry’s sister arrived for a visit and reveals that all was not well between her and her fiancé. Did you watch the last episode? If you missed it, we have your full and detailed recap right here.

On tonight’s show per the ABC synopsis, “Kate struggles with dating in Los Angeles. Meanwhile, Harry explores a promising new job venture; Marc helps April discover her true calling; the boundaries between Karen and Robert begin to blur; and the impact of the past year weighs on Joss.”

Tonight’s episode is going to be an exciting one filled with drama that you won’t want to miss – the producers know they need to get you interested, therefore you can expect a great show. Be sure to tune in for our live coverage of ABC’s Mistresses recap tonight at 10 PM EST!

Kate was new to town so the other ladies thought it was time that she go back out there and meet new people on tonight’s episode of “Mistresses”. However, Kate wasn’t used to the whole dating thing because she had only ever been with one person and she had almost married him. So Joss, April, and Karen had introduced Kate to the app Shaggr. Shaggr was a dating/hookup app and it was the best way for Kate to get her feet wet again. What if the different types of guys she gets to choose form.

Yet, dating again was a little too much for Kate. She had used the app to set up three dates with guys that she thought she would have a great time with however only one of the dates panned out. There was one guy that just lived to compare Kate to everyone he has ever dated and another that wrote sex manuals for a living. So when the last guy didn’t want to judge her and instead asked her about herself, Kate had thought he was perfect.

Some could say that she had thought he was a little too perfect. Not long after her first date with Dean, Kate had gone running to Joss and had told her future sister-in-law that she thought Dean could be the one. As in the one that she might one day marry. So Joss was left in an awkward position because she knew that Kate was getting ahead of herself, but also she knew that she had to find a way to get Kate to reconsider. Or risk Kate the second man she had ever dated.

Karen on the other hand didn’t know what to do about her own situation with Robert. Karen and her friends had found Robert on the dating app when they were looking for Kate so she knew that he was still on the market though she didn’t know how she was supposed to feel about it seeing as they’ve recently begun to sleep together. Though Robert had quickly taken down his profile on Shaggr because he thought that doing that would be respectful seeing as he was now with Karen.

So Karen was trying to figure out what her relationship with Robert was. She thought that they were having fun and had actually decided that it was just going be for fun when she saw his profile yet everything changed after he took that profile down. However, Karen did not stop sleeping with Robert while she was confused and their little “thing” began to blend in with their everyday lives. He would give her a report on Vivienne in bed and she couldn’t exactly couldn’t say that they couldn’t’ take part about the other part to their relationship.

But Kate had later gone to Joss and she had asked that Joss meet Dean for herself. Kate had said that she had talked things through with Dean and that he couldn’t wait to meet her friends because he was ready to settle down. So Joss had felt like Dean had merely said anything he could to get into Kate’s pants, but that also could have been the aggression talking. Joss had become a lot more aggressive lately and again she was refusing to go through therapy.

Joss had recently given up her extreme self-defense classes because she hadn’t recovered from one of her bruises and Harry who saw it had asked her to stop for a while though Joss was becoming a lot more aggressive without those classes. She had gotten into a huge fight with biker that she almost hit and was still wound up afterwards that Karen had to give her a drink. Yet, when Karen also tried to bring up therapy, Joss came up with a story that fit her narrative.

She said that she was taking some minor self-defense classes and that Harry had overreacted to one of her bruises. So she was completely ignoring the part where her doctor told one more hit to her side would result in a broken rib and mentioned that there was a difference between self-defense and self-destruction. And so Joss had only told Karen part of the story in order to get Karen’s full approval on her classes.

Joss had gotten upset with Kate and Kate had gotten upset with her. Though Joss had been the one to take their argument one step further when she ditched Kate at the club and drove back home by herself. So Joss had again lost her temper with someone, but she hadn’t seen anything wrong with her own behavior much less the connection she had with Kate about their refusal to accept what they cannot change. And therefore Joss went back to the gym.

She told the woman that run the classes that her fiancée had gotten over a bruise and so her teacher had given her a cream to use on the bruise and told her to begin covering it up with makeup. Which was not what Joss needed. Yet, across town, Karen finally made a decision on Robert when she decided to fire him. He had apparently gotten to be too judgmental about her mothering skills because he thought his new relationship with her afforded him those rights. So Karen had been all about forgetting him when Vivienne started to cry in the night.

That’s when Karen remembered why she liked Robert and that had made her miss him. So Karen decided that Robert shouldn’t be her nanny however she came to realize that she wanted to date him and later she talked Robert into officially going out with her. And with him just being her boyfriend, they didn’t have to worry about blurred lines anymore or the fact that she used to pay him. But not everyone got what they wanted.

Kate was still disappointed and she had apologized to Joss about her unreasonable behavior though April never got around to doing the same with Marc.

April had been trying to figure out what to do with her life now that art hasn’t worked out and Marc had tried to help. But April just kept on biting his head off after every suggestion and then she found her dream job yet completely cut Marc out of the decision. So April and Marc don’t know what they are to each other and unfortunately they’re not talking to each other in order to figure that out as well.