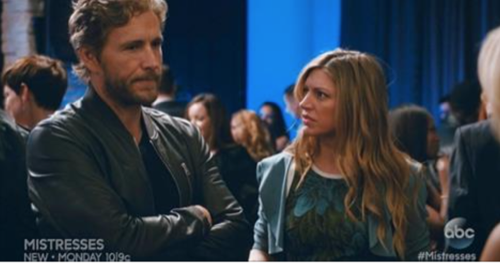 Tonight on ABC their drama MISTRESSES continues with an all new Monday, June 6, season 4 episode 2 called, “Mistaken Identity,” and we’ve got your recap down below! On tonight’s show, Harry’s sister arrives for a visit and reveals that all is not well between her and her fiancé.

On the last episode, in the Season 4 opener, Joss testified at Wilson’s murder trial a year after her perilous encounter with him. Did you watch the last episode? If you missed it we have a full and detailed recap, right here for you.

On tonight’s show per the ABC synopsis “Harry’s sister arrives for a visit and reveals that all is not well between her and her fiancé. Meanwhile, Joss has trouble celebrating her own engagement; April learns about a painting fellowship; Marc joins a band; and Karen bonds with her male nanny.”

Karen was now considered to be something of a sexpert as in an expert in sex. However, the only person that wasn’t enjoying Karen’s newfound fame as a sexpert was the woman herself. Karen it seems had wanted to be taken seriously because she was a doctor after all and had written her book to describe an intense situation, but she hadn’t exactly enjoyed everything that came with writing her new book.

First, there had been an awkward encounter at her Mommy & Me class because some of the other mothers had wanted her advice on feeling sexy again after having a baby. But that hadn’t endeared her to the woman running the class and the teacher had later asked her not to come back because she didn’t the class was a right environment for a celebrity. So that had made Karen feel as if she was being judged and in turn she tried to pull out of a Meet & Greet for the book.

Karen’s new publicist Barbara had booked her for a Meet & Greet at upscale sex shop called the Sex Stop. So Karen had initially tried to get Barbara to drop it because she didn’t want people to see her as someone just meddling sex. Yet, Karen came to rethink her decision when Harry’s sister came to town. Harry’s sister Kate was getting married and apparently she had gone to the States in order to have a final one-night-stand before her wedding.

Only Kate had wanted Joss to help her have her one-night-stand so Joss had needed her friends’ help in convincing Kate to let the whole final hurrah thing go. Kate had said that she talked things over with her fiancée and that Brian was fine with it as long as it happened in the states with an ocean between them. So really there was nothing holding Kate back, but Joss still knew that an affair would be a bad idea and she had gone to her friends after she failed to talk Kate out of it on her own.

But Karen wasn’t much help. Karen had talked to Kate and she had understood the other woman’s reasoning. So Karen ultimately felt like that there was no talking Kate out of it yet Joss still had to try so she had then gone to Harry. Joss had told Harry that his sister was looking for a final fling and he had flipped out. He told Joss that Kate’s idea was crazy and that Joss shouldn’t be helping his sister carry it out.

And she wasn’t, not really. However, she was showing Kate around town and bringing her to the best bars because she didn’t want Kate to get into a dangerous situation out on her own. So Joss tried to get Harry to see that they were on the same side though he wasn’t thinking rationally. He thought that if Joss truly felt that way then she would have come to him first and that he would have handled everything so he later hadn’t trusted her when he couldn’t get into contact with either of them.

So when he couldn’t get into contact with either his sister or his fiancée, he decided to use the family locator option on his cell phone to track them down. And it hadn’t been pretty when he found them with his sister talking to one guy in particular. Yet, there had been nothing he could do. He tried to get his sister and she threw the fact that he was marrying his former sister-in-law back into his face as a way to say that he had no reason to judge her.

And Joss had been hurt by that because she had thought that Kate liked. Only Kate did like her, but she pointed out to them that everyone thought it was weird that now wanted to get married and so she ended up causing a scene. That got Harry and Joss thrown out of the club while she got to remain behind with the guy she had met there.

Only Joss had asked afterwards if he thought that his family was going to have a problem with them getting married and he tried to tell that it didn’t matter. So Joss had gotten upset by that she had wanted to call off their engagement dinner that Karen and April were throwing for her yet Harry told her not to. He said their friends had gone to great lengths to put everything together and that he was going to show even if he had to do so alone.

Yet, they went to the dinner and Kate had surprised everyone by going as well. Kate it seems had read Karen’s book after she failed to have that affair and she had told Karen that the book had helped put things into perspective for her. So that had made Karen’s feel confident again about her book and that’s why she ended up going through with the Meet & Greet at the sex store.

Joss and Harry though hadn’t needed anyone to tell them that they were doing the right thing because Joss finally realized that she had never needed anyone’s approval before. So once she got over the fact that not everyone was going to be happy with their news, that had gotten Harry to lighten up as well. But it had shocked them both when Kate called off her wedding. She had told them that she had only been looking to have an affair because her fiancée had cheated on her and had thought her doing the same would help move pass what happened.

So the couple had been all for supporting Kate, but they had truly looked scared when Kate said that she wasn’t going back. Kate had decided to move to the states so she was going to be staying with the couple for a while and while she had in fact helped Kate both get over her hump and eventually under her male nanny, it does look like Kate was us going to stir few things up on this new season. Though not all of it will probably be good.

April however had tried to go after an Art Fellowship and she had failed to impress the board member that could have sponsored her. So rather than get disheartened because she didn’t get it, April decided to put away her paint brushes and just be glad for the family she has. She has a boyfriend that did get a job in a band and a daughter that’s lying to her about having a boyfriend.