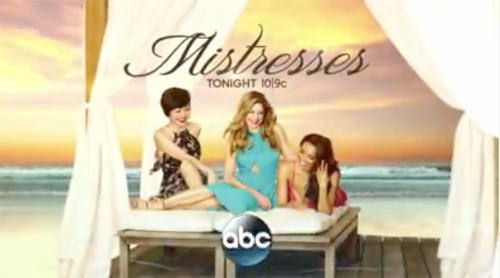 Tonight on ABC their new drama MISTRESSES continues with an all new Monday, July 4, season 4 episode 5 called, “Lean In,” and we’ve got your Mistresses recap down below! On tonight’s show, Karen (Yunjin Kim) stands up for herself in the wake of a bad interview with a shock-jock.

On the last episode, Karen rejoiced in work, even if it means making sacrificed in her love life.  Did you watch the last episode? If you missed it, we have a full and detailed Mistresses recap right here for you.

On tonight’s show per the ABC synopsis, “Karen stands up for herself in the wake of a bad interview with a shock-jock. Meanwhile, April quits her job, but she lies and tells Marc she was fired; Joss and Harry struggle with their new working relationship; and Joss continues to battle PTSD.”

Tonight’s Mistresses recap is going to be an exciting one filled with drama that you won’t want to miss – the producers know they need to get you interested, therefore you can expect a great show. Be sure to tune in for our live ABC’s Mistresses recap tonight at 10 PM EST!

The ladies found themselves in some trouble on tonight’s episode of “Mistresses”. They had all apparently thrown themselves into one work venture or and another and unfortunately it just wasn’t panning out. Karen’s publicist had wanted to create an image of her that made it seem like Karen was some kind of sex expert however Karen didn’t know how to be a sexpert. Karen just wanted to be a therapist. So she agreed to do an interview on some shock jockey’s podcast and she thought that she use that opportunity to state where she was really going with her book.

But sadly for Karen, a podcast with someone as rude as Jason Hughes was neither the right time or right place to sell herself as a serious therapist. Jason had sort of ripped into her because he said her book sent the women’s movement back decades and then he laughed about how women were now either delusional career women that only believed they could have it all or sluts. So the entire podcast had been a mistake and Jason didn’t even give her time to defend herself or her book. And therefore Karen didn’t want to have anything to do with Jason after that podcast was over yet he later challenged to a second podcast.

He said that the first show had given him great ratings and that they both could capitalize on that by doing a second show. However, Karen knew for a fact that a second show with Jason was only going to make her want to kill him. So she tried to tell him no and also said that she had nothing to prove, but Jason managed to push her buttons. He said that she had to come back on the show to prove that she really did believe in feminism else his viewers were going to believe that she was just someone that peddled a sob story about wanting to find real love while in actuality all she wanted was a husband that would give her another baby before she gets too old.

So naturally that had upset Karen and she had still been furious about what he said when she talked to Joss about her podcast though Joss thought that Karen should go back on Jason’s show. Joss had stated that she had also gotten herself in some hot water when she made a PR pitch to Harry’s new business partner and how that had made Harry upset with her. Yet, what Joss did was take some time to calm down and then approach Harry in more business-like manner. And so Joss was able to convince Harry that she should help drum up publicity for his restaurant because she was more than just his fiancée.

Though Joss did eventually have some hiccups with Harry while she working for him. Joss had apparently written a nice little story that would go on Harry’s official bio and she had jazzed it up a bit to make Harry’s backstory more interesting yet Harry had gotten upset with her over it and had actually tried to get her to take it down. Harry had said that he didn’t want to make things up and that doesn’t like the publicity games that she was interested in trying out. So Joss had wounded up in a huge fight with Harry he was right about them working together and it seems her advice to Karen had also backfired.

Joss had told Karen to take a stronger approach with Jason Hughes as a way to keep him from talking over her again. So Karen had done a second podcast with Jason and that time she had made it clear that she would not be dismissed or belittled so she had definitely put Jason in his place. However, that also upset her publicist who felt Karen had somehow crossed the line. Barbra was Jason’s publicist as well and it turns out she hadn’t wanted Karen to defend herself because Jason was currently the client that was bringing in the most cash.

And therefore Barb decided to make a choice between which client she wished to represent, but she didn’t go on to choose Karen. Karen was fired because she had stood up for herself and because she didn’t let some guy bully her or her beliefs. Yet what mattered to Barb was the cash flow so Karen ultimately felt like losing her publicist wasn’t such a great tragedy. So the few drinks she had back at her office made more sure about what she had done and she only went home after she felt she was strong enough to stand up on her own without her assistant to her.

But there was a surprise waiting for Karen back at her apartment. She apparently mystery visitor that shocked her into swearing. Now that person could be anyone though odds are a certain baby daddy might have come back to finally have a relationship with his daughter. And while Joss’s advice didn’t appear to have done anything for Karen besides give her back backbone, Joss was able to fix her own situation by talking things over with Harry again as well as buying him a new motorcycle so that he would stop complaining about the distance from their house to work.

So the only one whose day never turned around was April. Marc had unfortunately found out about the kiss so he had punched Michael yet April had in fact gotten upset with Marc for punching someone because she said she had enough of macho men believing their fists prove something. Though Marc had again gotten mad when he found out April had later gone to see Michael to apologize for Marc’s actions. Marc thought that was taking it a step too far and he was even more mistrustful when April came back and Michael wasn’t hurt by what March did. And that if anything Michael was surprisingly pleased with getting punched because it made him feel like a real man.

Michael had revealed to April that he was born a woman and was now a transgendered male so it seems that April and Marc for that matter if the first people that never knew he wasn’t born anatomically male and that he hadn’t meant to deceive anyone, but that he liked being treated just the same as any other guy. So in a way Michael got exactly what he wanted with Marc because Marc still didn’t want April to work with some guy that was interested in her. However, April it seems had gotten some bad advice from Kate because Kate had told her that maybe the kiss didn’t mean anything because the bond she had developed with Michael could have been an intense sisterhood type of thing.

Yet, a transman should not be seen the same as a woman because he was still a man. So even as April was able to convince Marc that it would be fine if she worked with Michael, Michael no longer wanted to work with someone that was denying the person he was. He was a man, he felt like a man, and identified as a man so he hadn’t wanted to be seen as a woman. And that’s what April was doing albeit unintentionally.

So April back out of the interior designing business meanwhile the woman that had given her bad advice was suddenly going back on her own principles to date a married man that claimed to be separated.