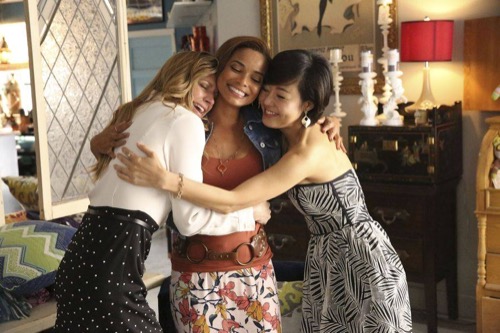 Tonight on ABC their new drama MISTRESSES continues with an all new Monday, August 29, season 4 episode 11 called, “Fight or Flight,” and we’ve got your Mistresses recap down below! On tonight’s episode, Karen (Yunjin Kim) fires Lydia (Alanna Masterson) when she uncovers her deception. Meanwhile, Harry (Brett Tucker) juggles too many business opportunities.

On the last episode, Marc focused on his music and bonded with Sofia. Meanwhile, Lydia tried to ruin Karen’s new romance. Did you watch the last episode? If you missed it, we have a full and detailed Mistresses recap right here for you.

On tonight’s show per the ABC synopsis, “Karen fires Lydia when she uncovers her deception. Meanwhile, Harry juggles too many business opportunities; Joss and her impact-class pals want to avenge their friend’s killer; and Marc resists April’s attempt to reconcile.”

Harry confronts Joss about her pills. She says that it is her friend’s not hers. The fight escalates, Joss is clearly feeling cornered and April talks to Karen about Marc. Why hasn’t he called?

Lidia gives Karen her notice. She needs to have a social life. She also blames the commute. Karen tells her how much they need her. Lidia is quickly won over by this.

Harry is going to do The Food network for a second season. David, who just discovered that his audit is over, is disappointed by the good news. He wants to dazzle Harry with a better offer. He asks for more time. Harry agrees.

April and Marc finally come face to face at their daughter’s school. April tells Marc that she kicked her mother out. She wants to talk to him about their relationship, but their conversation is cut short when Marc’s new girl beeps the car horn, yelling – Come on Baby we have to go.

April is caught off guard and upset. Marc explains that they were broken up.

Joss’ mental state is further destroyed when Marseilles’ ex shows up looking for Jackie. He blames Jackie for the death. He’s threatening and angry.

At work April goes off on a tear about Marc. In the midst of her tiny break down Michael comes in, surprising her. He wants to catch up and be friends again.

Karen and Adam go out for lunch. Karen is thrilled with their relationship. Adam gives her onyx earrings. She cries happy tears. Karen wants to introduce him to her friends.

Marc pays Harry an unexpected visit.  Marc notices that Joss has been sleeping on the couch. Harry explains that things have become very dark. Marc wants to know more.

Marc tells Harry about his run in with April and the fact that he slept with Sofia. Marc likes how Sofia, she makes him feel good. He isn’t sure who he wants to be with.

Lucy has been dumped by her boyfriend. She is going out to dinner with Marc. Lucy is upset to hear the news that Marc is seeing someone else. Lucy doesn’t want to go now, but April tells her to.

Karen and Adam host the girls for dinner. When they discuss how they met, they discover that something is wrong! They both have 2 different stories. Will they find out Lidia is behind all of it?

April is angry that Marc slept with someone. Michael says “so what”, and tells April to keep fighting.

Karen confronts Lidia. She is crying. She feels violated and angry that Lidia used her profile. Karen tells her that she will be letting all of the agencies know that Lidia is not fit to work with children.

Harry meets Jonathan and a group of his associates.

Joss is setting up Marseilles’ ex at a bar. She is trying to talk to him, to get him alone.  He agrees and Joss plays a manipulative game, blaming Jackie.

All of the women from the club are in the van. They plan to take him on until they see a gun. Joss gets out of the van against their pleas. She beats him with the gun before turning it on him and the girls. She realizes what he has done, tosses the gun and runs off.

Karen and April are both upset. Kim reaches out to Adam, leaving him a voicemail. She wants him to come over.

Marc has made a decision – he drops Sofia’s key off into her mail slot. He shows up at April’s late. He wants to talk. April admits to her downfalls. Marc is ready to get back together.

Harry and Joss finally get on the same page, apologizing to one another. Harry admits that he tanked his career while Joss admits that she needs help.

April is crying and she has good reason – she is pregnant!