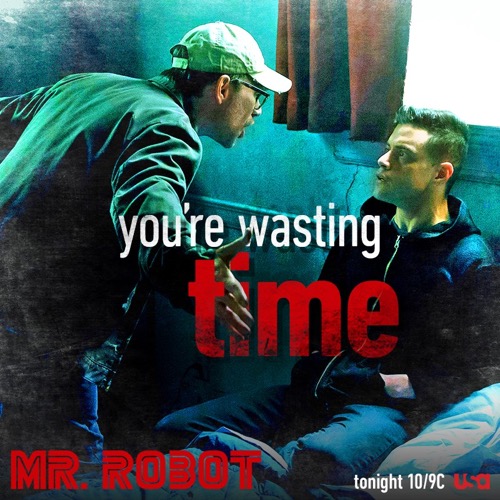 Mr. Robot returns to the USA network tonight with an all new Wednesday, August 10, season 2 episode 6 called, “eps2.4_m4ster-s1ave,aes,” and we’ve got your Mr. Robot recap down below! On this evening’s episode, Mr. Robot (Christian Slater) tries to show Elliot (Rami Malek) that he can be useful .

On the last episode, Elliot couldn’t quit the game; Dom and the FBI headed to China to investigate 5/9; Joanna was haunted. Did you miss the last episode? We’ve got your detailed Mr. Robot recap right here.

On tonight’s episode per the USA synopsis, “Mr. Robot tries to show Elliot that he can be useful; and Darlene and Angela’s plan doesn’t go as hoped.”

Elliot had apparently broken one of Ray’s golden rules. When Ray had told him not to look at anything else, he had meant it and it turns out that rule had been in place for Elliot’s own good because Ray then had to punish Elliot for looking into his online business. Ray’s online business was practically a hot bed for crime. He was into drugs, murder for hires, and practically anything that he deemed profitable. So Elliot had thought that he should do something about Ray and his illegal network, but Ray had found out what he was up to and had set some of his guys over to Elliot’s place. Where they then beat Elliot within an inch of his life.

So Ray had meant it when he told Elliot not to get curious. However, the beating itself had barely registered with Elliot because he had simply escaped into his mind. Elliot had woken up in a world with his parents and sister and everything had at first seemed fine yet there had been a few things that had just been too strange and so that’s how he knew the world wasn’t real. His father wasn’t alive for instance and he also kept hearing Tyrell Wellick in the truck of the family car so Elliot had tried to put a stop to the fiction and Mr. Robot wouldn’t let him. And oddly it was Mr. Robot that appeared to be in control of himself or itself.

In that world, Mr. Robot kept trying to make light of everything that happened and get Elliot to laugh at what they most likely did together. Like holding Tyrell hostage or playing a part in Giddeon’s death. So it had taken Elliot some time before he realized that Mr. Robot was trying to get him to accept what he could not change. But then came the worrying part because Elliot thought that Mr. Robot had taken over and fortunately Mr. Robot said that it was merely temporary. Mr. Robot had taken Elliot into that world so that he could live through the beating and in the end he had given him back the body after Elliot had been taken to the hospital.

Although, Ray had been at the hospital. Ray had also been as cryptic as ever when he started to talk to Elliot about his dog Maxine and the pooch had recently been ill however he had told Elliot that he would see him later and that had sounded like he was telling Elliot that he still wanted Elliot to help with his business. So Elliot still wasn’t safe from Ray because it seems that the beating had merely been a warning and not what Ray would have done to him if he was no longer useful. And unfortunately, the beating also put Elliot out of commission just as Angela was given a suddenly harder task.

Angela had been nervous already about bugging the FBI yet her task became harder after what happened in Beijing and so everyone thought that she needed more time to practice what she had to do. The terrorist attack on the FBI had ended in the deaths of numerous agents. So their headquarters all across the country, nevermind the one in E Corp itself, was now going through additional security measures and it turns out that was on the Dark Army who aren’t in leagues with fsociety anymore. The Dark Army was suspected to be behind what happened in Beijing because Dom had recognized their masks at the airport and the Dark had in fact been behind what happened to Darlene’s ex.

Darlene’s hacker ex-boyfriend had been held down as something was injected into his fingertips. Yet, that injection hadn’t killed him straightaway because he had enough time to go over to fsociety’s new headquarters where he had been seen by Angela. Angela though remembered him. Angela remembered that he was the guy that had sold her boyfriend a disk that had stolen everything from his computer. Including Angela’s bank information and pictures. So it had been because of Cisco that she thought her life was in danger and thanks to him she had taken part in 5/9.

So seeing Cisco with Darlene had made Angela question just who she was getting mixed up with. However, Darlene refused to listen anyone when they said Angela wasn’t ready so she made Angela go through with it despite everyone misgivings and made sure to do her part. Darlene was across town and illegally using someone else’s hotel room as she stay connected with Angela though Angela ran into a few problems on her end. Angela had met an agent that had taken “special” interest in her and he revealed himself to be a jerk when she tried to turn him down gently. And so that had left Angela with little option.

Angela was forced into accepting a date with a guy that couldn’t handle rejection and to make matters worse she had been spotted on the FBI’s floor by more than one person. The FBI were apparently moving offices after this latest attack so that had meant there weren’t a lot of people around to suspect Angela, but her nerves had still been frayed by going up on the floor. So Darlene had had to hold her hand the entire way through with planting the device and then came the harder part because the device’s wifi had failed. And Angela had needed to fix it from her computer which was thankfully back at her cubicle.

But Dom had been one of the two agents that had spotted Angela so she had followed Angela back to that cubicle where she wanted to talk. So Angela found herself trapped. She couldn’t keep working on the hack with Darlene on the phone to guide her because Dom was there and she couldn’t stop what she had started because Darlene needed the device to be working to erase security footage of what Angela did. And so Angela found herself having to answer why she was on that floor to begin with.

While Elliot found himself getting dragged out of his hospital bed!